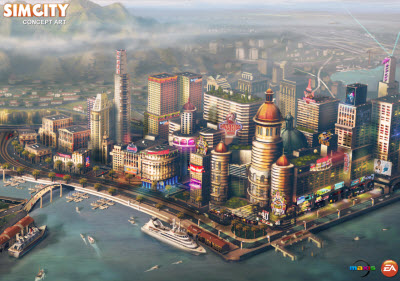 In a conference call with analysts, Moore said EA will release the game this quarter, but he declined to name it. Rumors have persistently circulated that EA is working on a Facebook version of SimCity. That title could stir excitement for SimCity (pictured above), which is coming out on the PC later this year as a full-fledged disk-based game.

EA’s last big social title, The Sims Social, soared to tens of millions of users on Facebook last year and temporarily took the No. 2 rank on the social network, second only to Zynga’s CityVille.

The social title is part of EA’s push into digital gaming, which accounted for $1.2 billion of EA’s $4.1 billion in revenues during the past year.

Social is not yet a huge contributor to EA’s bottom line, but it is strategically important because of EA’s competition with Zynga. In terms of contributing to net income, EA chief executive John Riccitiello said on the call that “social is moving to a good place.”