Hardcore gamers are getting a taste of the future of online games today, as Electronic Arts unveiled its new free-to-play Command & Conquer online gaming with cool 3D graphics. The real-time strategy game looks like a traditional PC title in terms of the quality of its graphics, and it taps the same Frostbite 2 technology used in EA’s high-end Battlefield 3.

This new Command & Conquer ships in 2013, and sign-ups for a closed beta test begin today. EA is transforming the previously announced Command & Conquer Generals to become part of this new digital experience. EA says gamers will get “complete access to the cutting-edge visuals, sound and destruction of a full triple-A strategy game — for free.” The game will be part of a larger Generals Universe that will have many free-to-play titles within the Command & Conquer franchise. 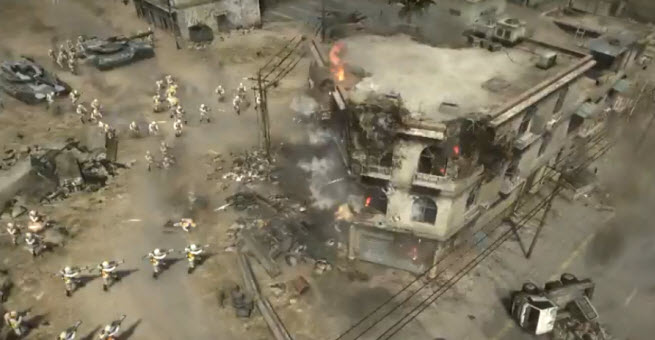 Redwood City, Calif.-based EA is leading the charge into digital games (social, mobile, and online titles) with $1.3 billion in digital revenues in the past 12 months. The Command & Conquer online title will be a real-time strategy game with aerial, armor and infantry combat units, just like all of the traditional C&C releases. EA made the announcement at the GamesCom show in Cologne, Germany.

“We are thrilled about this opportunity to transform Command & Conquer into a premier online experience,” said Jon Van Caneghem, the vice president and general manager at EA. “For nearly two decades, this franchise has existed as something you buy; now we are creating a destination where our fans will be able to access the entire Command & Conquer universe, starting with Generals and continuing with Red Alert, Tiberium, and beyond. With Frostbite 2, we are able to keep an emphasis on the triple-A quality our consumers expect while staying true to the RTS gameplay they know and love – all available online for free.”

Players take control of a faction, compete for resources, build up bases, and lead masses of tanks, soldiers and aircraft into battle. The game features fully destructible environments, dynamic physics, and graphics that are rare for online-only games.