Blizzard’s Hearthstone: Heroes of Warcraft has paved the way for collectible card games on mobile, a new $1.2 billion category. And Electronic Arts is hopping on that road today with the limited launch of its free-to-play Plants vs Zombies Heroes collectible card game for mobile devices.

The launch comes just two weeks after EA launched its Plants vs. Zombies: Garden Warfare 2 shooter for the PC and consoles, and it gives tens of millions of PvZ fans one more way to enjoy a franchise that has generated huge revenues for EA and its PopCap Games division. It also gives EA an offensive weapon to compete with Hearthstone, which has generated more than $500 million in revenue for rival Activision Blizzard on both mobile and PCs.

Plants vs. Zombies has proven to be a resilient franchise ever since it debuted on the PC as a tower defense game (where you defend your base from waves of invading foes) in 2009. EA, which acquired PopCap Games in 2011 for $750 million, has been busy taking PvZ into shooters with the Garden Warfare series, and now it is creating a new setting for turn-based gameplay.

The game is available now on iOS and Android mobile devices in select territories, and it will go worldwide soon, said Brian Lindley, senior producer at EA, in an interview with GamesBeat.

“We’re going beyond the backyard,” Lindley said. “We want to bring collectible card games to the masses. There’s are lot of tweaks, but we kept the emphasis on characters. It is accessible, with a lot of depth. Our mission is to bring more players into these kind of games rather than compete with other CCGs.” 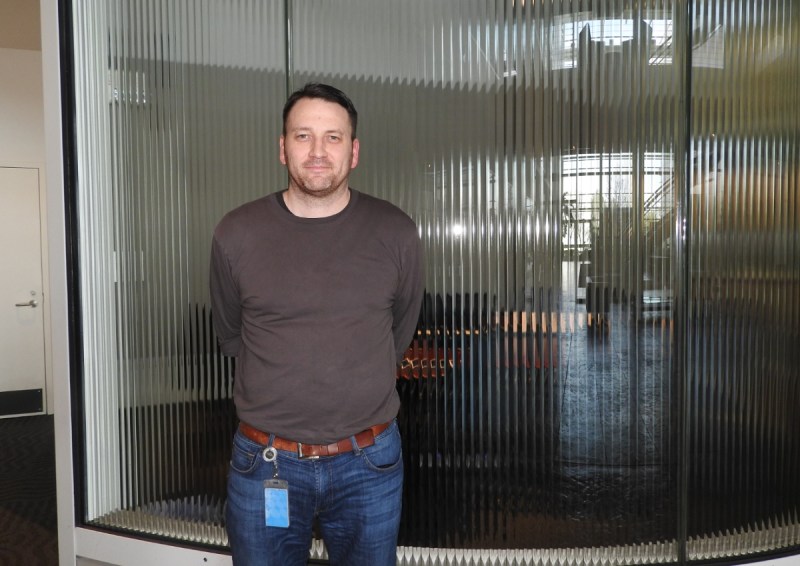 Above: Brian Lindley, senior producer at EA, on Plants vs. Zombies Heroes.

PopCap creative director Devin Low started work on the game more than two years ago as a paper prototype that he built during his spare time. He experimented with many types of cards and playtesting. EA liked the idea so much that it turned the game into a digital title, with a focus on mobile.

PvZ Heroes introduces a new class of characters to the PvZ Universe: Super Hero Plants and Zombies. These heroes include The Green Shadow, an elusive but powerful peashooter, known for taking out zombies with her Precision Blast. Another is Impfinity, a Zombie Imp Hero with the ability to create multiple Imp clones during battle. PvZ Heroes will also include new characters from Plants vs. Zombies Garden Warfare 2 like Super Brainz, Z-Mech, Citron, and Rose. It launches with a dozen Heroes and hundreds of other characters.

To play, you pick your favorite Hero, assemble the rest of your team, and then go into a match against another human player. Like some card games, you have multiple lanes of combat, and you have to play better cards in each lane to defeat your opponent. You can challenge your friends, experiment with different Heroes, and play single-player missions or dive into multiplayer.

The game has a total of 300 characters. EA hopes that the variety and the humor around them will make its collectible card game more accessible. When you see a new character, like an evil Zombie scientist, you see an animation that is like a motion comic. There are funny characters like Smashing Pumpkins.

“We took inspiration from other CCGs out there, and some of the team worked on Magic: The Gathering in the past,” Lindley said. “Hearthstone is both inspiration and competition. They took the genre in a good direction.” 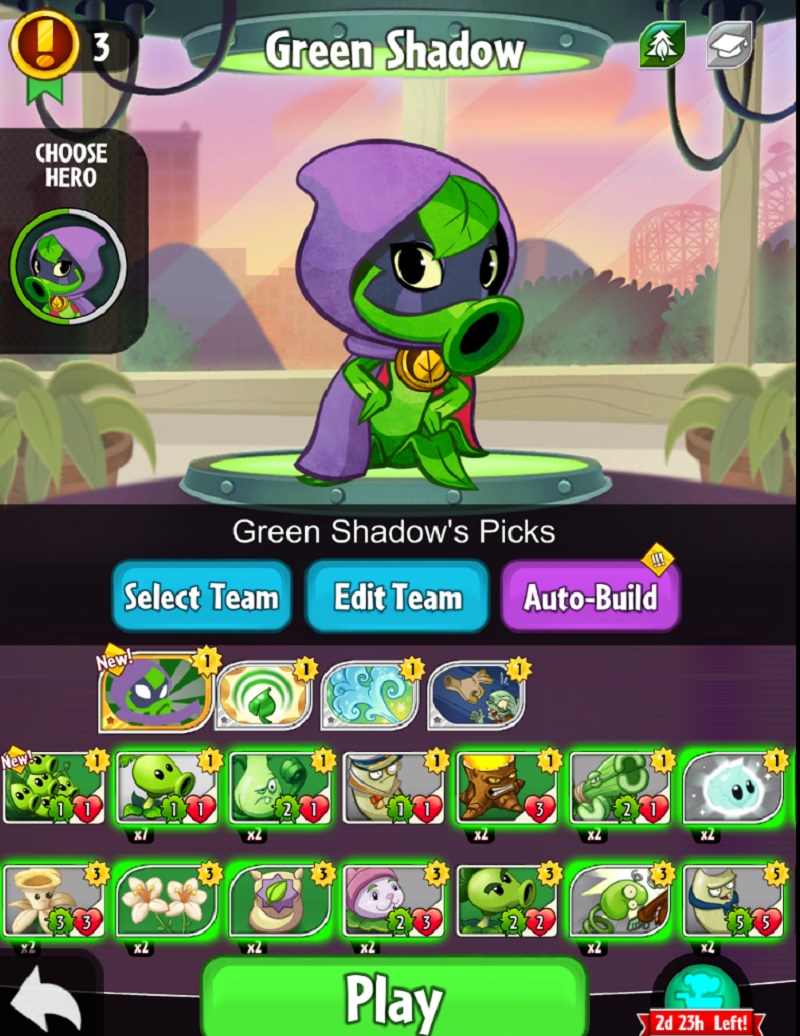 Above: There are 300 characters in the Plants vs. Zombies Heroes collectible card game.

The idea is to have quick games lasting three to five minutes. About a third of the characters are easily accessible, but you may have to dish out real money to buy character packs to get more characters. You can eventually earn all of the characters without paying.

EA plans to update the game frequently with new content. The story has Dr. Zomboss, the zombie scientist, experimenting with turning zombies into Super Heroes. The experiment goes wrong and he creates both zombie and plant Heroes.

You need sun energy to make moves on the plants side. When you play a card, an enemy can attack. You always get a chance to attack back. To win he game, you have to defeat the enemy Hero and defend your own. You can buff your units to make them stronger. Some units can only be played in water or roof lanes. Once you reach a certain level, you can start playing as zombies. Zombies have their own advantages, like hiding played characters under gravestones so you can’t see their capabilities.

A Hero can block damage coming in or launch a superpower that can swing the battle back in your favor. Crazy Dave, the maniac who sells you weird items in the series, makes an appearance and introduces you to the single-player campaign, which consists of various quests. You can play in a casual mode or go into ranked play in tournaments.There are 20 unique adventures and five battles in each adventure, making for 100 battles on each side.

This mobile game has some links to Garden Warfare 2. I played a round of the game with Lindley, and it was very intuitive, particularly if you’ve already played other PvZ games before. 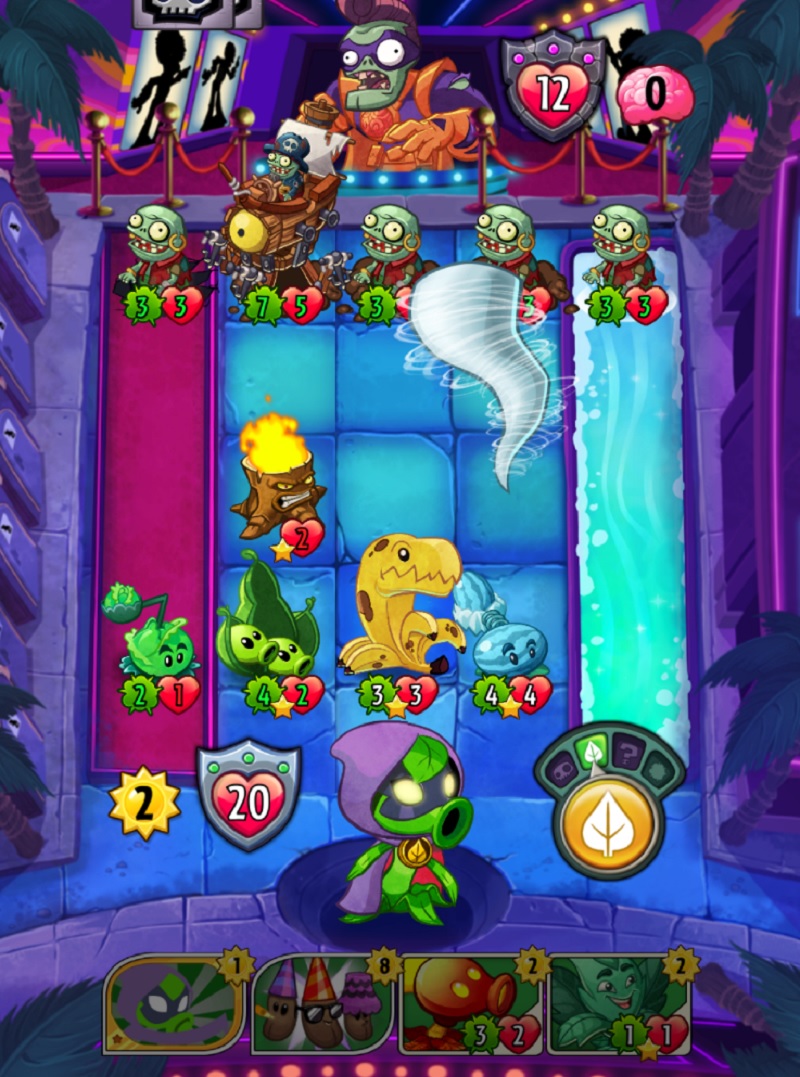 Above: You have to fight in familiar lanes in Plants vs Zombies Heroes from EA.