Electronic Arts is betting everything on a successful transition to the next generation of video games. And the man who has to make that happen without any major ambushes, car crashes, fumbles, or train wrecks is the guy in charge of EA’s major game studios.

Frank Gibeau is the president of EA Labels, the division at Electronic Arts that produces games including Battlefield, Madden NFL, Need for Speed, The Sims, and Star Wars: The Old Republic. Major studios such as DICE, BioWare, EA Sports, and PopCap Games report to him. It’s a big job, and, after years of struggle, it may be that EA is finally getting big results. At the recent Electronic Entertainment Expo trade show in June, EA came away with accolades for Titanfall (which it is publishing for Respawn Entertainment); Battlefield 4, which is coming this fall to current-generation and next-generation consoles; and the zany Plants vs. Zombies: Garden Warfare.

Gibeau is often named alongside chief operating officer Peter Moore as a candidate for EA’s chief executive officer job. The company is searching for a replacement for John Riccitiello, who left in March, and longtime former EA CEO Larry Probst is executive chairman. But EA is running on autopilot in part because of executives like Gibeau, who has worked at EA since 1991. We caught up with him for an in-depth interview. Here’s the first of two parts of that wide-ranging discussion. (See part two here). 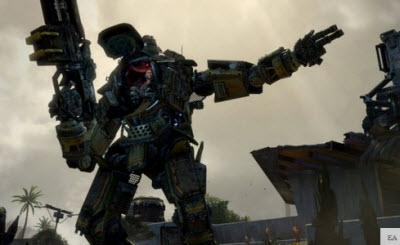 GamesBeat: I thought you guys probably had the best lineup I’d seen from EA in a long time at E3. How did that come together?

Frank Gibeau: Well, I’ve been working my ass off for two years on it. [Laughs] We started planning for the next-generation systems about two years ago, putting together the core technologies and the teams. A lot of our best engineers, artists, and creative directors have been working on it quietly since last year. When you reach a transition, you get to try all kinds of new stuff. We had this crazy Garden Warfare idea that people started getting fired up around. We had the relationship with Titanfall coming together. We put together a tight plan for technology, talent, and product. E3 was the big unveil we’d been working toward. It was a great time.

GamesBeat: It seemed like there was a strategy before to do a common, universal engine. It didn’t work so well with Criterion, but it seems to have come together with Frostbite.

Gibeau: I was around for that. I was on the publishing side of the business when we bought Criterion. The idea was that RenderWare would power all of our games in the last transition. The problem was that it wasn’t ready for prime time. It hadn’t shipped any games. The tools, the pipelines, the tech just weren’t mature or complete. Then I took that learning because in my role as the head of the studios, I had to make sure we understood how we were going to manage the technology.

We understood the architecture of these machines was very different from last time. Looking at the opportunities there, we went after Frostbite [Battlefield] and Ignite [on the sports side]. We created two technology paths and invested early and got them to the point where we were able to ship games on them. We weren’t fighting the engines as we were developing. In the last cycle, the engines weren’t done. Guys were fighting the tools. They weren’t spending any time polishing the games while we were starting new [intellectual property]. So we wanted to de-risk the technology piece as much as possible.

That was the key learning. You nailed it — we blew the last transition because we relied on RenderWare. It didn’t work. It set us back for multiple years. I was not going to repeat that mistake.

GamesBeat: Digital games was a very big mantra for a while under John Riccitiello. Is that still the case, that digital matters in big ways and that you’ll continue to experiment to make it grow up as big as physical?

Gibeau: It’s not an experiment. It’s a full commitment. We burned the ships and marched inland. [Laughs] About 76 percent of our revenue this quarter was digital, not disc-based. We’re off to the races.

The digital capabilities of the next-generation consoles are extremely powerful. The business is going digital. Mobile. Asia. A significant part of the business is in Asia. Does that mean retail is going away? No. But it’s not an experiment. It’s what we’re all about.

The quarter was a bit of an anomaly because we didn’t put out any blockbuster console titles, but our biggest retail partner, measured by dollar volume, in Q1 was not Best Buy or GameStop. It was Apple. That’s never happened before. John Riccitiello started us on this course, but we embrace it, we support it, and we’re going to take it to new heights.

GamesBeat: EA is releasing its first quarter earnings today – what can you tell us about the results?

Gibeau: I think the quarter is notable because 76 percent of EA’s revenue came from digital goods and services – primarily from mobile games as well as Battlefield 3 and FIFA 13. We didn’t have any major releases in the quarter but the digital percentage tells a story about how the company, the games, and the consumers have changed. Battlefield 3 has been in the market for more than 20 months and online players are still pushing it to the top of the charts.

Also, for the first time in EA’s history, Apple was our biggest retail partner. Again, that tells a story of the success of our mobile games with titles like The Simpsons Tapped Out, The Sims Free Play, and Real Racing 3.

Above: Plants vs. Zombies: Garden Warfare

GamesBeat: We’re seeing some imaginative use of the Frostbite engine in Plants vs. Zombies: Garden Warfare. I would have never guessed that was coming.

Gibeau: PopCap has been a great company for us. They have a very different culture than any other type of studio that we had inside. Obviously, they have some crazy intellectual properties. On top of it, we put some EA guys from our Vancouver studio into the PopCap organization, and they worked together to come up with this idea. When they first brought it forward, frankly half of us hated it. [Laughs] Another half of us saw the potential in it. I greenlit the game because I thought it was fun and because it was time to try some different things, to take some risks. The combination of EA console developers and the PopCap creative direction and brands, it is really working out.

GamesBeat: What about the Modern Warfare pun? How did that happen?

Gibeau: That was part of the initial pitch. It was Plants vs. Zombies: Garden Warfare — Plants vs. Zombies as a shooter. I was there. Half the room was like, “This is the dumbest idea I ever heard in my entire life.” The other half was like, “Wow, this is really cool!” We brought in some consumers, gamers, and showed it to them. They helped us edit it a little bit and refine some things.

GamesBeat: When a console transition comes along, it’s always been very hard for companies to try to do it in a graceful way. If the tech comes together, that makes it a lot easier. It is hard to have to keep people doing old-gen games while you get people on next-gen games. That would increase your costs.

But if you have a common technology, that seems to reduce costs. It sounds like that’s an explanation for why can try to go through the transition without raising your expenses a lot.

Gibeau: Frostbite has been the core difference. When you have a proven technology base with tools that work and you’re able to move teams around, because they’re all trained on the same engine, it makes for efficient and low-risk development. That was a critical decision, to invest in that early on and put the resources in. It causes stress in other parts of the business because a lot of our top guys were working on next-generation behind the scenes. But that was a big breakthrough for us, for sure.

We are reiterating that we intend to exit this year with spending flat, year-over-year. During a console transition year, that has never happened. I think in the last transition, our R&D went up 30 percent. The fact that we’re cranking these kinds of games on flat spending is astonishing.

GamesBeat: To make that happen, it seems like you’re still making some tough choices. I’ve seen a lot of studios close. I don’t know if they might have lived on in another time or another place. Can you talk about some of the decisions you have to make so that this flat spending can happen?

Gibeau: The studios that we have at EA — Maxis, PoCcap, BioWare, DICE, Criterion, the EA Sports studios, the Firemonkey guys — they have proven and sustained a high level of performance over many years. It’s a testament to the great creative leadership and talent there. They also have been able to understand and anticipate the market in ways that have been very insightful.

Now, in every one of the cases where we shut down a studio because the strategic fit wasn’t there, or the opportunity wasn’t there, and we needed to think about our resources in a more perishable way, we would transfer the talent. Folks in a given studio were given the opportunity to move to another part of Electronic Arts and join new teams, join new IPs. Technology and talent don’t always fit with where the future is going. We make decisions to get us into the best position possible. But we always look at the individuals inside those studios, and we’re able to move them around and get them into position. If you look at DICE or EA Sports, there are folks from other studios. That’s one of the key things for EA: to keep our talent base diverse but always constantly growing.