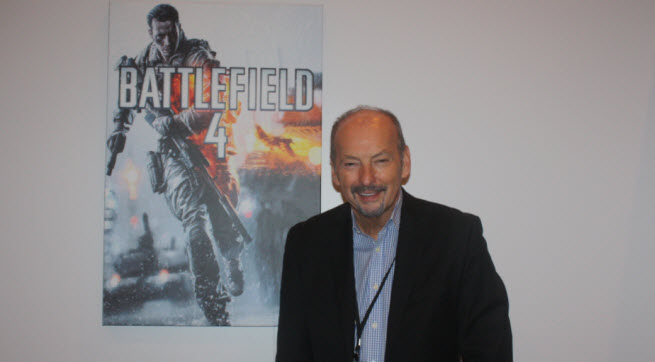 Few companies are betting as big on the next-generation consoles as Electronic Arts. Peter Moore, chief operating officer at EA, believes that the enthusiasm for those new consoles has never been higher, thanks to a series of big announcements at the Electronic Entertainment Expo (E3) video game trade show in Los Angeles this week.

Here’s our edited interview with Moore.

GamesBeat: Do the show and the industry look good to you overall? 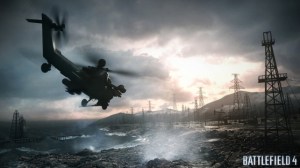 Moore: I think so. It’s funny. I was afraid, or at least concerned, coming into E3 that the conversation would be about, “Do we need consoles anymore. Is there a reason to buy next-generation consoles? Is this the E3 where we shift away from game-specific hardware?” We’re exiting E3 today with less about “Should we?” and more about “Which one?” That’s good news for the industry. From what I’ve seen of gamer reaction – I’ve talked to a lot of people here – and what I see online at night as I go on the forums and the blogs, the conversation has shifted nicely. They’re confused, but they’re excited. That’s good for us. Will the industry grow as it’s done in previous generations? I think the answer’s yes.

GamesBeat: The used game thing has been an interesting sideshow.

Moore: It’s a sideshow, yeah. It’s become emotional. It’s confusing. I think it calms itself down. It was funny to me that we’re all focused on coming to E3 and getting our new games in place, because that’s what E3 was about, and yet the conversation was looking back on used games.

GamesBeat: There are all these emotions tied up in it. Things like, “Do I get something for free? Can I try something out?”

Moore: That’s the issue. It didn’t take us by surprise, but all of our work and all of our focus in these last three weeks is on getting Battlefield ready for prime time. Then Microsoft forgets to plug in the audio. It’s just disappointing that we get caught up in talking about business models when we should be talking about how great the games are, what are the games of the show, things like that. That has been a sideshow and a distraction. The industry spends a lot of money coming here to show off our games, and all we can talk about is used games? 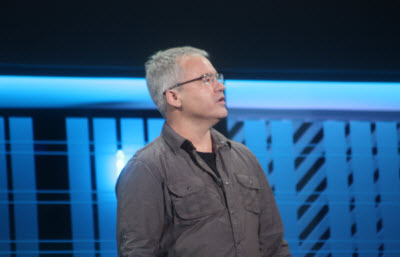 GamesBeat: I don’t know if you get reports like this about what got tweeted the most or whatever. Is there a conversational change, though? People want new consoles?

Moore: It’s my sampling. I’ll sit and marinate on the boards and forums and get a feel for the mood. The mood coming in was, “Boy, they better show me.” There was disappointment with Microsoft’s unveil, that there were no games. It was show-me time.

GamesBeat: Used games were sort of the threat that they were using. “If they don’t let me play my used games, I’m going to mobile. I quit the console business.”

Moore: Yeah. But then they won’t like mobile because they don’t like free-to-play. You have these sidebar conversations that unfortunately circle around business models rather than the content. That’s not why we come to E3. We can go have a conference somewhere cheap to talk about business models.

A lot of the conversation started to shift, though. I think next year, it all changes. Everything will be clear by then. The consoles will have shipped and then we’re in that golden period of developers on their second game and starting to show pre-alpha. They get used to the hardware. They know what its limitations are. We start to see better games.

I have a smile on my face coming home today. It was probably a clenched jaw on Sunday morning when I got off the plane.

GamesBeat: Which of your games got the best reactions?

Moore: If I were to pick two—There’s the obvious ones. 64-player Battlefield 4, the line’s been out the door. It has been spectacular. I haven’t met anybody that didn’t have a great time. I played on stage in the Monday press conference. So that doesn’t surprise me. FIFA doesn’t surprise me. Madden looks magnificent.

The two real hits that have been interesting, though, and they couldn’t be more opposite — Titanfall has been a huge hit. It’s a candidate for a lot of Game of Show awards. And then Plants Vs. Zombies: Garden Warfare. Two ends of the spectrum, which makes me smile about EA. You can have a game like this and a game like that and those are the two you’re talking about. It’s a testament to who we are as a company.

GamesBeat: Titanfall had some very small things that I thought were very good touches. Being able to run up a wall and go to a second floor that way. 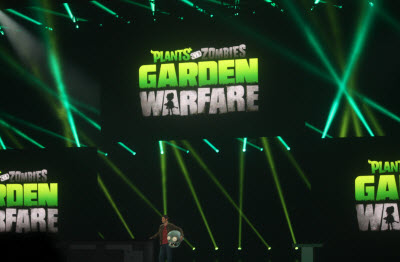 Moore: You have to get up a real head of steam up to do that.

GamesBeat: It was too bad somebody scooped you and found the posters for Garden Warfare. That would have been a great surprise with the Battlefield-like trailer.

Moore: You forget about that the week after, though. Those will be the games for us. The Mirror’s Edge and Star Wars: Battlefront teases were clearly big. I had a unique perspective for the unveilings, because I was behind the stage, ready to come on stage. Looking at 4,000 people like this when they see Mirror’s Edge, I wish I had taken a photograph. First they think it’s Mirror’s Edge. Then they’re not sure. Then, boom. Same with Battlefront. We showed some snow, right? “Woohoo!” As soon as the walker’s foot came down, they knew exactly what it was and the place went nuts. That moment there, where I’m about to close the show — the entire audience is just lit up, when you’re looking from behind the stage. I was very happy with our show.

GamesBeat: The interesting thing to me is that all of these things are on Frostbite. Plants Vs. Zombies, Mirror’s Edge, Battlefield. Even Command & Conquer, right?

GamesBeat: That’s very cool. I’m sure your CFO gets excited about that.

Moore: You were at our investor breakfast yesterday, and you saw Frank Gibeau’s slide. You can find it on the web. It’s an interesting little item for you to write about. I think Frank said we were at 17 engines at some point. He put that slide up. NBA had its own engine.

GamesBeat: And then there was RenderWare, which didn’t work.

What it means for the company – and you’re right, the CFO loves it – is you’ve got EA Sports Ignite and you’ve got Frostbite 3. You’ve got bits and bobs here and there, but that’s about it. The great thing about it is for our people. You have a bunch of guys in Montreal. You need some help from a team in L.A. We can move people around just like that. It’s great for developers. “Go live in L.A. for six months and help us finish up a game.” “Sure!” And off they go. We don’t have to train anybody, because they already know. It’s our own engine and our own intellectual property.

GamesBeat: Did the reuse of Frostbite 3 across games also have something to do with Larry saying that in this transition, you’re actually going to be able to hold costs fairly flat?

Moore: It wasn’t the edict. It was that you can hold costs because you’ve got R&D that is so much more cost-effective, because you don’t have so many engines you’re working on. We have held costs. That’s an unbelievable achievement for this company. To deliver all the next-gen you’ve seen at flat operating expenditures? That is a big deal.

GamesBeat: Where do you say you’ve put your chips on the table now? You’re at a point where you know you can’t do everything. You have some chips to lay down on certain parts of the industry. Where are the chips down?

Moore: Certainly we have strategic objectives for the company. Nailing next-gen is a strategic objective. This company needs to get back to where we were, and I’m confident that we will be where we were on the PlayStation 2 platform. We got in early, made big bets, did things like game engines that were focused on next-gen, delivered big franchises, and had some new IP at the beginning that allowed us to get after the business on a broader basis. I’m feeling that again. We will tell you that we didn’t do that as well in the last generation. 360 and the Wii and the PS3, we didn’t get after that.

So nailing next-gen is one. Driving our mobile business, which has a huge growth potential, is one-A, as we would say. Mobile continues to be a very important part of our business. Simpsons: Tapped Out, Tetris Blitz, Real Racing 3, Sims Free Play, all of these titles are growing. They’re growing our user base. They allow us to ride out the trough that we’ve seen over the years. If you were console-reliant, the valley gets a little deeper, and then the peaks go up. This flattens it out and smooths out the edges. Mobil does that for us. Free-to-play does that for us. Our downloadable content, FIFA Ultimate Team, Battlefield 3 Premium, that’s still selling. The smoothing-out of those valleys is very helpful for us.