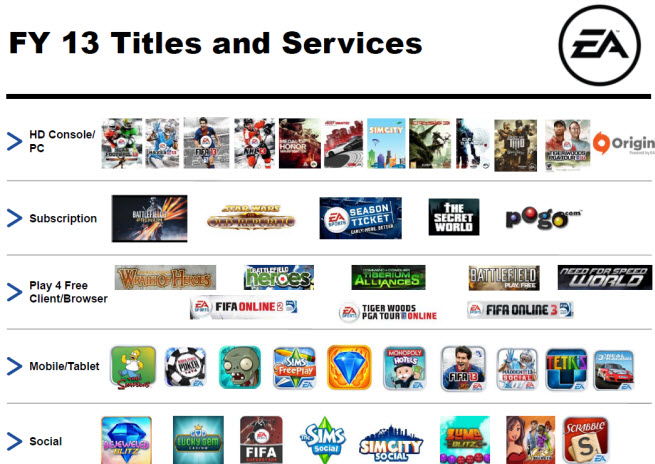 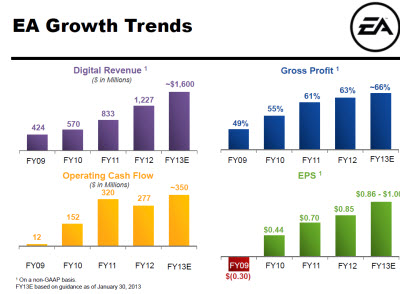 The duo said that gamers are gravitating to blockbuster hits, leaving a lot of losers in the business. And they believe that next-generation consoles from Microsoft and Sony will help turn around the industry’s sinking retail game sales. These words will be both encouraging and discouraging to other industry players, as EA is so large and diversified that it is a bellwether for the business.

EA’s own strategy has been to weed out its portfolio and focus on its best game properties, such as FIFA Soccer, Madden NFL, and Battlefield. Riccitiello said that the top five games accounted for 40 percent of industry profits in 2011, and they probably accounted for 50 percent of industry profits in 2012. He thinks that FIFA and Battlefield have the chance to be in the top two, though he cautioned that those titles will not account for all of EA’s profits or revenues in the future.

“There is a clear distinction between winners and losers, and in Q3, EA had both,” Moore said.

Moore noted that while overall console game sales in stores have fallen recently, the “standard definition games,” such as those for the Nintendo Wii, have dropped 40 percent in the past year while “high definition games,” such as those made for the PlayStation 3 and Xbox 360, have dropped only about 13 percent in the year. EA focused on the HD games.

EA is investing heavily in a future Battlefield game, but it is showing no mercy to its “losers.” Today, Moore said that EA will take its Medal of Honor property “out of rotation” — essentially canceling it. That means EA will give it a rest, since the latest Medal of Honor: Warfighter, which focused on combat authenticity, was poorly reviewed and didn’t sell well during the holidays. Riccitiello said that the game industry faced “stronger than expected headwinds” during the holiday selling season. For all of 2012, EA believes the console game business grew mid-single-digits. 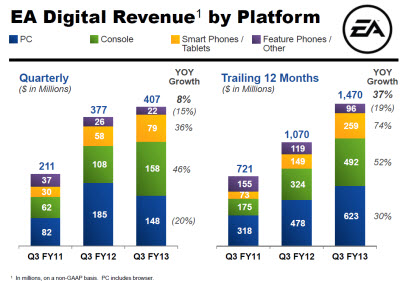 In a veiled reference to THQ’s bankruptcy sale, Riccitiello said, “The losers are getting hit hard.”

To deal with this, EA has been shifting more investment into “digital games,” such as social, mobile and online games that aren’t sold in retail stores. Digital sales for EA in the past 12 months were $1.5 billion, up 37 percent from a year earlier. That is about 39 percent of EA’s overall sales. Titles such as FIFA Soccer 13 have generated $233 million in digital sales and continue to generate revenues long after the initial game ships to stores.

The industry will face a tough transition to new game consoles soon. The Nintendo Wii U has sold 3 million units, but it isn’t selling like gangbusters.

And Riccitiello said that the start of the “true next generation” game hardware, which Riccitiello calls Gen 4, won’t begin until Nintendo’s rivals, Sony and Microsoft, ship their consoles. Beyond EA’s fourth-fiscal quarter ending March 31, EA sees the “light at the end of the tunnel.”

Digital games will smooth out the revenues until the new consoles come. But sales aren’t big enough yet to offset the gap. 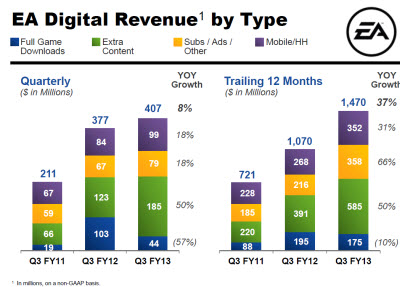 EA said its free-to-play revenue was $185 million, and mobile games (portable, smartphones, and tablets) accounted for $100 million in sales in the quarter. With 1 billion smartphones and 200 million tablets in use, EA believes this part of the market will continue to grow. Subscription, ad, and other digital revenue are growing too.

As for Nintendo, Riccitiello said, “You never count Nintendo out. They have some of the best intellectual property in the industry. When marquee titles arrive, that as when you see the bounce. I am deeply respectful of Nintendo.”

But he added, “I don’t see much correlation between Nintendo results on the Wii U and what we see coming. We see a pretty sharp distinction and are unfortunately unable to go further than that” in commenting on the next-generation consoles.

EA said it is working on a future Battlefield game, and it is safe to say that the title will be made for the next-generation machines. Frank Gibeau, the executive vice president of EA’s game studios, said the company is about to talk about that game in the next 90 days or so.

One analyst asked what would happen if the next-generation consoles didn’t produce the expected lift for the game business. Riccitiello said that the data on game usage and game revenue is “exceptionally clear.”

“We have added gamers to the universe each year in the last several years, and there is absolutely no sign that is going to slow down,” Riccitiello said. “That’s been driving substantial growth in digital.”

He said EA knows more about the roadmap coming and he said, “With the information we have, we remain bullish.” In the current fiscal year, EA is investing $80 million in the next-generation consoles.

As for Valve’s expected Steam Box Linux-based game console for the living room, Riccitiello said, “I am squarely in the Gabe Newell fan club,” a reference to Valve cofounder Gabe Newell. But he said Valve has not put information out about whether it will be able to compete with the consoles, which he said represented multiple billions of dollars of investment. He said that based on what Valve has said so far, it could be a “cool niche product that appeals to Gabe and his friends and people like me.” But Valve has not “put enough bread crumbs on the ground to tell” EA what path it is on.