Outside of "hardcore" PlayStation fanboys, it's probably safe to say that Arin Hanson, better known as Egoraptor, is the only reason anyone is watching Season 3 of The Tester.

In case you haven't heard the backstory, the famous Internet animator of the "Awesome Series" and "Sequelitis" unashamedly used his popularity to secure a spot on the show. If you play video games and have access to YouTube, you've probably seen some of his work. At least, that's exactly what Sony seems to be counting on. 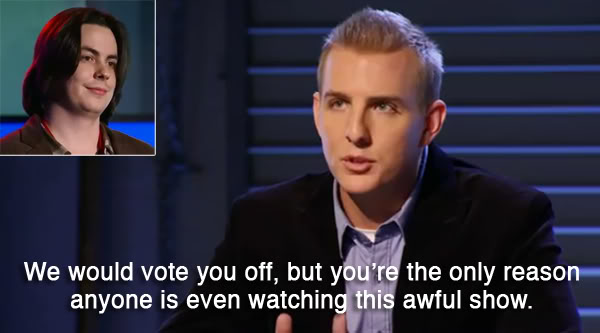 Not only is Egoraptor the clear favorite of the cast (every other competitor's video in The Tester's contestant bios has overwhelming negative votes), but he's also the only one who isn't a walking stereotype.

As usual, the cast is a terrible, horrifying representation of people who play video games: the hot goth chick, the annoying ethnic feminist, the fat perverted nerd, the "firery" redhead, and so on. It's a lot like those romantic comedies that carefully have a person of every possible race, just to make sure they have someone targeted at your demographic. And everyone loves goth chicks.

But here's where things get rich. The Tester's judging panel, a line of bland faces that I couldn't possibly remember by name, almost voted off Egoraptor for "using" the show to promote himself, rather than having an earnest, blind passion for the PlayStation brand.

In the end, Egoraptor was given a pass and remained in the competition because of his fans, showing that Internet popularity and a desperate need for viewers trumps the actual rules. And so the utter hypocrisy begins. Although Egoraptor's singled out for self-promoting himself, the producers are keeping him on because they need his Internet fans to watch the show.

It's so ironic (moronic?) that it hurts.

In fact, Sony's being so upfront about The Tester's hypocrisy, you can see it for yourself. Each video in The Tester's YouTube playlist is tagged with the "egoraptor" metadata label, including videos that neither show or reference him at all. It's pretty funny how the show's judges want to pretend to be mad that Egoraptor's not taking the competition seriously, but the video team is spamming their YouTube tags with his name.

Overall, the build-up and promotion of this season shows nothing but the desperation of The Tester's production team to get you to watch the show. After all, Egoraptor can't get voted off in the season too early, lest all his fans stop tuning in. Even when he is eventually voted off (and he clearly didn't win, if you read between the lines in his Reddit Q&A session), you can bet that those videos will still be trying to get clicks by tagging his name everywhere.

That's got to be a tough pill for Sony to swallow, given Egoraptor's stance on other PlayStation products. 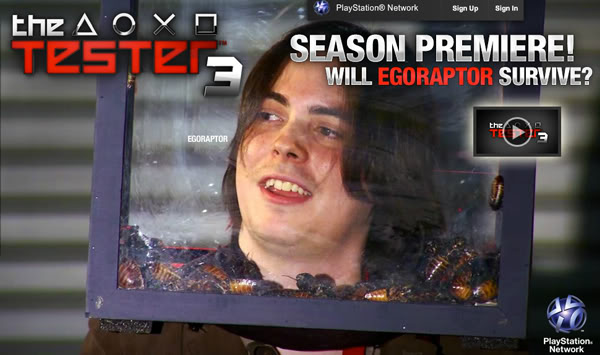 For fuck's sake, they're not even being coy about it.

[McKinley Noble is a former staff editor at GamePro and an MMA conspiracy theorist. Follow his Twitter account for crazy talk, 1990s movie references, and general weirdness. Or you could just stalk him on Google.]