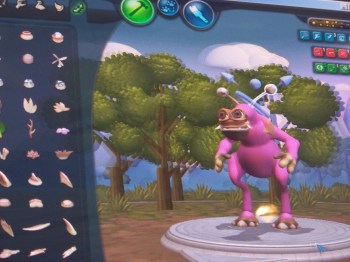 Electronic Arts will soon launch “Spore Creature Creator,” a download that lets fans create their own virtual identities for use in Spore, once the much-anticipated game launches in September.

In the download, you can fashion creatures from scratch then and share with your friends. The company showed it off to journalists on Tuesday night at EA’s Maxis game studio in Emeryville, Calif. I got a chance to create my own creature, shown in the video below, within a few short minutes. As with many of the other “Sim” games in the same kind of genre, the joy is in the building, not destroying.

Although we’ll see what the rest of Spore turns out to be — the game lets you start as a single cell organism and grow to rule galaxy-wide empires.

EA recognized the commercial value in the creativity tool itself. It’s a kind of a mini-game, with a free downloadable version and a premium version that costs $9.99. Both are available to the public on June 17. 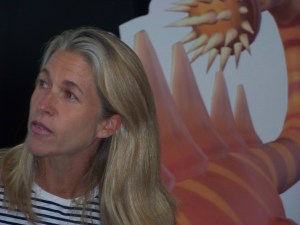 “Getting the Creature Creator out there before the launch of the game is an important part of getting consumers to understand what Spore is all about and getting their own creations to come to life,” says Lucy Bradshaw, executive producer of Spore.

The tool is aimed at whetting the consumer appetite for Spore, a unique video game that goes on sale on Sept. 7 on a variety of platforms, including the PC, the Mac, the iPhone, and the Nintendo DS. In the game, players can create single-cell animals, creatures, and shape the galaxy. It is the latest creation of game development genius Will Wright, whose “The Sims” has sold more than 100 million copies worldwide. Wright conceived of the game, but a large team led by Bradshaw is following through on his vision. Although it is a single-player game where players can create everything in an open world, Spore has a lot of unique features that take advantage of social media.

EA has been working on the game for more than five years and it is launching the game as a cross-media franchise right off the bat, selling everything from 3-D toy models of creatures to an iPhone Spore game. As such, it is probably the biggest bet in the video game industry. 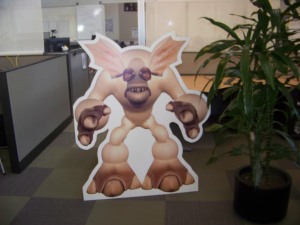 The early release of the Creature Creator will actually make EA’s job of developing the game much easier. That’s because users can upload their own creatures into a Sporepedia, which can be shared with every other player who buys the game. The players download those creatures into their own games. The game developers concentrate on creating tools and game mechanics, but they don’t have to use tons of their own artists to populate the world with their own creatures.

Those users’ creatures become the species that your own creature must compete against in a survival of the fittest evolutionary war. First you compete to beat out single-cell animals, then you build out a tribe or civilization, battle for control of a planet, and finally you try to control the galaxy. There is no limit to the types of creatures in the galaxy because players themselves can create an infinite number of creatures. At last, user-generated content has come to video games. 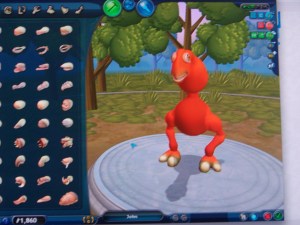 From within the Spore Creature Creator tool, you can create your creature using custom tools and templates for various body parts. You can give the creature its skin texture and paint it. To lengthen the creature’s body, you use the mouse to grab the backbone and stretch it. You can drag in body parts such as eyes, ears, noses, claws, feet, or, as I used, tail spikes.

You can put the creature into a test mode, where you can make it dance, make babies that carry the creature’s unique genetic signature, and get them to express emotions like happiness or sadness. Then you can email a snapshot of a creature to a friend from within the tool’s own email client. And you can also create a video, which you can immediately upload to your YouTube account. EA has established a partnership with YouTube for a Spore Channel. It has also created Spore.com, a community site where users can share their creatures, rate the best ones, and communicate with others about their Spore creations. Users will also be able to create their own Spore comic books based upon their own characters.

I had fun with my short time with the Spore Creature Creator. The tool itself was intuitive. I didn’t have to ask anyone how to use it. But I did mess up my creature. I didn’t realize the creature’s body parts face only one direction when you’re creating it. I started with a creature that was facing the wrong way. So when it came time to attach legs to it, they went on backwards. The creature’s face was on one side and the feet were facing the opposite direction. I asked if I could rotate the legs and the Maxis folks told me I couldn’t. So I may have found the one bug in the software.

Bradshaw said the 80-person development team is busy debugging the game now. That’s a smaller team compared to the 140-person team for “The Sims 2,” and that speaks to the fact that a lot of consumers are going to contribute to the game with their own user-generated content.

Here’s a link to my own Spore creation, the creature with legs facing the wrong way, on YouTube.
[youtube=http://www.youtube.com/watch?v=rhMUNXYV2iw&w=425&h=344]