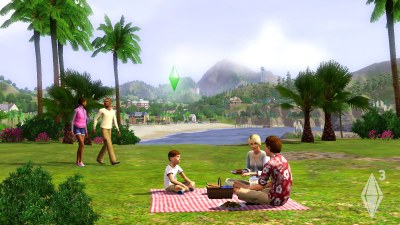 Electronic Arts posted a smaller loss than expected in part because it cut back on expenses much faster than it previously indicated.

A bellwether for the console game industry, EA is one of the largest video game publishers, and its attempt to turn its financial fortunes around is being closely watched. Critical to EA’s future is the June 2 launch of The Sims 3, the latest incarnation in a series of people simulators that have sold more than 100 million games. EA chief executive John Riccitiello said that EA is readying its largest-ever retail marketing campaign for the launch.

“It is one of the most important titles in the history of our company,” Riccitiello said.

For the fourth fiscal quarter ended March 31, the company reported a loss of $120 million (on a non-GAAP basis), or 37 cents a share, compared with a loss of $30 million, or 9 cents a share a year earlier. Analysts had expected a loss of 43 cents a share. Revenues were $609 million, down 51 percent from a year ago. Revenues did not meet analysts’ expectations of $633 million. Big titles in the March quarter were Skate 2, Rock Band 2, The Lord of the Rings: Conquest, Left 4 Dead and Need for Speed Undercover.

For fiscal 2009, EA reported non-GAAP revenue of $4.1 billion, up 2 percent from $4.0 billion a year earlier. The company lost $96 million, or 30 cents a share, on a non-GAAP basis, compared to net income of $339 million, or $1.06 a share, a year earlier. EA had 31 titles that sold more than 1 million copies in the year, compared with 27 a year earlier. But its costs were higher, and so it still lost money. EA said the cost reduction program that led it to cut roughly 10 percent of its workers and close five facilities is now complete.

Looking forward, EA reaffirmed previous guidance and said it expects to post revenues of $4.3 billion in the fiscal year ending March 31, 2010. It expects to swing to a non-GAAP profit of $1 a share. EA has 50 titles in the works, not including expansion packs, 20 of which are Wii titles.

For the Sims 3 launch, EA has some innovative marketing ideas. It will give every user the equivalent of $10 to spend on goods for their homes or characters in the Sims 3 online store. And it will let players download a new virtual town as soon as the game launches. The game itself lets players roam through a whole town, rather than just a single home.

Besides The Sims 3, EA has high expectations for games coming in the new fiscal year from BioWare, which is working on Mass Effect 2 and Dragon Age, as well as EA Sports Active and a game based on the upcoming film Harry Potter and the Half Blood Prince. Another big one is a Rock Band game coming this fall based on the music of The Beatles.

Other interesting details: Spore has sold more than 2 million copies. The Madden NFL and Need for Speed franchises sold more than 5 million copies each in fiscal 2009. And Pogo.com, a casual game web site, has 1.8 million paying subscribers, up 9 percent from a year ago, while the fantasy role-playing game Warhammer Online has 300,000 paying subscribers.

Riccitiello said he wasn’t concerned about slowing sales of the Wii in Japan, since the U.S. and European markets follow different patterns. He also wasn’t surprised that hardware sales were relatively weak in the U.S. in March, since there were no big price cuts or any other promo activities at that time. He said he was very encouraged at the success of the iPhone and said EA would do 30 titles for it in the coming year.

In China and Korea, Riccitiello said, EA looks forward to becoming profitable in the year ahead. It has launched online-only versions of its FIFA soccer game in China and NBA Street game in Korea.