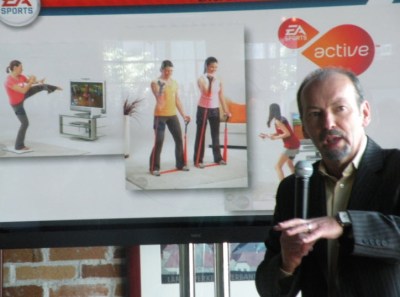 Electronic Arts showed off its latest sports games today, with a heavy emphasis on new kinds of games that could appeal to wider audiences.

The game has a deep fitness program for people who are serious about losing weight and staying trim. They can use its advice and tools to track their activities and design workouts that let them have fun while they exercise. You can do things like simulate rollerblading jumps by tying the Wii controller to your thigh and jumping up and down. You can use a stretch band to exercise your arms and see how precisely you’re following the instructions by looking at your on-screen avatar. The game isn’t as cutesy as Wii Fit, so it may appeal to people who thought the Nintendo game was a tad silly.

Jen Riley, an EA spokeswoman pictured at bottom, demonstrated how you can use the Wii controller with the game to shoot baskets, do bicep curls, flex your legs, or box. You can design a workout so it becomes progressively more difficult every day. You can tailor it to focus on cardio, the upper body, lower body, or sports activities. The game keeps track of your progress and awards you trophies for achievements. It also lets you enter physical activities that you’ve done outside the game. The title officially launches on the Wii on May 19.

“This is about transforming the business and innovating,” said Peter Moore, head of EA Sports. 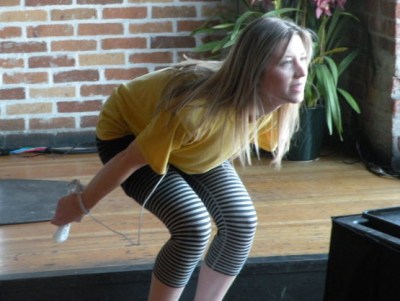 EA needs to evolve — after all, it’s losing money despite the EA Sports cash cow. The company has been trying to come up with original hits, but some have flopped, and EA’s game development costs have been rising faster than its revenues. As a result, EA has been cutting back on staff and even canceling games.

Moore pointed out that EA’s traditional console sports games are now garnering big online audiences. The FIFA soccer and Madden football games generate as many as two million game sessions per day online. The equivalent of 150 full NFL seasons are played on Madden in just one 24-hour period. EA is also adding a lot of digital-only content that can be downloaded to game systems. One example is the NCAA Basketball 09 March Madness title, which can be downloaded to an Xbox 360 for the equivalent of $15. That game will be updated with some of the latest developments in the ongoing tournament.

But the sports world is changing rapidly. Free-to-play, short session games are being offered (or launched soon) by rival startups like CyberSports, GamesCampus, Six Degrees and Quick Hit. The web, iPhone, the Wii and other new platforms are becoming increasingly attractive. EA has experimented with all of them as it tries to hang on to its fans and create new ones, Moore told me. 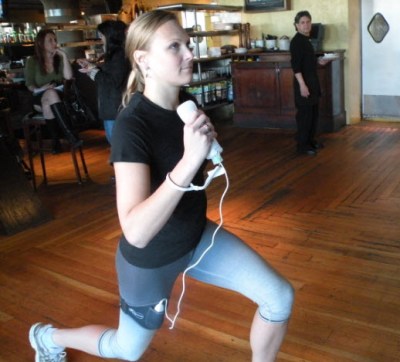 EA’s mobile game division showed off a version of its Tiger Woods PGA Tour game for the iPhone. The game will debut in the coming months with seven 18-hole golf courses, five pro golfers, and customizable avatars (so you can make the player look like you). You play the game by flicking your finger across the touch screen to swing at a golf ball. Over the next nine months, EA plans to roll out a bunch of iPhone games.