Elgato Gaming has updated one of the most interesting and useful new tools in the world of livestreaming. Its Stream Deck USB command center, which enables broadcasters to control Twitch and other live content using 15 LCD buttons, now supports the XSplit Broadcaster software. SplitmediaLabs’ XSplit is a popular piece of video-production software that can composite videos and feed them into livestreaming sites. This matters because it makes it easier for one person to run a professional-looking broadcast, and that could begin to shift what people expect when they go to a site like Twitch for videos.

“Iterating based on community feedback is a big part of our process at Elgato, and XSplit integration has been one of the most popular requests for Stream Deck,” Elgato Gaming general manager Julian Fest said. “This software update brings the effortless Stream Deck experience to XSplit, making switching scenes, launching media, and interacting with the audience easier than ever.” 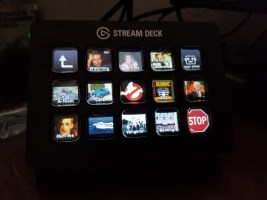 Above: You have to have the “Ghostbusters” theme song cued up at all times.

The Stream Deck debuted in May, and it included support for the open-source Xsplit competitor OBS Studio out of the box. The device has 15 programmable buttons that you can set to activate hot keys, jump between various scenes in OBS or XSplit, or do just about anything else (if you’re willing to do the tweaking in the Stream Deck software).

You can even customize the LCD displays so that you instantly know what each button does. For example, I have one of the folders of myStream Deck set up as a jukebox for playing songs during my livestreams. You can have Stream Deck preprogrammed to perform as many as 210 operations at any one time.

Elgato promised XSplit support since originally rolling out Stream Deck, and it’s nice to finally have this functionality. I prefer using Xsplit over OBS, so I’m excited to experiment with my setup.

In preparing this update, Elgato worked closely with SplitmediaLabs on ensuring the device functions properly and has full support of the XSplit software.

“We’re always looking for strong partnerships that help us further support content creators, and joining the Stream Deck ecosystem was an easy decision,” SplitmediaLabs chief marketing officer John Howe-Marshall said. “Stream Deck empowers content creators to take control of their livestreams and makes it easy for them to produce high-quality content, and this integration gives our XSplit family the opportunity to access this technology and elevate their production value.”

I don’t know if my production values are going to get any better now, but crazier things have happened.