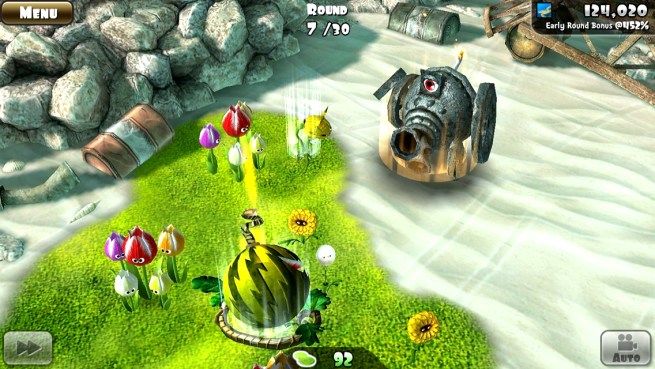 Inis is now out promoting its next title, Eden to Green, for mobile devices. Surprisingly, it isn’t a rhythm game and has little to do with music. Unsurprisingly, I can’t wait to get my hands on the final release.

Eden to Green, out now in Canada for iOS and Android (and launching globally soon), takes place on a planet full of sentient plants, fruits, and vegetables. These organisms are under siege by an army of unnatural, mechanized enemies. It’s the players job to sow seeds and spread the plants’ area of control and defeat the machines.

The point is to cover the play area, and eventually the entire world, with green grass. Unlike other tower-style games, the computer-controlled opponent won’t continuously send waves of enemies. Eden to Green is a turn-based title with a focus on unit-placement and tactics.

Gamers will gain access to various plants that can attack and defend in different kinds of ways. Better plants cost more resources. 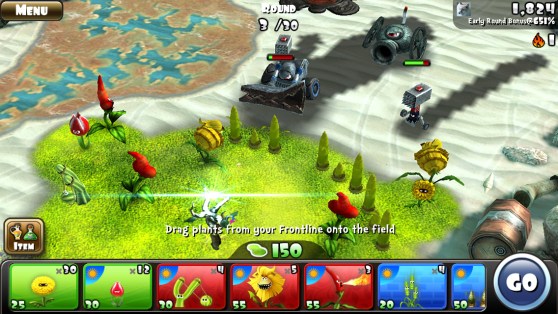 “You want to spread the green — not just to restore the beauty — but that’s what gives you the energy to plant more and better plants,” said Yano. “And with a turn-based system we can give the casual player a chance to think about their move and what they want to do and how they want to plan it.”

The strategy game is colorful and beautiful for a mobile release. Inis implemented the Unreal graphics engine to power the visuals. It shows in the crisp character models and dynamic lighting. Eden to Green looks a lot like Pikmin by way of Pixar. The plants are happy and goofy, while the enemy machines are angry and ugly.

Finally, Inis is working with Zynga through the social-game company’s third-party publishing platform. Zynga plans to heavily promote Eden to Green in its other titles, so Inis worked to ensure the game appeals to a wide variety of gamers.

Yano said his team is targeting a midcore audience, but it’s the type of game that I could see swallowing up tons of hardcore players on one end and a lot of Plants vs. Zombies fans on the other.