“Running things. It ain’t all gravy.” That’s a line from one of my favorite gangster films, Miller’s Crossing. But running things is what you’ll learn if you play Empire of Sin from developer Romero Games and publisher Paradox Interactive.

In no time at all, I learned how to attack a thug’s hideout, open a speakeasy, supply it with liquor from a brewery, and manage a brothel. You too can learn how to build a criminal empire if you play this strategy game.

OK, let’s not tell the kids that.

But pssssst: Empire of Sin comes out on December 1 on Steam on the PC, PlayStation 4, Xbox, Nintendo Switch, and the Paradox Store. It’s the brainchild of Brenda Romero (see our interview with the noted game designer), who dreamed about making a mobster game for decades.

Empire of Sin is a single-player strategy game that runs in real time while you take over up to 10 neighborhoods in Chicago. Every 12 seconds of real time represents about a day in the game. But when you attack a rival gang’s operation, it moves into turn-based combat, much like the XCOM series. Your squad takes on an enemy team, and you try to outmaneuver them with superior tactics.

The bodies conveniently disappear when it’s over. 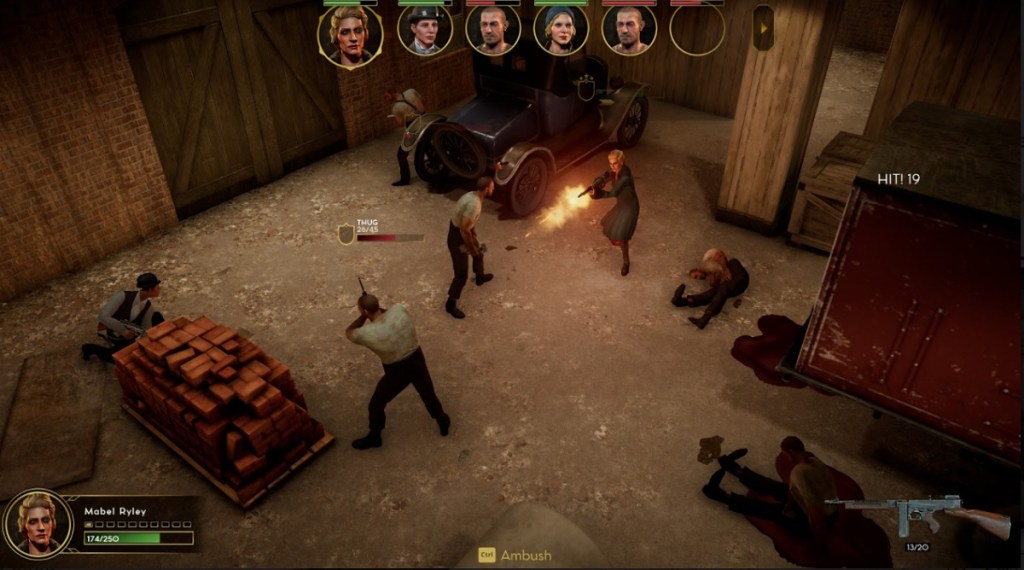 Above: Combat in Empire of Sin

I played the game via Parsec during a press event with the developers at Romero Games, and then I returned for a second private session. The graphics look good, with a fair amount of cinematics. The characters look good, and the environments are beautiful, with awesome details from the 1920s such as the sound of cars from the era.

But the mouths of the characters don’t move, and that removes a bit of the realism. (I’m told lip-syncing will be available by publication time). You can either listen to the dialogue or read the chat. You can change your point of view. You can draw a circle around a group of characters and click at another part of the map to make them move there. The world clock ticks away as you do this on the streets of the city. 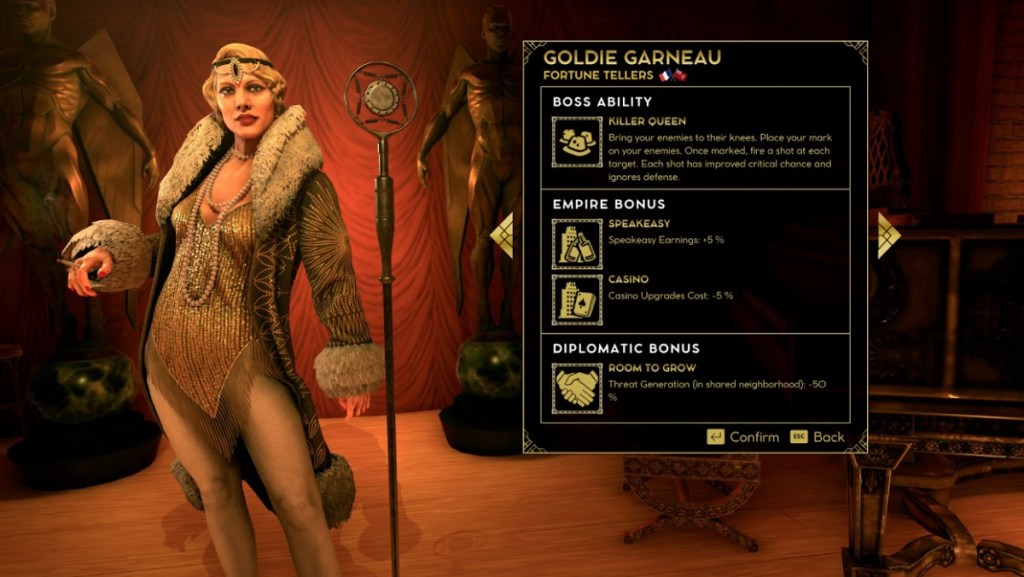 Above: Goldie Garneau is one of the mob bosses in Empire of Sin.

In my first demo, I played as Goldie Garneau, who leads a gang on the South Side called the Fortune Tellers. I started out owning two breweries, six speakeasies, two casinos, and a brothel. You can also build hotels, blending legit and illicit businesses.

Goldie has a sniper rifle that matches her “Killer Queen” ability, which means she’s a sharpshooter who can mark several targets at a time and release a flurry of shots at them. Her speakeasies are 25% less likely to be raided by the police, and she gains 20% income from protection rackets. Since she’s charming, she gets 10% gains on trades with other factions.

Goldie is of French descent and has a couple of hired guns, including assassin Maria Rodriguez. When you click on Maria in the gallery of thugs, you can see that she hates some gangsters and loves others. These relationships matter as you hire different gangsters to run operations. You don’t want to put two gangsters who hate each other on the same team. This reminded me of the Nemesis system for the Orcs in Shadow of Mordor. There are 60 different gangsters to choose from. 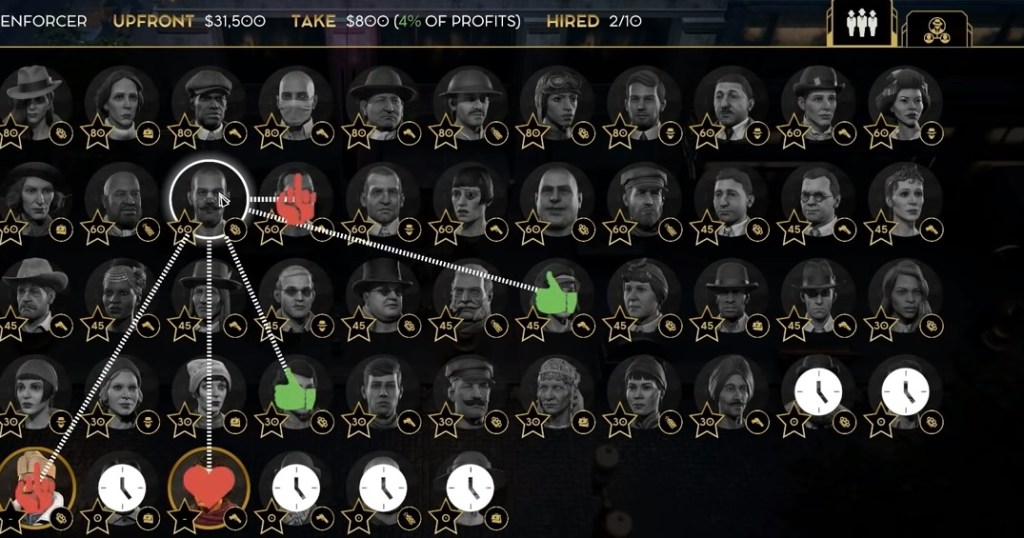 Above: The web of relationships among gangsters in Empire of Sin.

As a hired gun, Maria can fire a burst with a machine gun and sweep a room with bullets. Gibby Willard is a Demolitionist with expertise in explosives, and Patrick “Pebble” Grady is an enforcer who draws fire and protects the crew. When I lost Gibby, I hired Claude Bernard as a replacement.

One of the first things I did was attack a derelict building where some thugs were squatting. There were three of them in there, and I had a squad of three. We were randomly dropped into the building near one side of the building, and the squatters occupied the other side. Turn by turn, we made our moves. My characters could fire, move, reload, hide, or stay on over-watch. With the latter, you wait for an enemy to come into your field of view, and then you automatically fire.

My crew made quick work of the thugs. It took three or four bullets to bring down each one, but not every shot hit the mark, especially if the target was hiding behind cover. Once we defeated them, the building was ours. But we had to pay some money to convert it into a brewery, brothel, speakeasy, or casino.

I didn’t realize at the time that I could also spend money upgrading the joint so that it had guards or other improvements. But luckily, no one attacked my racket. I had a good chunk of money — around $10,000 — and I built a speakeasy. Then I attacked more and more places until I occupied most of the buildings in my neighborhood. But that cost me all my cash, and that wasn’t good when I lost one of my hired guns. I didn’t have enough money to hire a replacement, so I had to sit around until the cash came back.

Meanwhile, my rivals were gaining ground on me. I received a couple of offers for alliances and agreed. They were quickly broken. I got offers for a sit-down meeting with another mob boss. But I couldn’t find where to go on the map, so I skipped the sit-down. That was about as far as I got. I learned later on that I had to make sure I had enough breweries to supply enough alcohol to all the businesses. 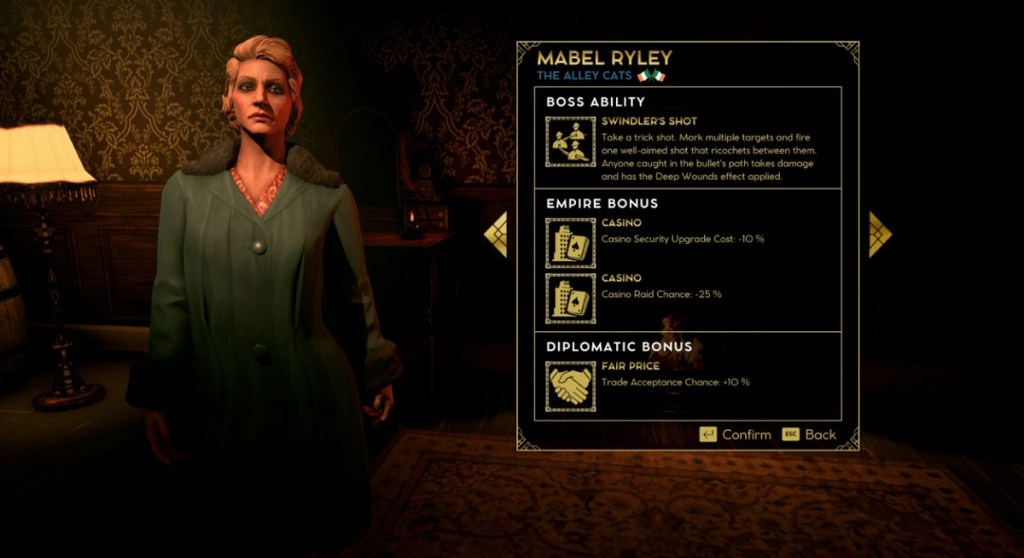 Above: Mabel Ryley is a mobster in Empire of Sin.

Ryley’s gang was the Alley Cats. An Irish immigrant, she was married to a mobster who got killed. Now she has taken over the Alley Cats and plans on expanding her dead husband’s rackets. Just about every mobster she meets offers condolences about her husband, and you can choose Ryley’s reaction as either annoyed or kind.

Ryley stays calm in combat, so she gets a bonus. I had a couple of hired guns and started taking over some derelict buildings. I did that a couple of times successfully, but then I ran out of money. So the next time, I smashed up the place and collected the loot that came from that.

Ryley has a trick shot that can ricochet off objects. Anyone who is in the path gets a deep wound. Ryley doesn’t have to pay as much for casino security, and there’s a 25% lower chance of her casinos being raided. As you look at your options for upgrades, you can hire more security, deflect the cops with bribes, build up the ambiance of the place, and spread the word about it via word of mouth.

Since I had already played with Goldie Garneau, I was a little smarter about using Ryley and making sure her joints had enough alcohol. Ryley had a “swindler’s shot,” which let her target multiple enemies at once and use ricochets. Each one of my gangsters had some kind of special gift that could give them an edge in combat or other affairs.

But I had a bit of bad luck raiding a derelict building. The enemies killed one of my crew. Then the other one panicked and had to flee. So I had to back out of the battle, as it came down to one against four.

It was easy to get obsessed with the combat, as it was fun. But managing your empire is more important, and making sure you have strong rackets that yield a lot of money and are protected from both the police and other gangs is important. You can hire as many as 16 gangsters.

Above: A showdown in Empire of Sin.

I enjoyed my time with Garneau and Ryley. But I was just scratching the surface. There are 14 bosses in the game, from the real Al Capone to fictional capos like Maggie Dyer. They all start at the bottom in their rags-to-riches stories. You have to protect your boss because it’s all over if they die. Yep, the game has Permadeath. I felt the voices were well done, as well as the ambient sounds, as they made me feel like I was in another era.

It’s good to see this different kind of crime management game come along on the PC, where the graphics and mechanics can be awesome and deep. I’m not sure how fast the game is going to move when I get to play it for real on the PC. But I noticed some latency in my demos on Parsec, a streaming platform. The game reportedly won’t have that latency when it ships. Hopefully, it runs better when it ships, and I hope it does well. I wouldn’t want to say anything bad about it now because the mob will come after me. I could get into this gangster’s life. But it ain’t all gravy.