The key objective of these operating metrics is to help managers understand the fundamental health of the games and their future outlook, and to help make business decisions.

But do these metrics truly help?

If you are a hedge fund manager, focused on going long on companies that would deliver favorable financial results next quarter and going short on the companies that won’t, by all means you should be focused on DAU, ARPDAU, ARPPU, and conversion metrics.

However, if you are running business for the long term and focused on building a sustainable game that delivers fun and value to your players, I believe that overly focusing on these metrics hurts more than helps.

I believe that it is time to rethink operating metrics for games.

The problems with existing operating metrics

Game companies are under close scrutiny by investors for their quarterly performance, putting them under immense pressure to deliver strong financial performance. The unintended consequence of this pressure to deliver financial performance is that game teams can over index on generating revenue instead of delivering a better experience for players. For example, to meet short-term financial goals, the general manager of a game could turn up the monetization dials raise and thus grow revenue in a given quarter. However, not only would this revenue growth be short lived, but more important, it would also come at the cost of cannibalizing future quarters’ revenue. Worse, if repeated often, regular turning up of monetization dials could destabilize the in-game economy and cause the eventual implosion of the game.

Companies need metrics that can help them identify such patterns that could have impact on long term sustainability of their games.

Most game companies generally have robust revenue models that take into account historical trends on DAU, ARPDAU, and user retention; user acquisition forecast from the marketing team; content update plan and resulting impact on ARPDAU; user retention from game teams. These revenue models can be pretty accurate for established games over the short term as long as things go according to plan, which is not always the case – especially after major events like content updates or launches of new versions.

Businesses have to come to terms with how DAU, ARPDAU, and ARPPU are the lagging indicators and often times, these will fail to forewarn managers of impending revenue decline. Managing business with these metrics is akin to driving while looking into rearview mirror.

Game developers need operating metrics that are the leading indicators of the business and help them make decision based on future potential of the games vs. historical performance of the games. Companies need an early warning system that could help them identify such revenue drops in advance so that they can take timely actions and also set right expectations with various stakeholders.

Existing metrics don’t measure & reward what is fun for players

First, while most game companies embrace the idea of building games that players will love to play, the existing operating metrics don’t include any metric to measure players’ love, fun, or satisfaction. And game-development teams operate to yield results on metrics they are measured against, which, at times, could be at odds with the company’s value of delivering fun to players.

Second, free-to-play games don’t come with a price sticker, and players’ spending in the game is completely voluntary. Game developers can turn monetization dials, increasing (or decreasing) squeeze in the game in order to encourage players to spend more (or less). Game developers need to know the right level of monetization for its games. Are they leaving money on the table, or are they overcharging players? They need to measure entertainment value of games for players to help them decide the optimum level of monetization.

Companies need a metric to measure players’ fun and make that a part of the measure for their teams. They need their teams to not just deliver on DAU, ARPDAU, and revenue performance but also deliver on players’ satisfaction.

Engagement as the measure of fun

I believe that the best measure of players’ love is their engagement – spending time in the game, taking turns to play, completing sessions, sharing with and inviting their friends to play –  reflects on their satisfaction with the game. The simplest and most effective measure of engagement is the number of game sessions played and the average session length. Simply stated, the amount of time a player spends within a game could be the best measure of her engagement and thus satisfaction.

Engagement also the key for monetization

I believe that the more a player (and her friends) plays a game, the more money she will be willing to spend on it. Analysis of several publicly listed free-to-play game companies in China* reveals that revenue per user hour for all these companies in almost all quarters, ranged between RMB 0.35-0.45/hour, suggesting that players eventually pay for engagement (*analysis during the period when these companies disclosed a broad array of operating metrics; most companies have since stopped disclosing those metrics). Although the games are free-to-play, knowingly or unknowingly, players want to spend a fixed dollar amount per hour of entertainment.

Below are two charts comparing average revenue per paying user and average revenue per hour for three of the largest public listed free-to-play game developers – Perfect World and Giant published hardcore games; and Tencent published mostly advanced casual games. While Perfect World’s per paying user monetization was almost four times of that for Tencent and that for Giant’s was at two times, revenue per hour for all the companies was within the range of RMB 0.35-0.45/hour. 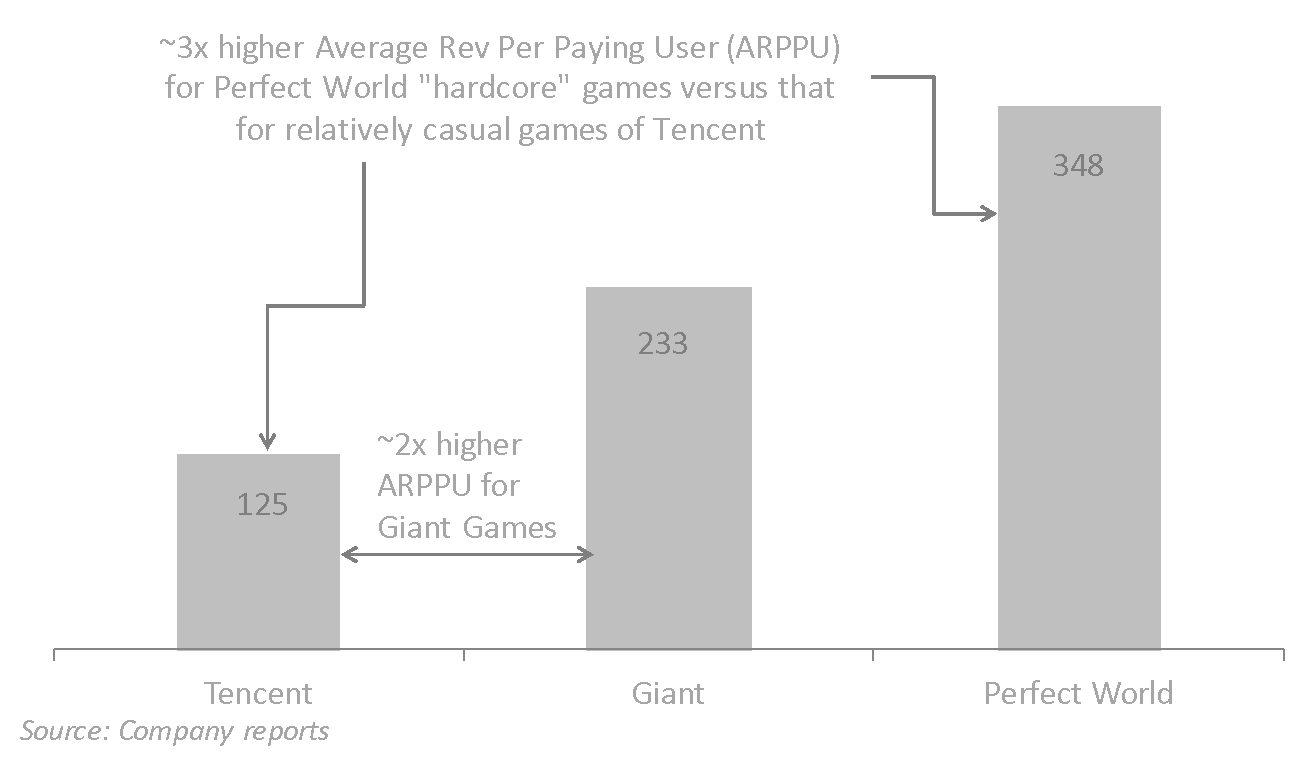 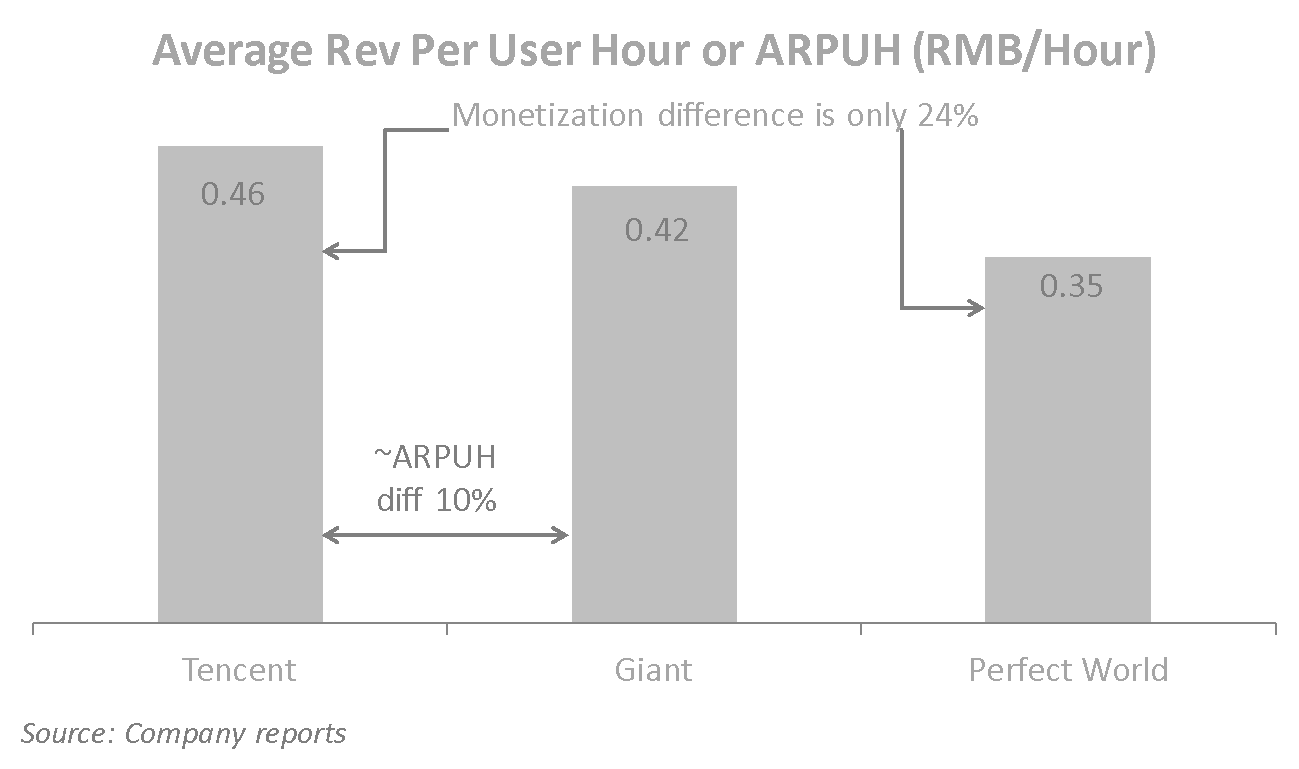 Given that players are willing to pay the same dollar amount per hour of game play (effectively setting the equilibrium price of entertainment per hour), game companies can grow revenue per user only by growing engagement. If a game developer tries to arbitrarily raise the price increasing squeeze in the game to extract more dollars from player, player engagement would decline. Conversely, lowering price by reducing squeeze would result in higher player engagement. 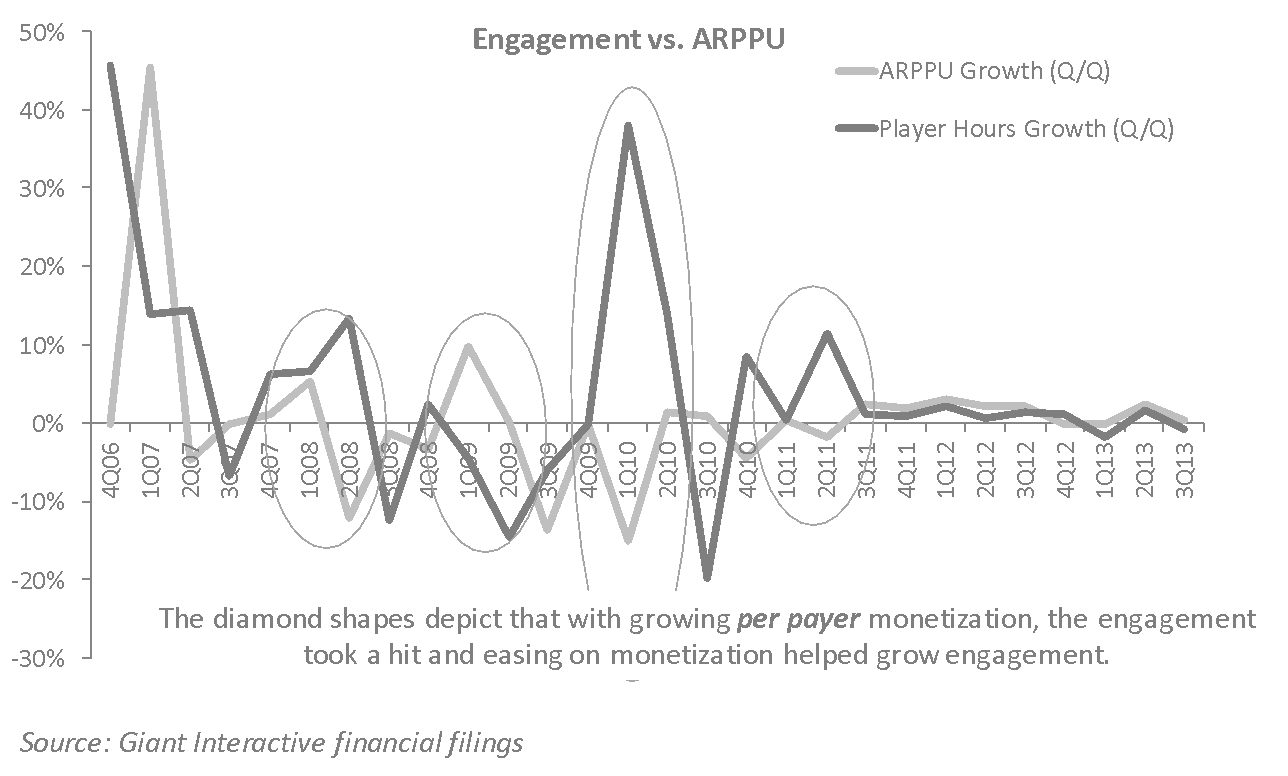 An analysis of game companies’ historical performance validates the hypothesis that engagement and per-payer monetization negatively correlated with each other.

The diamond shapes in the graph below depict that whenever the company tried to raise per paying user monetization, the engagement took a hit and easing on monetization helped them with higher engagement.

More important, monetization spikes were followed by sharp drops in total revenue, which leads me to believe that raising squeeze on players not only results in reduced engagement (as shown above) but also higher player churn, with revenue cannibalization occurring in future quarters. 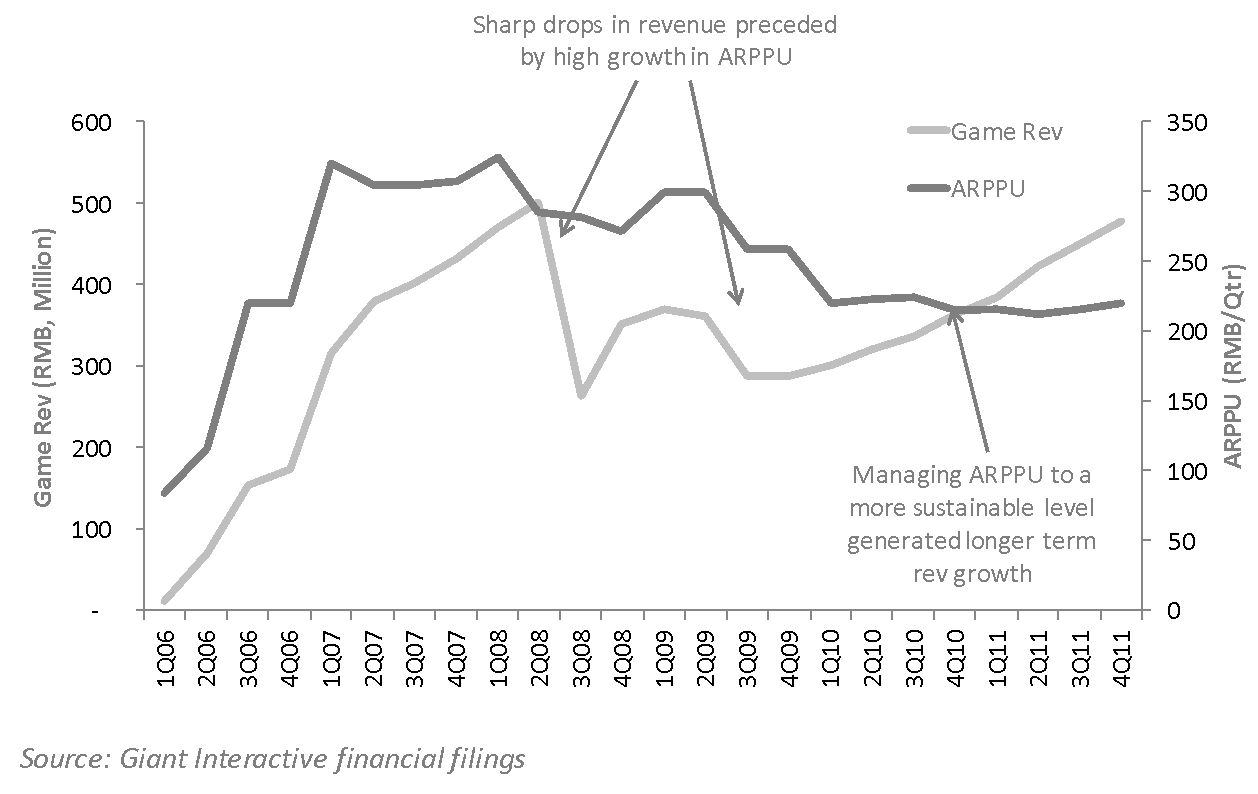 The analysis validates my views that (a) engagement is the best measure for players’ satisfaction; (b) players are willing to pay a fixed dollar per hour of entertainment; and (c) driving short term revenue growth by dialing up monetization would lead to decline in engagement and consequently revenue loss in medium term.

The engagement metrics should be the key part of the business discussions and review process within the game companies. Games should be measured not just on revenue, DAU, but also on player engagement. In the end, I believe that these changes could help bring the game developers closer to their core values of delivering fun for players.

Atul Bagga was most recently the CFO  for Zynga Asia and was an equity research analyst covering digital media and Internet with Lazard Capital and ThinkEquity.