Engineers have rebuilt D-Day relics in virtual reality using blueprints for the devices that were used the storming of Normandy seventy years ago.

History buffs will be able to view these 3D animated visuals with the Oculus Rift virtual reality goggles. D-Day veterans have seen it and been amazed by it, and Nova (a science show on PBS) has included the animations in a documentary, D-Day: Sunken Secrets. This debuts later this week in advance of the seventieth anniversary of the invasion of Western Europe by the Allies on June 6, 1944, at the turning point of World War II.

The animations of the Higgins landing craft, the Waco airborne troop gliders, and the Mulberry Harbor artificial port have been painstakingly recreated based blueprints that were carefully preserved over the decades, as the original vehicles are no longer around. They show that digital animation technology can be used to educate and preserve history in addition to entertaining our youngsters.

The idea for the project started more than a year ago when an employee of Dassault Systèmes was touring the Normandy beaches with his family. He couldn’t fully explain what D-Day, when thousands of soldiers died storming the German-held beaches, was like. So he came back and talked about it with Mehdi Tayoubi.

Tayoubi is an experiential strategy vice president for Dassault, which makes the 3D simulation software used to design products like Boeing airplanes. He is also the director of the Passion for Innovation Institute, which has been creating 3D animation re-creations of historical places like the Pyramids of Giza. That project with Harvard University shows people what it’s like to be amid the ancient wonders in Egypt. 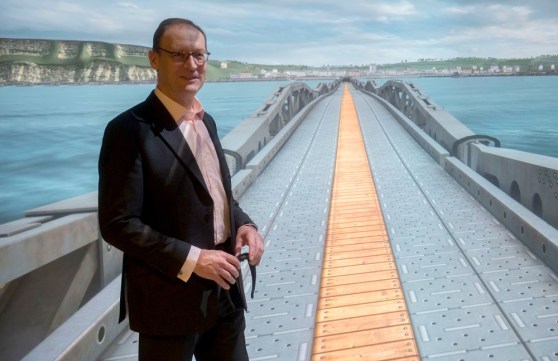 Above: Tim Beckett stands before a re-creation of the Mulberry Harbor his father helped create.

Tayoubi and the engineer agreed that they should try to re-create some of the historical engineering marvels that were built under the duress of a World War.

“There was nothing left for them to see on the beaches,” Tayoubi said. “He said that, as engineers, we should do a tribute to the engineers of that era who made these huge innovations.”

While plenty of video games have remade the experience of fighting on the beaches, the engineers wanted this work to be educational. They used the Dassault’s CATIA design software to remake the objects.

The Mulberry Harbor is a virtual walkthrough of an accurate re-creation of the massive harbor that the allies created to bring supplies into the beaches. The team built the walkthrough with the help of Tim Beckett, the son of Major Allen Beckett, an engineer who helped make the harbor, which has long been lost under the waters of Normandy.

The harbor was one of many innovations that helped the Allies win the war against Hitler’s forces. The Waco Glider was used by the 101st Airborne and 82nd Airborne divisions to land at night behind the enemy lines to clear the way for the invasion forces on the beaches. In the simulation, you can pilot an authentically re-created glider and see what the harbor and beaches looked like in 1944.

Meanwhile, the Higgins Boats, or LCVP, were used to carry troops ashore from the ships. Those remaining boats are also in a state of disrepair now, so the team had to reconstruct them for the benefit of future generations.

Rebuilding wasn’t easy. It took a team of 30 engineers and developers. 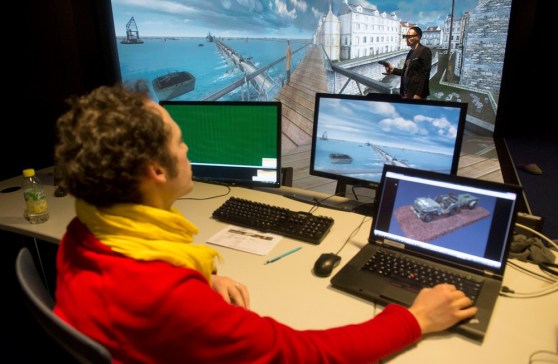 Above: D-Day in VR

“We began to lose this memory,” he said. “The blueprints were hard to find. We worked with the team that was scanning the objects underwater. All of this was disappearing too. We wanted to do the iconic things. But the blueprints for the Waco were not well scanned. They had no measurements. We had to send people to the Smithsonian to find better blueprints. It was archaeological work.”

You can view the re-creations through a typical computer screen, an Oculus Rift virtual reality headset, or a fully immersive virtual reality “cave.” Tayoubi said he believes that somebody could actually build a real vehicle based on the simulations.

Tayoubi likes the Rift in particular because it can inexpensively re-create what people can see in kiosks at museums or in expensive virtual caves.

It was an emotional experience to see veterans playing with the VR creations at PBS at an event last week, Tayoubi said.

“They were happy to see a younger generation preserving the memory,” he said. “We felt like that we were free to do this because they helped make the world free.”

“Virtual reality is good for gaming, but it is also so much more than gaming,” Tayoubi said. “It is great to see the startups coming out with affordable VR devices.”

The Passion for Innovation Institute, which has been around since 2007, is committed to making more historical re-creations of D-Day over the long term. Tayoubi hopes more will be ready by the 75th anniversary.

“We are dedicated to innovation,” Tayoubi said. “We want to create a digital memory. As engineers, we want to keep this memory. The engineers transform dreams into reality. This was a nightmare period for the veterans, and they had to innovate during the middle of it. It is a reminder that we need to be humble.” 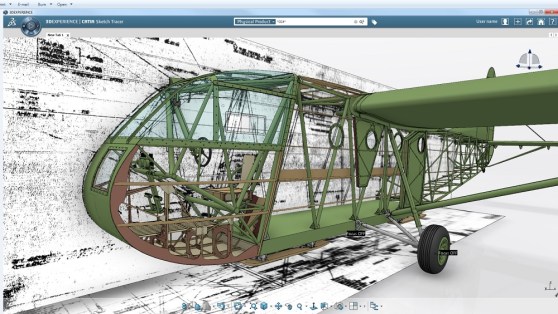