You can’t have too many guns.

That’s the thinking of Dodge Roll Games, the makers of upcoming PS4 and PC title Enter the Gungeon. And that’s not a typo — this mixes classic dungeon-crawling with gunfighting, so the name fits it. Think The Legend of Zelda, top-down view and all, but with bullets for enemies and guns for weapons. Lots of guns — we’re talking 200 or more kinds so far, and its creators are still adding more.

I got my hands on an early version at a preview event at the PlayStation headquarters this week. Dodge Roll gives nods to adventure games like Spelunky, dungeon explorers like the older Zelda games, punishing modern games like Dark Souls and Bloodborne, and even bullet-hell shooters from Japan. And it’s easy to find these inspirations in this relatively simple game, from its hand-drawn dungeons to its cruel roguelike play elements. It’s a radial shooter (one thumb stick controls movement while the other aims) set in procedurally generated dungeons, where the goal is survival, and you’re armed with any number of the game’s crazy guns.

I don’t have great aim, but after a five-minute tutorial, I was blowing away enemies that looked like shotgun shells with faces and feet. I learned to strafe around and use cover to hide from the insane radial bullet patterns, which look to have been pulled from Japanese shoot-’em-up hits like Ikaruga. Players are able to flip over tables to use them as cover, but remaining mobile is the best strategy for this hectic, challenging game.

The name of the studio points to one of the game’s most important techniques: dodge rolling. Just like in From Software’s hit Souls series, including Bloodborne, survival in Enter the Gungeon requires mastery of this diving roll. The first half of the dive makes players invincible to bullets, while the second half leaves them vulnerable. So it becomes a game of diving, dodging, and firing back. It wasn’t long before I was able to hone in on firing accuracy and fight back. But an oversized, muscle-bound bird with automatic machine guns took me out before I could do any damage.

Even the story has a gun theme. Each of the four playable heroes has something in their past that they would like to fix, with a story of their own attached to that. Working through this impossible dungeon will have them uncovering a gun that can erase the past itself. 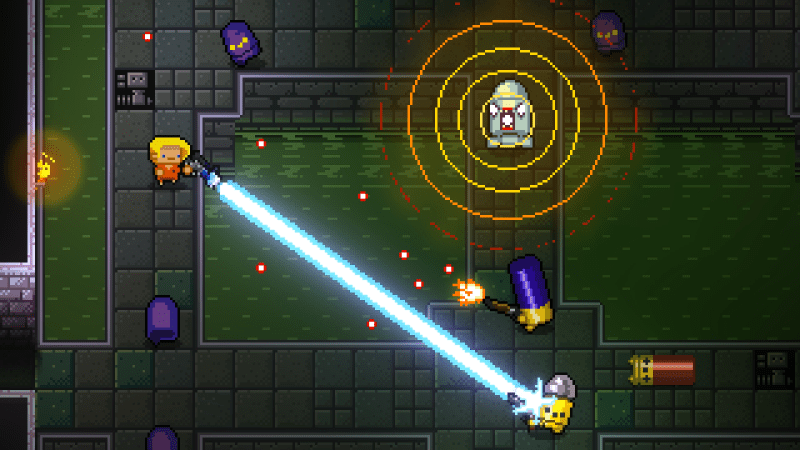 Above: This beam gun is much easier to kill with.

Dodge Roll is made up of former Electronic Arts employees. Just after EA’s Mythic studio (Ultima Online) was shut down, Dodge Roll cofounder Dave Crooks scrambled to put together a prototype for Gungeon in about a month’s time, building it with only one funding source: his savings. Dave and his team pitched indie-friendly publisher Devolver Digital last year, and now the game is rounding the corner to the Alpha stage, shooting for a release near the end of the year.

The team couldn’t decide on a name at that time. It played with some really odd ones before, including Goat People, Ghost Lord, and The Brave Companions. But it eventually settled on Dodge Roll as none of the team had any objection to it, unlike the others. It worked out as it ties to the team’s first game.

The gun selection is the star of Enter the Gungeon. Every enemy killed earns money that you can use in the item shop to buy new guns, and as it progresses, better guns open up. While standard pistols and rifles show early on, they pale next to laser and cannonball guns. And even these look stale compared to unicorn horn guns that fire rainbows or alien ant faces that barf poison slime. How about a demon arm that shoots beams out its mouth? Or a mailbox that shoots envelopes? Or a barrel that fires fish?

Dodge Roll seemed to try to fit in anything they could think of as inspiration for a new gun. Crooks told GamesBeat that the Needle Gun (not to be confused with the Syringe Gun) was inspired by a needle-shooting enemy from the Final Fantasy games named Cactuar. But that’s not the only Final Fantasy inspiration: Final Fantasy VII’s gun-armed hero Barrett gets a tribute with one of the arm-worn weapons. But Mega Man gets an arm-hand too, as does Metroid’s Samus.

Before I left, I had the pleasure of playing in a gun test mode demo room where I could freely flip through the bulk of the current gun selection (about 150) to try each out. Being able to try out each gun’s firing and ammunition traits was just as fun as the dungeon-crawling.

“We might be one of the most referential games of all time,” said Crooks. “Because we’re ex-EA, this was sort of a cathartic game for us. We wanted to be able to put anything we wanted in so we have all kinds of references from games we love.”