As of today, anyone will be able to get access to Unreal Engine 4 for a $19 per month subscription fee and a revenue-sharing agreement that grants Epic Games 5 percent of all revenues. The royalty terms apply to gross revenue from users from all aspects of the game, which includes the sale price, microtransaction revenue, and developer revenue from advertising. This makes one of the slickest development suites for games now an affordable option for indie studios, and it could lead to better looking and more ambitious games from smaller developers.

Epic Games founder Tim Sweeney made the announcement at a morning press conference at the 2014 Game Developers Conference. “That’s a bold new step for Epic, but we think it’s an appropriate one given the new style of the game industry,” Sweeney said. “It’s now grown into a very open and democratic form, where absolutely anybody can go out, develop a game, and ship it.”

The engine will be available for download today on GitHub. Epic is also opening a new set of forums for Unreal Engine questions, a Q&A site on AnswerHub.

The traditional licensing model for the Unreal Engine hadn’t grown to the size Epic had hoped, so the development house has taken steps to reverse the usual, extreme secrecy that surrounds the work of triple-A developers. Not only is it making the Unreal 4 Engine, which supports PC, Mac, iOS and Android platforms, available to everyone through the new economic model, it is also releasing the complete C++ source code for the engine to anyone who pays for the subscription.

Epic supports the Unreal Engine 4 for Xbox One and PlayStation 4, but this new access policy does not cover console projects. “We can’t provide the console source to the general public under these terms because of various NDAs and agreements in place,” said Sweeney. “It is available under a negotiated license.”

Subscribers will also see the code changes that Epic makes as they improve the engine. “It’s going to be a very open and collaborative environment, not the sort of secretive, elite approach that we’ve taken in the past. 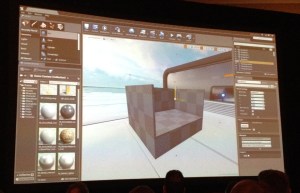 Above: The Unreal Engine 4 editor in action.

The engine will include sample games, like a shooter and a tower defense game, for studios to use to jump in and learn tools like the Blueprint system, which enables developers to run objects in real time, in the engine, while tracking the programming graph for objects, or A.I. behaviors, and to make quick changes on the fly.

The success of Epic Games is now tied more than ever to the success of the developers who use the Unreal Engine. “It reminds me of the shareware days back in 1991 when you released one episode of a game for free, and then asked people to send in a check, and then I’d mail out a 3.5-inch floppy drive disk with the other episodes of the game,” said Sweeney.