Epic Games has created a $5 million fund to provide financial grants to developers who are creating games and other innovative projects. 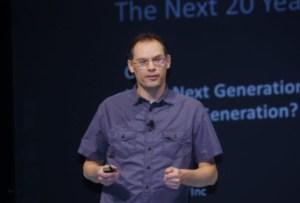 In doing so, Epic is joining a number of game-platform owners who are courting developers with actual cash to help them create games that run on that platform. From a business view, it pays to invest in their own platforms. In this case, Epic Games is competing with rivals such as Unity for the hearts and minds of developers. And when it comes to creating a game that shows off a platform, cash is now king.

Tim Sweeney, the chief executive of Epic Games in Raleigh, N.C., told GamesBeat that Epic will award $5,000 to $50,000 to developers with “no strings attached,” other than that they have to use Unreal Engine 4, a set of tools that enables developers to create games with high-end graphics and cool physics effects.

“When a developer succeeds with the Unreal Engine, we succeed,” Sweeney said. “We are trying to make developers more successful more quickly. We have heard pervasively that money is a real issue.”

Sweeney has been programming since he was 10 years old, and he released his first game, ZZT, in 1991. He used money from mowing lawns for two summers to fund the game, and his friend Mark Rein helped out using his credit card.

“The goal of this is to help people develop more games without having to mow lawns,” Sweeney said.

The Unreal Dev Grants will be awarded by members of Epic’s teams. Developers will continue to own their intellectual properties, and they are free to publish however they wish. Epic won’t be taking an equity stake in the developers in exchange for the money. Developers can go ahead and raise more money via crowdfunding or other methods if they want.

Interested developers can send info about their projects to unrealdevgrants@epicgames.com. Projects have to reach a “working prototype” stage to be funded.

“We’ll meet as grant applications come in,” Sweeney said. Over time, the company will give awards to the best projects. Besides games, Sweeney said that Epic will consider proposals for animated features, architectural visualizations, marketplace content, and even virtual reality apps.

“It’s been brewing for a long time,” Sweeney said. “In the early days of Unreal, we had our ‘make something Unreal’ awards.

“It is directed at anything that stands out,” he said. “Graphics are one differentiator. It is not just aimed at high-end games. We are wide open. They don’t even have to be games. For the next six months, we’re also looking for awesome virtual reality projects.”