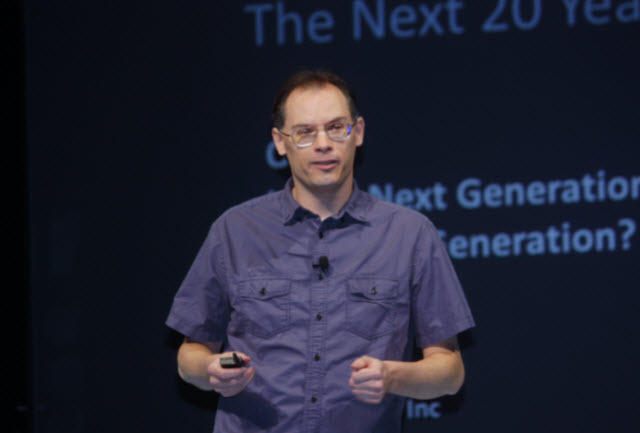 As chief executive of Gears of War developer Epic Games, Tim Sweeney has been on the forefront of video game graphics for a couple of decades. So the DICE Summit, which is giving him a high honor today, turned to him to explain how graphics technology for games will evolve over the next 20 years.

Sweeney, a shy but brilliant programmer who helped create the backbone graphics engine for Epic’s blockbusters, predicted in his talk that games will look better and better, and upcoming advances will be so good, that console makers will be able to introduce next-generation machines that will blow us away with their visual quality. That point is up for discussion. Nintendo proved with the Wii that gamers may care more about innovations with the user interface—such as the motion-sensing Wii remote—than they do with graphical quality.

“How good is good enough, and how close are we to that now?” Sweeney asked.

Our eyes are equivalent to the quality of a 30-megapixel camera. You don’t perceive improvements in frame rate beyond 72 frames per second. Many games already run at a rate of 60 frames per second. The best resolution for humans, then, is 8000 x 4000 pixels, or several times better than today’s best displays. That is about 20 billion to 40 billion triangles per second in terms of graphics rendering.

“The limit really is within sight,” Sweeney said.

Graphics technology tries to calculate approximate renditions of reality. In Doom, the id Software first-person shooter from 1993, the developers were able to create a first-order approximation of reality. Now we’re getting enough computing power to get a third order of approximation of reality, as seen in Epic’s Samaritan demo (shown below). Doom’s rendering required 10 megaflops; Unreal in 1998 required 1 gigaflop; and now the Samaritan demo requires 2.5 teraflops, an order of magnitude higher.

Doing a human face with movie-level accuracy is still very hard to do, Sweeney said. He believes that chip makers could double computing power every two years (as predicted with Moore’s Law), and that could continue for quite some time (perhaps even a couple of centuries) with the vertical stacking of chip circuitry and other advances in leading-edge physics.

That’s a bold claim, but predictions about how fast technology will advance in the long term always tend to fall short of reality.

“Within our lifetimes, we will be able to push out enough computational power to simulate reality,” Sweeney said.

“Kinect carried the technology for sensors to its amazing completion,” Sweeney said. “We are going to see some of the possibilities of what will happen over the next decade or two.”

He is also fascinated by cloud computing, which supplies the intelligent answers to Apple’s Siri via the Internet. He said that OnLive and Gaikai hold a lot of promise in creating cloud-based services where you can play high-end games without needing high-end hardware.

“Only question is whether a game runs in your living room or in a server,” he said. “It’s not going to change everything, but it will make things more convenient for gamers.”

In a wild prediction, Sweeney said that physical resources will become scarce, but virtual resources are unlimited, and we may see more of our economy shift from real-world to virtual goods. The worldwide real estate industry is worth $25 trillion, but a virtual economy could be a lot bigger than that.

Sweeney said he thought that Samsung’s transparent displays (shown at the recent Consumer Electronics Show) and augmented reality smart eyeglasses could be cool as well.

While the world is creating new game platforms now, such as smartphones and tablets, Sweeney thinks that will change, and we will see the industry converge on a smaller number of platforms. He is fascinated that tablet computers are stealing a march on the PC.

“We’ve just barely scratched the surface of the consumer applications of new technologies,” said Sweeney. “It’s going to lead to an entirely new world. I see a bright future for the future of computing and its implications for games. Our industry’s brightest days are yet to come.”