Tim Sweeney is of the best-known technical experts in the game industry and the CEO of Gears of War creator Epic Games, and he stirred up a big debate about the future of Windows. In an op-ed piece in the Guardian and in an interview with GamesBeat today, Sweeney said that he worries that Microsoft is making it hard for developers to create games and programs that do not use its Windows app store — and that move could close off what to date has been an open platform.

The future of the Windows PC is at stake here. Sweeney said that the personal computer industry is expected to be open. “Many businesses and the U.S. economy depend on it,” he said. Indeed, the Windows PC has been a platform for economic success, open applications, and third-party developer freedom for a long time. To close it off could be controversial, and that’s why Sweeney said he is speaking up.

In our interview, Sweeney said that everyone has to be vigilant because Windows 10’s design “encroaches on user freedom more than any past version.” Sweeney believes Microsoft can extend that design to what it does with third-party applications like the kind that Epic, Electronic Arts, Activision Blizzard, Valve, and many other PC game and app developers make.

In his Guardian piece and in our interview, Sweeney insisted that UWP is locked down, that it’s impossible to download UWP apps from web sites of publishers and developers, to install them, update them and do commerce outside of the Windows store. The option for enabling an alternative is buried in the user interface, and this “side loading” is very difficult. In the past, the Win32 interface had no such restrictions.

“This is complicated techie stuff, and it’s hard to get it out of programmer land into mainstream understanding,” he said. “There are two sets of programming interfaces on Windows which all applications are written to. The existing one is called Win32. Everything from Steam to League of Legends to Photoshop is written to this Win32 interface. Now Microsoft has introduced a new interface that could in the future replace that, the Universal Windows Platform. Unlike Win32, UWP has the advantage of running on a lot of different Microsoft devices besides UWP.”

In response to Sweeney’s allegation, Kevin Gallo, corporate vice president of Windows at Microsoft, said in a statement to the Guardian, “The Universal Windows Platform is a fully open ecosystem, available to every developer, that can be supported by any store. We continue to make improvements for developers; for example, in the Windows 10 November Update, we enabled people to easily side-load apps by default, with no UX required. We want to make Windows the best development platform regardless of technologies used, and offer tools to help developers with existing code bases of HTML/JavaScript, .NET and Win32, C+ + and Objective-C bring their code to Windows, and integrate UWP capabilities. With Xamarin, UWP developers can not only reach all Windows 10 devices, but they can now use a large percentage of their C# code to deliver a fully native mobile app experiences for iOS and Android. We also posted a blog on our development tools recently.” 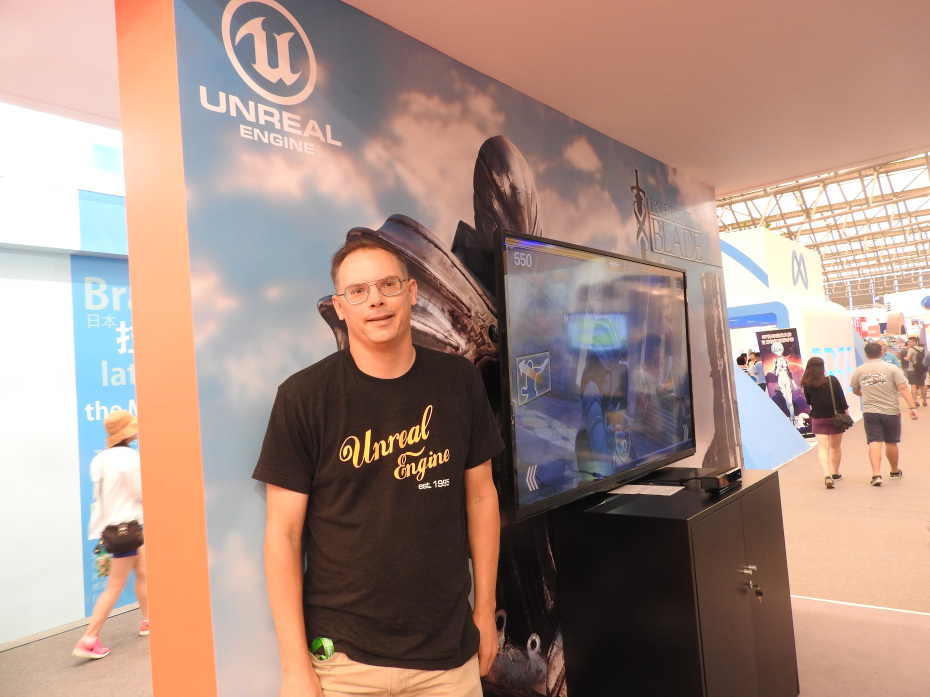 Above: Tim Sweeney, CEO of Epic Games, after a talk on the future of games at ChinaJoy 2015.

In addition, Phil Spencer, head of Microsoft’s Xbox division, tweeted, “Windows has always been an open ecosystem welcoming the contributions of hardware and software partners, and will always continue to be.” He also said that Microsoft would address the UWP issue at the upcoming Build conference.

Sweeney said he would love for Microsoft to prove wrong. But he wants to verify the Windows company’s official position in the details, and he thinks CEO Satya Nadella should speak on the matter and settle it.

“The ball is very much in Microsoft’s court,” he said. “It would be very easy for Microsoft to solve this problem if Satya Nadella got up and said we’re committed to making UWP an open platform that any company can distribute and any user can install from the web as easy as any existing application. Then the entire industry could say ‘great, problem solved.’ Microsoft has been very silent and that silence needs to be broken with very clear statements.”

Sweeney said that he isn’t yet satisfied that Microsoft is going to do the right thing. The situation needs “more scrutiny.” As an example, he said he found a lot of roadblocks when he tried creating an app as an experiment after Windows 10 came out. He tried to build a UWP app and install it from the Web. He had to create a Microsoft developer account. He had to get permission to develop for the platform and submit his app for approval by Microsoft (to be digitally signed with Microsoft’s digital rights management). He then had to change some operating system settings (which Microsoft says now don’t have to be changed). Then he could place the app on a web page in a .zip file. A user could download that and copy into Windows Explorer and then dig into it, find a script file, and run it with Windows PowerShell, which installs the application.

“It’s a very complicated process that requires permission,” Sweeney said. “I would seek Kevin’s clarification of that technical process and whether I am wrong. But it certainly isn’t at all in the spirit of a Win32 app, which anybody can do without Microsoft’s permission in downloading one. You could have a single button on the web page that downloads it. You click on it and it installs. You are two mouse clicks away from any executable program on Windows and on Mac with the existing status quo. That is very much not the case with UWP in my experience. I would welcome Kevin’s corrections if I am wrong.”

Sweeney’s fear has been around for some time. Before Microsoft was launching Windows 8, Valve Software chief Gabe Newell raised the same fear about whether Microsoft was going to close off the platform and go with a single store.

“I think that Windows 8 is kind of a catastrophe for everybody in the PC space,” Newell said. “I think that we’re going to lose some of the top-tier PC [original equipment manufacturers]. They’ll exit the market. I think margins are going to be destroyed for a bunch of people. If that’s true, it’s going to be a good idea to have alternatives to hedge against that eventuality.” 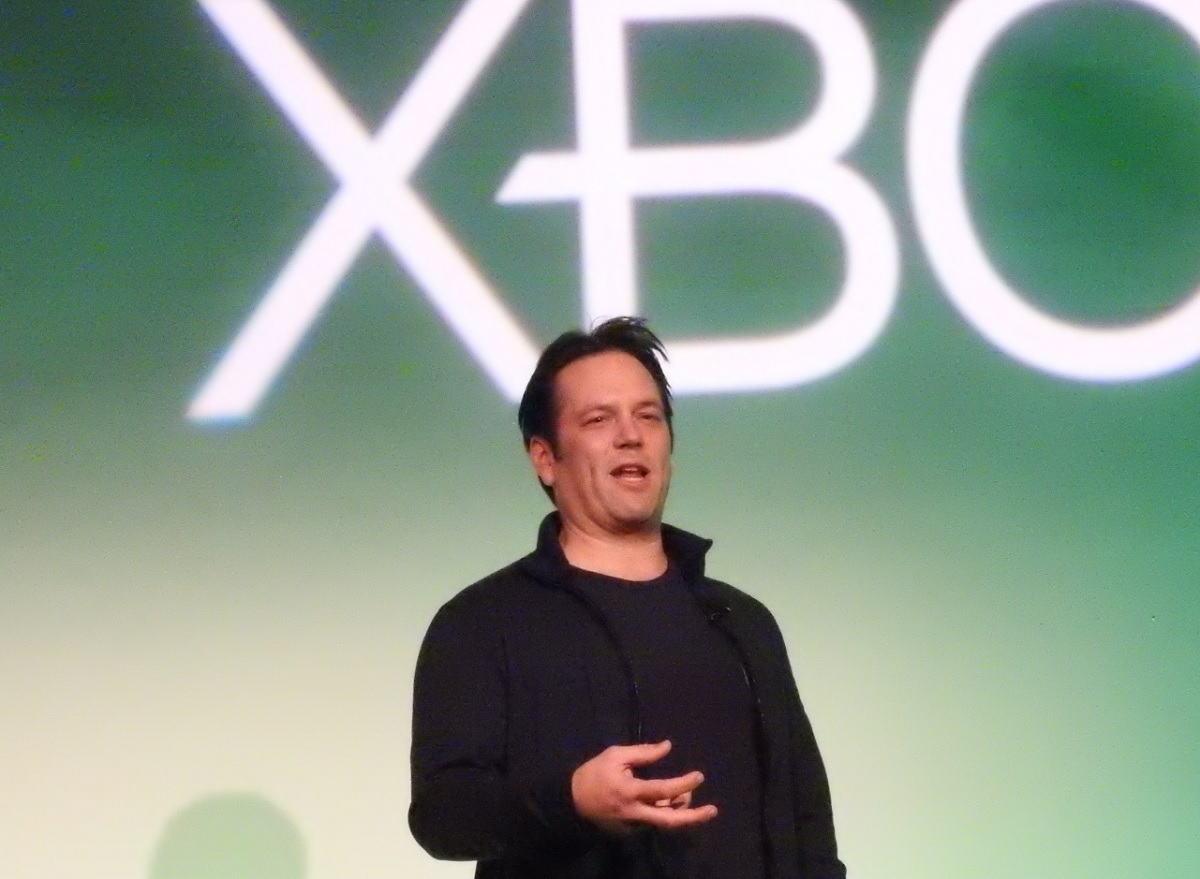 Above: Phil Spencer, head of Xbox, praised UWP at a recent event.

Valve went on to create the open, Linux-based Steam Machines platform. That was a lot of trouble, and so far, those machines have had a minimal impact on the PC market. But they represent an alternative. Sweeney said it’s hard to launch a new operating system in a market that has such momentum with other OSes. It’s hard to switch a library of apps from one to the other.

“The concern started with Windows 8, and Gabe was the first to speak up about it,” Sweeney said. “But the truth is that the Windows 8 store was such a lousy failure that it made no impact on the industry. There’s no fear that Microsoft will suddenly turn off the switch on all the other app stores. The risk is that they can advantage their store and disadvantage others so in the future they can get away with pulling that switch.”

Sweeney also said that the move is reminiscent of what Microsoft did to Netscape in the browser wars of the 1990s. The U.S. Justice Department launched an antitrust case against Microsoft, which lost the verdict and was forced to settle on the government’s terms. That agreement expired, and now Sweeney said he is concerned Microsoft is doing the same thing.

“I don’t think what Microsoft is doing is fair,” he said. “Whether it is legal under antitrust law is questionable. When Microsoft settled their antitrust suit, they entered into a 10-year agreement to do a certain set of things, such as the things they did to disadvantage Netscape. That period has lapsed and they are doing the same things again. You can see that very clearly in the Windows 10 interface decisions.”

Universal Windows Platform is still in its early days, but Sweeney said, “Users, developers, and everyone else question Microsoft’s intentions with this thing. It sure doesn’t look good.”

Sweeney has not been afraid to speak his mind in the past. He urged Microsoft to double the amount of main memory in the Xbox 360, and he also urged the company to make design changes for the original Xbox.

“It seems about once every decade, there’s some big controversy that Epic takes a public position on which is uncomfortable given our role in the industry,” he said. “There are forces in play now that everyone needs to know about and understand and think about so the industry can determine its future with full awareness, and not be surprised five years from now.”

By then, it would be difficult to install Win32 apps, and Microsoft’s Windows store may have 90 percent market share, he said.

Asked about the larger challenge for keeping platforms open that are owned by large companies — Apple, Google, and Amazon come to mind — Sweeney said that it’s more painful when an open platform closes itself off.

“Nobody complained about iOS being a closed ecosystem when the platform first launched,” he said. “Now with a billion users, Apple has the opportunity to reconsider whether it ought to be the sole gatekeeper of applications going onto and out of the platform. That’s a valid thing to reevaluate given the scale the platform has gained.”