The U.S. has nearly 227 million video game players of all ages, up 5.8% from 214.4 million a year earlier. This is according to an annual report by the Entertainment Software Association (ESA), the trade group that represents the game industry.

The annual 2021 Essential Facts About the Video Game Industry report shows that more people play video games than ever before and that players are engaged, diverse, and reflective of American society. The ESA released the report’s findings on July 13 in conjunction with the 2021 online-only Games for Change event this week.

As we all know, games were a savior in the pandemic, and 55% of gamers said they have played more during the pandemic and 90% say they are likely to continue playing after social distancing is no longer required.

“This past year, we saw tremendous growth. And there was a big question mark around whether that growth could be sustained,” said ESA CEO Stanley Pierre-Louis said in an interview with GamesBeat. “Once we started opening up venues, and once we were becoming vaccinated — and we wanted nothing more than more vaccinations and people getting healthy and getting out. That’s certainly priority one for us as an industry and as community members. We’re still seeing strong numbers in terms of engagement and purchasing. And so I think there is still a lot of growth occurring in video game playing.” 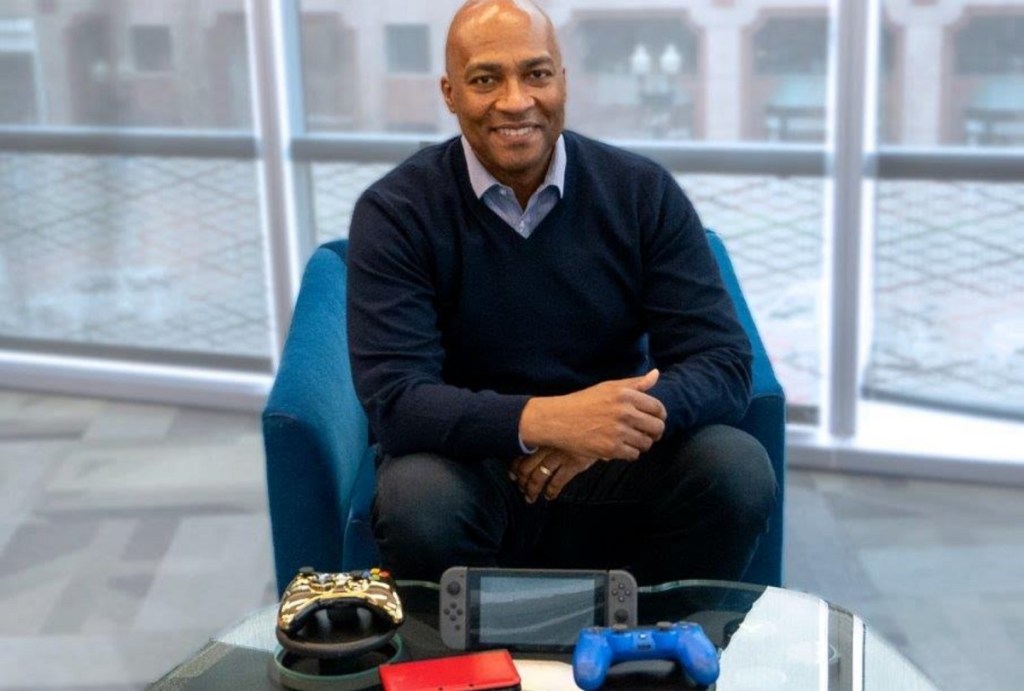 He said that people are playing everything more, from old catalog games to titles on the brand new consoles.

“Going from 214 million players last year to 227 million this year speaks to the fact that video games were a highly sought-after outlet for people, particularly during a period of social isolation and social distancing,” Pierre-Louis said. “We were excited to see that growth. And that growth is true in every demographic. Everyone is playing more.”

The report shares data gathered from approximately 4,000 Americans 18 and older about their video game playing habits and attitudes (margin of error 1.55%) earlier this year. 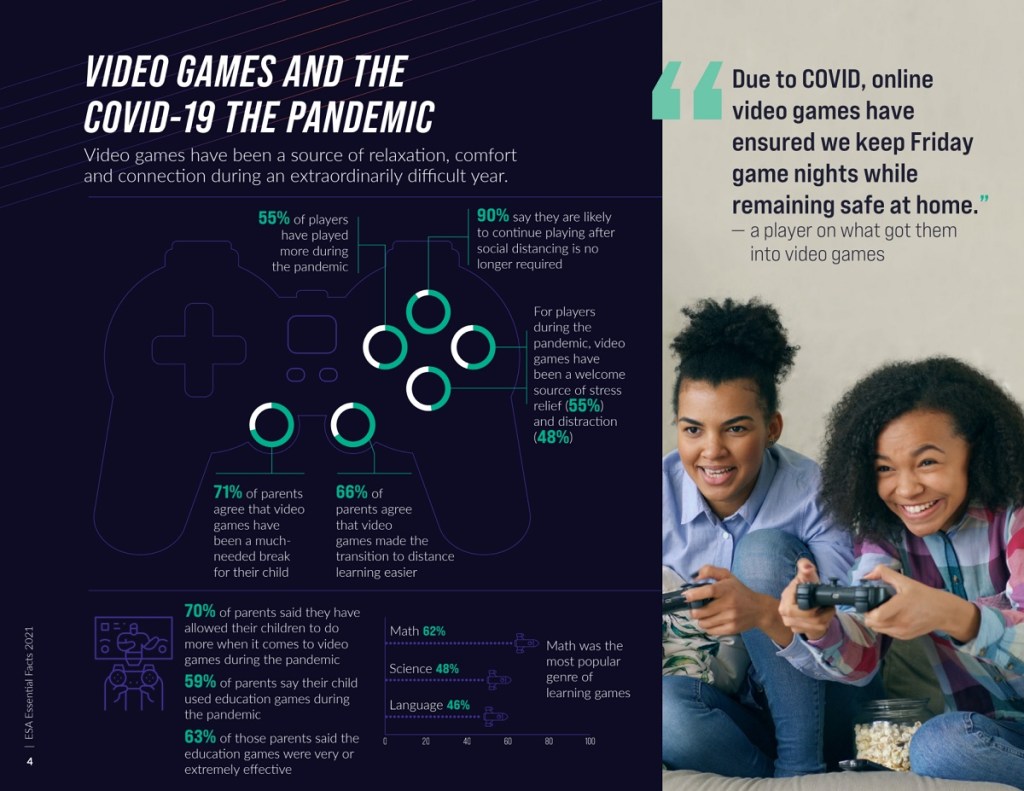 Above: People feel better when they play.

“We saw a tremendous reliance on games for mental relief, and stress relief, and stimulation, and also for connection,” Pierre-Louis said. “Part of what playing together brings people is a level of excitement and interest in the game. First and foremost, people are having fun playing games. These additional benefits make game playing even more fulfilling, because they hit on things that we need, particularly in this moment in time, including connection with others, and something that brings you joy.”

Pierre-Louis said that 90% of players say that video games bring them joy. And while 80% of gamers are over 18, about 76% of people under 18 play games, which means that with each passing year, a greater percentage of the population plays games.

“And as they start to enter adulthood, they continue playing. And many of them have kids and they play with their kids or introduce it to their kids” Pierre-Louis said. “You’re seeing a game-savvy population growing, and starting to really have a positive impact on our culture, on our economy, and society in general.”

Gaming’s place with entertainment and media 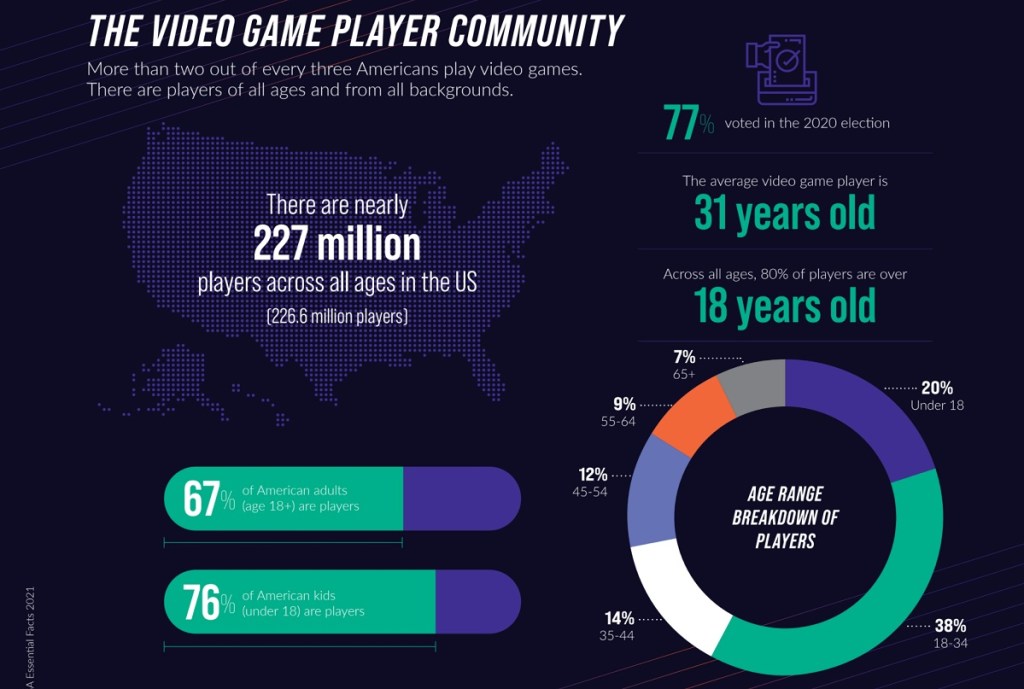 Above: Gaming is huge.

The ESA’s data is important to provide context for the gaming industry, particularly for government officials who are in charge of regulating gaming in some way. The data can trigger positive conversations about games and their reach, he said. The data is also important for the tech giants to understand, as well as the executives in the larger entertainment and media industry.

“What this survey does is provide that context, which allows for humanization of who we are as an industry, but also an opportunity to have a broader conversation about the impact we have on the economy, on creating jobs, and providing opportunities for more students to get into STEM and STEAM education opportunities (referring to science, technology, engineering, the arts, and math).

I asked Pierre-Louis about the PwC report that looked on the larger $2.1 trillion entertainment and media industry, and its top-down view of games.

“It was a really interesting look at not only where they think we are today, but where their forecasting might be in the next five years,” Pierre-Louis said. “And it speaks to the way video games have tapped into something very cultural. And doing it at a time when people were looking for a different kind of outlet. You know, consumers really enjoy the interactivity. Video games have been natively digital just because of the nature of how they’re created and how they’re distributed directly. I think there’s a lot of opportunity for growth.”

He noted how big games and worlds like Roblox and Fortnite are becoming and they’re drawing consumers into engaging environments where players are finding community and an ecosystem. Those companies have a chance to become platforms unto themselves.

“There are a lot of other industries where there’s an ecosystem around how entertainment gets produced, and what are the adjacent industries to it,” Pierre-Louis said. “Ours traditionally have been more technical in nature. We’re a technology-based industry, and therefore, we depend on silicon chips, and everything else around us and on retailers. Now that you’ve seen the growth of influencers and of the impact of the internet, we’re going to see experimentation in the other new ecosystems that bring games to people. Just think about how many people love watching people play games, right? That’s very good.”

Above: Gaming is a diverse community.

As for working with the administration of U.S. President Joseph Biden, Pierre-Louis said there is an opportunity because of the newness of the administration, and games have demonstrated their power in creating a lot of jobs at a critical time.

“Right now, the administration is focused on COVID economy, the environment, racial equity, and those are driving a lot of what you’re seeing in addition to infrastructure,” Pierre-Louis said. “So we’re moving with deliberate speed to ensure that they are hearing from us, but we also recognize what the priorities are with the administration.”

I also asked if the tech giants understand gaming.

“There’s so many different issues. On the one hand, we have seen companies like Google and Facebook embrace video game communities, gameplay, video game technology, in so much of what they do,” he said. “I think we’re seeing it. I think one of the things you learn in the videogame industry is a lot of these developments take time. They take a lot of resources, and they take a lot of talent. And they take a commitment to sustain games.”

He added, “The more companies commit to sustaining the innovation required for games, the more successful they are. But it does take some good money if you’re going to be in the game-making space. As we see with Google Stadia, trying to build that platform. I think for those that have created opportunities for additional video game ecosystems, like Twitch, that’s where you’re seeing a lot of use and interest, but with a different level of commitment. And, and so it’ll be interesting to see how different tech companies absorb the video game industry. I’ve been reading a lot about Netflix’s interest. It will be interesting to see what are they bringing to the table with respect to the games.”