The esports market has a very bright future as its revenues quickly approach $1 billion.

Professional gaming is expected to generate $278 million this year, according to the latest Global Growth of Esports Report from industry intelligence firm Newzoo. That’s up 43.1 percent year-over-year. The report also reveals that the number of people who are esports enthusiasts has grown from 89.7 million in 2014 to 116 million this year. And that level of growth is expected to continue. Newzoo is now expecting this industry to make more than $765 million by 2018 as the number of competitive-gaming enthusiasts reaches 165 million. 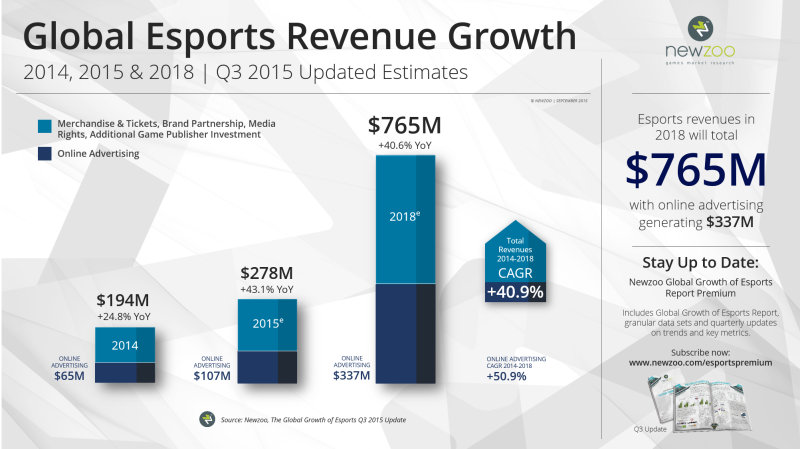 To clarify, this is not the money that a competitive game, like League of Legends, makes from its players through in-game spending. Instead, the esports market is narrowly defined here as the entertainment product of watching professionals play these types of releases. This business generates revenue from ticket sales, sponsorships, and advertising.

And that secondary business is establishing itself as a viable industry beyond the games themselves, and Newzoo credits the growth of esports to the interconnectivity of various global regions, higher profile events, and companies like the livestreaming video site Twitch that make it easier to consume this content.

This is creating an environment where more people are watching esports casually, and many of those occasional viewers are turning into full-blown fanatics.

Here’s how Newzoo puts it:

“The majority of consumers that now engage with esports more than once a month (esports enthusiasts) have migrated from the ‘occasional viewer’ audience. In turn, occasional viewers show a 3 percent decline. Combined, this results in a 12.4% growth of the total global esports audience.”

So the overall audience is growing while occasional viewership is actually dropping. This means that competitive gaming is onboarding new fans at rapid rate. And naturally, when you have tens of millions of people heavily engaged in an event, that’s going to attract marketers, and that’s happening with esports. 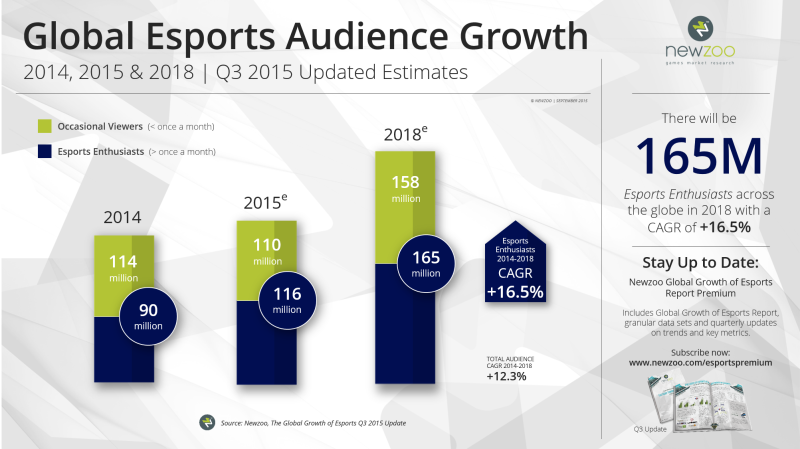 Newzoo was previously only expecting esports revenues to grow by around 30 percent — not the 43 percent it is now projecting. The intelligence firm points out that online advertising is the biggest driver of that influx of cash. This segment of pro-gaming revenue is up 64.2 percent year-over-year, according to Newzoo data. In North America alone, marketers are expected to spend double what they spent last year.

And it’s easy to see that if esports can keep growing its audience, marketers are only going to put more money into this entertainment product.