Two divergent paths come together to lead to a new way.

Atlus surprised the role-playing world last year with the announcement of a crossover 3DS game that would have the worlds of the company’s own Etrian Odyssey 3D dungeon-crawler franchise mixing with Spike Chunsoft’s randomized roguelike series, Mystery Dungeon. Both franchises have cult followings, both are combat heavy, and both are known for being challenging. While the news of this union was certainly exciting for fans, no one knew exactly what to expect.

Both series are dungeon crawlers at heart, but how the they create their dungeons is a key difference. Etrian Odyssey, a 3DS exclusive, uses the system’s bottom touchscreen as a cartography tool, letting players map out dungeons on a grid — a requirement for the massive labyrinths. Mystery Dungeon games are almost the opposite as dungeons are randomly generated, never appearing the same way twice and making for some completely unpredictable adventuring. So, how would these fit together?

Somehow it all worked out. What we got was an interesting roguelike dungeon explorer with an turn-based role-playing twist — and a side of roaming superbosses. 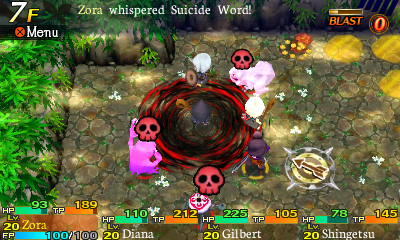 Above: This isn’t as dark as it looks.

The dungeons of Etrian Mystery Dungeon lean heavily toward the Mystery Dungeon side of the partnership as they’re randomly generated — exactly the opposite of Etrian Odyssey’s fixed, map-able crawls. Instead of Odyssey’s first-person dungeon corridors, this gives a top-down view, where you can see up to four party members from above.

Your job as captain (only one character can be controlled at any time) is to keep an eye on your party’s surroundings, making sure to guide each member toward the most advantageous position on the floor’s (invisible) grid, keeping mindful of both party member and enemy attack ranges, strengths, and weaknesses. You’ll do this all while avoiding hidden traps and managing resources to make sure your team doesn’t go hungry. And if that wasn’t enough, this game sticks firmly to the roguelike formula where the movement of every character and creature takes place on a turn-by-turn basis, meaning that every step is a challenge. It’s not an easy game.

Everything outside the dungeon system feels firmly based in the Etrian Odyssey world. The classes, items, the hub city, menus, systems, and even the art style are straight out of Atlus’ playbook. Etrian Odyssey’s best feature is its guild building; that system’s party classes and skill system remain mostly intact, with a few considerations made for the new gameplay style. It has 10 classes, and each has its own specialized skill tree that players can dump earned skill points into to customize characters. It even has a new class called Wanderer — a nod to Shiren of Mystery Dungeon fame — made especially for this game.

The specific blend Spike Chunsoft and Atlus created works so well that it’s easy to forget that two different franchises from completely different companies have been mashed together. 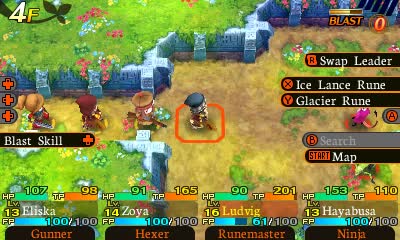 Above: The top-down presentation of Etrian Mystery Dungeon looks nothing like the 3D corridors of Etrian Odyssey.

In Etrian Mystery Dungeon, regardless of how well-prepared you are for a dungeon, you’ll find yourself holding on for dear life before too long, running frantically through corridors in the hopes that you’ll find something — anything — to help you out. In this sense, fans of either game series will feel right at home. But the challenges here have a few twists to them to keep things fresh.

As in any roguelike, death hurts in Etrian Mystery Dungeon. Dying in a dungeon warps you back to the hub town of Aslarga, stripped of a great deal of your money, most of your loot, and sometimes even pieces of your equipped gear. While you will keep your levels and skill progress, that’s not enough to save your pride.

Death comes easy when about any random enemy in these dungeons has the power to take your party out on its own, let alone the incredibly challenging bosses that await further down the hole. But it’s just as easy to find yourself lost in a room full of hidden traps, or worse, in a Monster House room where your party gets an overwhelming surprise. You’ll never know what’s around the next corner but you should always expect that it could be your last corner. The random nature of the dungeons makes exploration fun, but it also makes it difficult.

It gets harder still: fans of Atlus’ series will recall the series’ floor-wandering bosses called F.O.E.s. This crossover features a similar variant, called D.O.E.s, and you’ll want to stay clear of them. These monsters roam the lower depths of dungeons, tracked by a glowing orb on the map. But they’re quite a bit more mobile than their predecessors, able to chase your party over multiple dungeon floors, and even outside of the dungeons, leaving the town vulnerable.  Only the strongest and best prepared teams should even bother encountering these monsters as the likelihood of being wiped out completely is very high.

For as brutal as this all sounds, the ever-present tension and challenge makes Etrian Mystery Dungeon’s victories feel great. Continually finding yourself barely making it out alive works out to be an extended high. 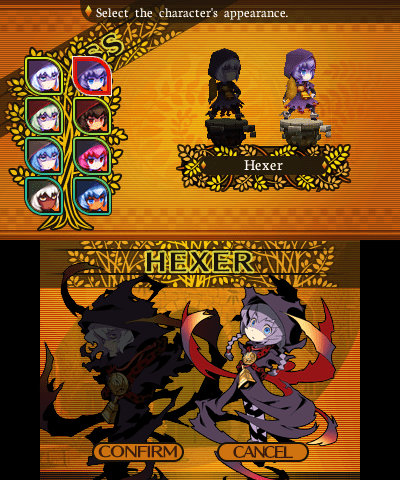 Above: The Hexer has some pretty handy tricks up its non-existent sleeves.

Etrian Mystery Dungeon adds a sort of secondary game that has the player protecting and investing in the hub town of Aslarga. Funds gained from exploration can be spent on building up city businesses, with increased levels opening up new perks for adventuring. For example, leveling up the goods shop a few times opens up brand new healing items that can help further dungeon exploration. Every town location upgrade brings some kind of benefit for the adventurers.

Eventually, the ability to build dungeon forts opens up. These provide an additional layer of defense for the town, keeping the monsters continued inside the dungeon. These forts can also double as warp points for returning parties. It is possible for a D.O.E. to destroy a fort and get out, though. If one does, it will attack the town and destroy its businesses. You’ll have to rebuild those businesses (with lots of money) before you are able use those facilities again.

This creates a subgame of trying to keep D.O.E.s at bay through building forts, staffing them with fighters, running from encounters (or fighting back), and upgrading the town. This adds an additional layer to the dungeon crawling main game to continually keep players on their toes.

While it couldn’t have been easy to meld two well-established game franchises together into a new offering, the developers of Etrian Mystery Dungeon pulled it off — and then added an impressive level of polish.

With the high number of attacks and skills found across 10 character classes, it’s really easy to get lost in command or customization menus, and that’s not counting all of the available weapons, items, and loot you’ll have to manage. A handy custom shortcut system lets users assign skills to button combinations, enabling players to trigger preferred skills without having to navigate a series of lists. Similar shortcuts have been implemented for the game’s navigation and equipment systems, too.

The polish also extends to the presentation. Etrian Mystery Dungeon sports some of the most highly detailed visuals I’ve seen in a 3DS game, especially in the dungeons. Each is unique in design, but they all shine with vivid artwork and impressive lighting.

The lush orchestral musical score is so well done that it’s on par with big-budget console games. It has everything: peaceful melodies, upbeat toe-tappers, and energized battle pieces. Some of the dungeon-specific themes are so tense that they’ll have you sweating on their own. 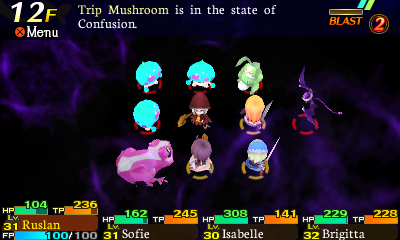 Above: It’s pretty easy to find yourself completely surrounded in a dungeon.

It’s good that Etrian Mystery Dungeon downsizes Etrian Odyssey’s five-member parties by one, as keeping track of four is hard enough. While you’re free to enter dungeons solo to avoid this hassle, only the most skilled and patient players will manage to get anywhere without a full team. And forget D.O.E. fights on your own.

With the player only having control over one character, you’re stuck trusting the A.I. to take care of the others. While the other three are usually fine on their own, things get messy when you encounter more than a few enemies in the same room. Chances are that such situations will require a lot of manual switching between characters. Even then, it’s hard to keep track of attacks and status effects as the display area is fairly limited. It’s likely that one character will be drawn away by attackers beyond your view while you’re addressing issues elsewhere, making it easy to feel overwhelmed.

When random isn’t in your favor

The dungeons of Etrian Mystery Dungeon all have a set number of floors, but you’ll have no idea what that number is going into them. The first few ease you in gently with just a few floors, but the rest are deep enough that you’ll find yourself stressed from the combined pressure of dwindling resources, hordes of enemies, and the looming D.O.E.s, wondering if you’ll ever see the end.

The randomized floor layouts of these dungeons sometimes take that pressure through the top of the gauge. Being chased down by an aggressive enemy through seemingly endless twisting corridors only to end up in a room full of traps and — surprise — more monsters feels unfair at times. When a situation like this hits some 20 floors down, and then you die, having to re-navigate another 20 randomized floors to make your way back is a hard pill to swallow.

Roguelikes are supposed to be difficult, sure, but sometimes the difficulty here can really get to you. 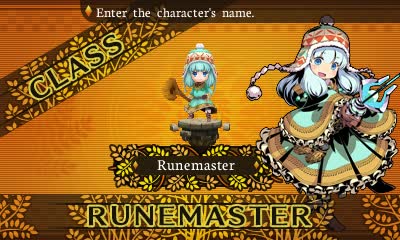 Above: Every class of Etrian Mystery Dungeon is cute. Even some of the bad guys are cute.

Make no mistake: Etrian Mystery Dungeon is hardcore game. With every floor the difficulty and pressure increases, leading to a point to where only those with nerves of steel and the patience of a saint will do well. But as the difficulty scales, so does the enjoyment. Successfully crawling out of a dungeon is supremely rewarding.

This crossover is a fresh, inspired roguelike made from the best parts of two very good role-playing game series. It takes the random dungeon layout of Mystery Dungeon and mixes that with the team-based strategy of the Etrian Odyssey series to make a new dungeon-crawler that should hit home with fans of either series as well as those looking for a new deep and challenging experience for 3DS.

Amazingly, neither source franchise feels compromised in this union. And while it’s easy to point out where the game’s many influences stem from, the greater game feels unique. This spinoff is good enough that it should be a new franchise going forward.

Etrian Mystery Dungeon is available on the Nintendo 3DS. Atlus provided GamesBeat with retail code for the purposes of this review.