SHANGHAI — The vast wealth of the Chinese upper class — and the thirst everyone else has for cool gear — was evident when I strolled through this city during the ChinaJoy Expo last week. Fancy cars lined the streets, and people were staring at them longingly. Darren Jobling, the chief executive of game publisher Eutechnyx, figures that Chinese gamers are full of lust for cars that they can’t afford to drive. That’s why he’s launching Auto Club Revolution 2.0 in the Chinese market soon.

I caught up with Jobling at KongZhong’s booth at ChinaJoy. The company is publishing the game for Gateshead, United Kingdom-based Eutechnyx in the Chinese market. Eutechnyx has a bunch of Chinese game developers in Chengdu, China making the game, which features more than 50 car models licensed from McLaren, BMW, Ford, and others. Jobling showed off the game using racing simulators, the Oculus Rift virtual reality goggles, and, of course, show girls known as booth babes.

While Microsoft and Sony try to attack the market at the high end, Jobling is going for free-to-play gamers who don’t have money to drive real cars. So far, the testing is going well. Here’s an edited transcript of our interview with Jobling. 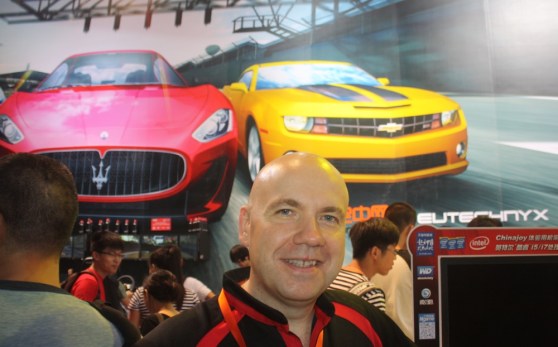 Above: Darren Jobling, the CEO of Eutechnyx.

GamesBeat: What are you showing here?

GamesBeat: What sort of launch window are you in now?

Jobling: We’ve just completed a very successful alpha test. In China, they have this very complicated north versus south Internet system. It’s important to do technical tests to make sure the north can play with the south and all that stuff. We’ve done all that. The next stage will be one more alpha test, and then hopefully we’ll be able to launch next year.

We’re going to make sure we get it right before we go out there. There’s a lot of competition in free-to-play in China. We need to give a great impression out of the gate.

GamesBeat: How many simultaneous players are you supporting?

Jobling: We’re only supporting a very small number at the start, just to test the technical features. In the full game, it needs to be handling concurrent users in the hundreds of thousands. We’re at that sort of scale in China.

GamesBeat: How do you achieve that kind of infrastructure?

Jobling: It’s all proprietary technology. We’re known for console games historically. We’ve always had 16-player online console racing. We’re using that technology and applying that to the PC online. We have a lot of Steam features. We’ve done Auto Club Revolution version one in the west.

GamesBeat: I saw you had an Oculus demo here.

Jobling: Racing games make a great application for Oculus. You’re fairly stationary. You sit in the car and the car is what’s moving. You don’t get as much of the nausea effects and things like that. What you can do, though, is literally look up at your rear-view mirror, or to the left and right at the side mirrors, or back at the guy trying to overtake you inside his car. It’s working very well. We’re the only people at ChinaJoy showing Oculus Rift, to our knowledge. The Chinese have been blown away by it. 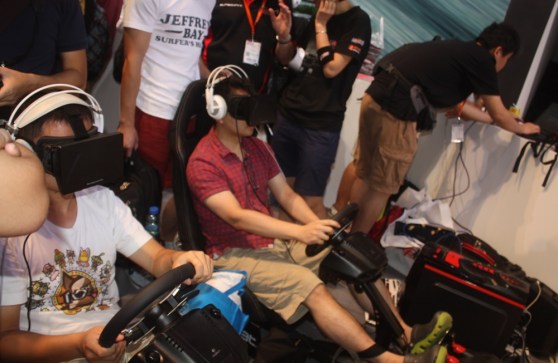 Above: Auto Club Revolution with Oculus VR at ChinaJoy.

GamesBeat: Do people have to train on it a bit? I imagine it’s not that easy to control.

Jobling: When we came to China and first set out, we always saw China as being a huge growth market for us personally. We spoke to most of the companies here, though, and the problem is, with there not being an online racing game here so far, they said, “Well, we’ve got no data to look like.” However, we spoke to KongZhong and they saw it as being a blue ocean. There’s nobody else doing it currently. There’s a huge car culture in China. Everybody aspires to own a BMW or a Jaguar, that sort of thing. They saw a great market for it. They’re also well-known for bringing western games into China and beach-heading them. They did World of Tanks. They just launched Guild Wars 2. They’re a very good partner.

GamesBeat: How does that improve things?

Jobling: You don’t have that interaction between the web and the client. Also, you can do much higher-quality graphics. Something like the garage, where you store your car collection, can look amazing. We can have people working in the garage, fixing cars, changing tires, all that sort of stuff. It’s a much more alive, interactive world for your car collection. It’s also somewhere you can invite your friends.

GamesBeat: How large are the multiplayer competitions?

Jobling: It’s currently eight-player online for each individual race. Obviously the social network within the game allows millions of people to interact with each other. Also, we’re due to release multiplayer tournaments. You can have thousands of players work through a tournament structure to find one winner.

GamesBeat: What about the impending arrival of other games, like Forza?

Jobling: The consoles are coming in the free trade zone, true. Obviously they’re still paid. People have to buy the whole game. What you are going to see — when KongZhong introduced World of Tanks into China, within 12 months every competing company had a tank game. A lot of people are eyeing Auto Club Revolution with interest and looking to have their own racing games.

The difficulty with racing games is that it’s not like a shooting game where you can just come up with your own original IP. You need to have the car licenses. There are more than 50 car manufacturers in Auto Club Revolution and more than 100 upgrade manufacturers. We have the relationships with tracks like Daytona, Indianapolis, and Brand’s Hatch. It’s not as easy to get into online racing. That’s quite a big hurdle. It’s only the likes of us or EA, among independents, that can get all these licenses.

GamesBeat: How do you plan to monetize the game?

Jobling: It’s no secret that 90 percent of players will be playing for free. Those other 10 percent will be paying for progression. You can grind away for a few hours a day, or you can accelerate your progression by paying some money.

It’s very important to note that the Chinese are massive consumers of content. In the west, an average play session might be two hours. In China, it’s nothing for people to play as much as six to 12 hours, and during that time they’re consuming content like mad. That’s something we have to be careful of, that balance between east and west.

GamesBeat: Have you figured out what percentage of players are likely to be that enthusiastic?

Jobling: We definitely have the hardcore among racing game players, which amounts to at least 10 percent of the market. We’re aiming to make the handling a bit easier for the Chinese version, though, so it’s easier to get into. It’s not a hardcore game. We’re trying to aim more for auto enthusiasts, trying to expand the market a bit. We’ll start with the hardcore and get those guys on board, then expand outward.

GamesBeat: How many players use a wheel and pedals versus the keyboard?

Jobling: Most people will be playing with the mouse and keyboard. A lot of people in China are playing at internet cafes, so it needs to be one-handed, because everyone wants to be able to smoke at the same time as they drive. We’ve done a lot of that sort of stuff specifically based on Chinese player feedback.

On average, less than 20 percent of players have steering wheels and pedals and those sorts of things. Most of them will be playing with the keyboard or a game pad.

GamesBeat: Do you think more Western developers will be following you into this market?

Jobling: This may be a little controversial, but in the next five to 10 years, you’re going to see a lot of the big Chinese players, the ones with a lot of money, acquiring companies in the West. People like Tencent are just huge. 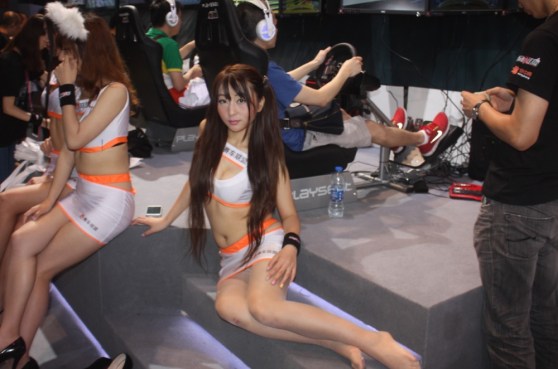 Above: A show girl at the KongZhong/Eutechnyx booth at ChinaJoy.

GamesBeat: In the last two years, that’s already been true. Ninety percent of the biggest acquisitions have been by companies in Asia.

Jobling: That’s only just started. It’s a massive opportunity for western developers who might have not even thought about China. We thought of China fairly early on, because we have our own studio in Chengdu. We came out to Chengdu and saw what was going on and thought, “We need a slice of this.”

Western developers should certainly come out to ChinaJoy and see what’s going on. They’ll find the Chinese very collaborative. There’s a lot of good opportunities for western developers to get their games here.

GamesBeat: What do you think about all the involved presentation here, the booth girls and the stage shows? Do you have any option not to do that at this point?

Jobling: I think you do have the option. It appears to us that most people are coming to just play the games. If you put on a show, it does help to drive the traffic toward you. Right now, though, with ACR, I think Oculus Rift is the bigger pull for the crowds.