Bullet hell has come to virtual reality with the pending debut of Evasion.

Archiact has taken VR combat to the max with its new sci-fi bullet hell shooter. I played the PlayStation VR version at a recent Sony event, and so I’ve got a heads-up on the demo that Sony will show at the Electronic Entertainment Expo (E3) trade show in mid-June.

You can play solo or on a two-player co-op team as you try to save an embattled human colony from swarms of invading aliens dubbed Optera. The game has an action-packed campaign mode for solo or co-op play. In each stage of a mission, you have to advance forward and clear a level of swarming aliens.

The game focuses on both movement and comfort, and it supports the PSVR’s Aim Controller, which has a real immersive feel when it comes to shooter controls. It has full body avatar animations powered by IKenema.

It has a replayable “survival mode” designed for teams to take on intense challenges. The game runs on Unreal Engine 4, and it has 3D spatial audio. The Faro mining colony doesn’t look like anything special, except that it’s infested with aliens that you have to shoot.

My demo started with a tutorial that taught me how to use my weapons. They were pretty intuitive. I chose to fight as the heavily armored Warden. Other classes include the Striker, the Surgeon, or the Engineer. The latter two can use tether links to heal damage or bolster an ally’s weapons. 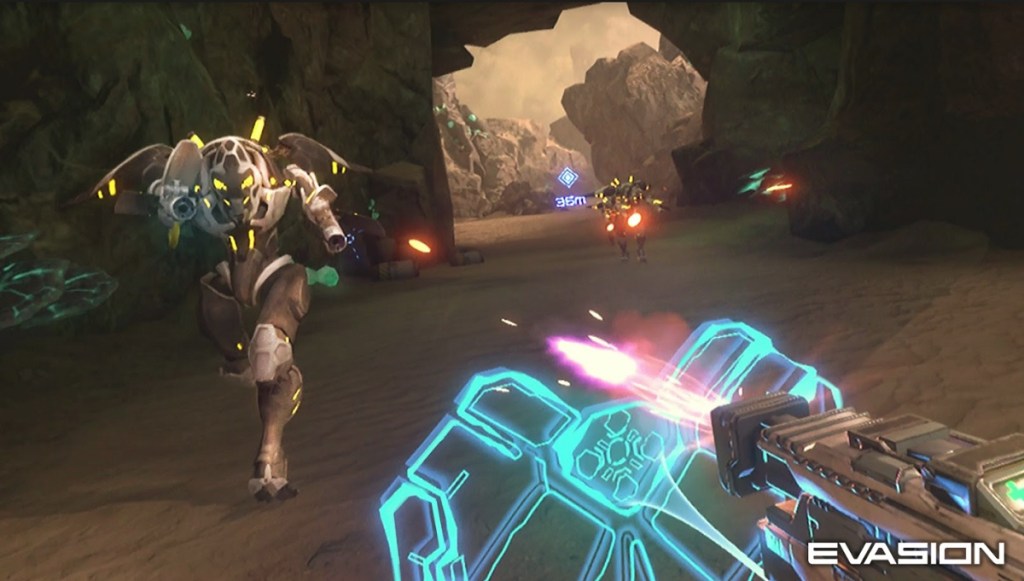 Above: Watch out for the charging Paragord.

You can use a tether lash to snatch insect-like enemies out of the air and hurl them against buildings. The smallest enemies are gnats, which hover and try to attack you from the side. The Paragords, or foot soldiers, fire their weapons in short bursts and keep changing positions. The bombers are like pill bugs — rolling bombs that you have to attack before they hit you.

You can snipe from behind cover and charge up your blaster to unleash a surge attack at enemies. I had a gun with a shield attached to it. I found that quite useful because the enemies kept firing at me, and I had to shoot while using the shield to block their fire.

The heavy gun was enough to take out a lot of enemies, but they fired at me in a coordinated way, and I had to make sure that I either blocked or evaded fire as much as I shot. At the end, I had to fend off a giant bee that was firing deadly blasts at me. Sadly, I died just before I was about to take out the Queen Bee. I had three lives, but I lost each of them in that final fight.

Archiact specialized in early virtual reality development when it first started in 2013. Now the company has 25 employees and offices in Vancouver, Canada and Shanghai, China. Archiact provides virtual reality entertainment across all major platforms in markets around the world and has been working on the title for two years.

I think they’ve done their job well. I was sweaty when I pulled off the VR headset.