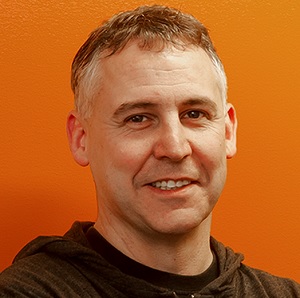 Above: David Reid of Motiga

“This game is catching a lot of attention because it has a familiar format and a great art style,” Reid said. “It has moment-to-moment gameplay and more vertical combat.”

Bellevue, Wash.-based Motiga has attracted a lot of attention because it recently came out of stealth mode and announced it has received $20 million in funding. Reid will help the company publish Gigantic, which has been in the works for two years. Motiga recently took the wraps off the 5-on-5 action game at the PAX Prime fan show in Seattle.

The game is in public alpha testing now. In the game, heroes battle each other alongside massive guardians in a multiplayer online battle arena (MOBA). Players have to both attack the enemy guardian and protect their own. The game has destructible environments. The title is scheduled to debut in 2015.

Reid said the company realizes that it has to be successful with its free-to-play business model and succeed in territories such as Asia.

“We believe that the style of Gigantic will resonate in both the East and West,” Reid said.

Rivals such as Super Evil Megacorp are also creating multiplayer online battle arena games with giant characters, but that company is focused on tablets and smartphones while Motiga is focused on the PC.

Chung said in a statement, “We are grateful for the all positive reactions from gamers since the announcement of Gigantic in July. As we look to the future, I was looking for a head of publishing that could do justice to the game, and David was an obvious fit given his tremendous track record of success.”

As for leaving CCP, Reid said, “They went through a transition in the last six months. This was the proper time. With this team of veterans, it wasn’t hard for me to make the move.”

Founded in 2010, the company’s investors include NetEase, Smilegate, and Neowiz. The company has more than 65 employees.