Being a fighter pilot in Eve: Valkyrie isn’t as cool as flying an X-Wing with Red Squadron. But so far, it’s the closest we’ll get to recreating our Star Wars fantasies in virtual reality.

The intergalactic dogfighting game is a spin-off of developer CCP Games’s decade-old massively multiplayer online universe, Eve Online. While Eve Online also has ship-to-ship battles, they’re a bit more cerebral than Valkyrie and require a lot of in-game resources. The multiplayer-only VR game makes space combat more accessible by turning it into a fast, arcade-like experience that puts you in the cockpit.

At this year’s Electronic Entertainment Expo tradeshow, I had several chances to play the newest version of Eve: Valkyrie. It has become a personal E3 tradition for me: This is the third year in a row I’ve played it at the show. But no matter how many times I see Eve: Valkyrie, I always find something new to admire.

Last year’s demo was the first time it looked like a real game, a dramatic improvement over the seven week-old project I played in 2013. This year, in addition to a new map and vehicle, I loved seeing the smaller details, like the way your allies (blue) and enemies (red) leave behind colorful streaks of light as they fly through space. 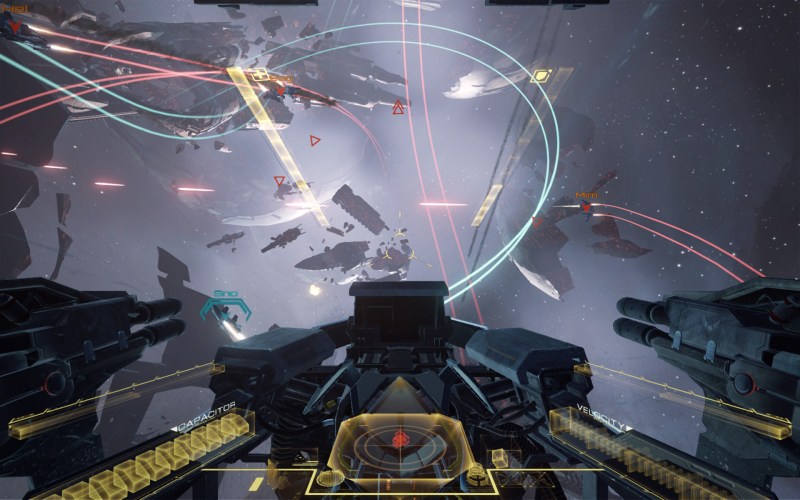 Above: The user interface blends in with the cockpit.

In my first demo, I used an Oculus Rift Crescent Bay prototype headset to fly into battle along with a convoy of large ships. It’s the same setup from one of the most recent gameplay trailers, where the player is on an escort mission. If you’ve already seen the video (embedded below), you know that it ends horribly with the fleet running into an ambush.

After fighting some computer-controlled enemies with my Wraith’s gatling lasers and missiles, a gargantuan ship that rivals the Death Star in size and capability came in and destroyed everyone with a concentrated energy beam.

The second time I played Eve: Valkyrie was with Sony’s Project Morpheus headset for PlayStation 4. The new map (Necropolis) took place some time after the harrowing events from the Rift demo. The area was now a graveyard and had a ton of wreckage just floating in space. This time I was in control of the Spectre, a new ship that’s slower than the Wraith but has more health.

The Spectre has a warp drive that’s useful for closing in on objectives or enemies that are far away from you. Its main weapon is a flak cannon that pummels foes with thunderous bullets. And best of all, you aim it by using your head.

Since the reticule follows your gaze, you can use your entire cockpit window to your advantage and attack enemies who are flying above you or near the sides of your ship. The Wraith’s missiles can aim freely as well, but it takes time to lock-on and fire them (and its front-facing guns can only fire in one direction).

With the flak cannon, you have the freedom to unleash hell at a moment’s notice. It was awesome. I felt like Han Solo and Luke Skywalker when they were using the swiveling turrets on the Millennium Falcon. 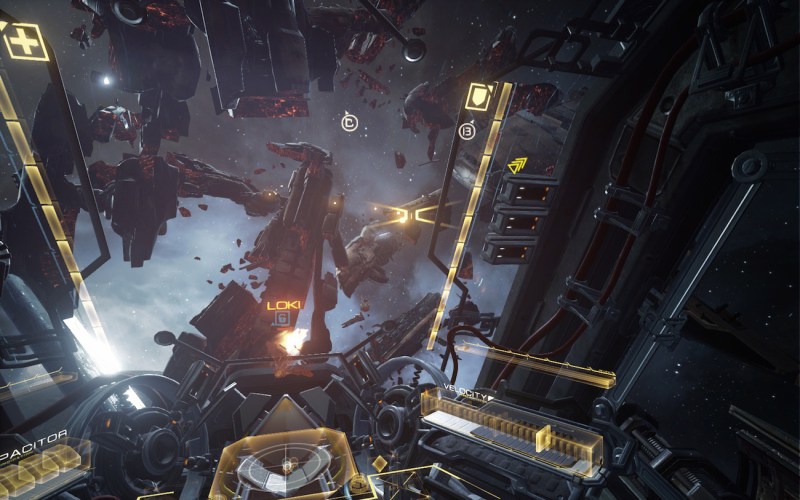 Above: I can already tell how much my neck will hurt from playing this game.

The Wraith and the Spectre represent Eve: Valkyrie’s fighter and heavy classes, respectively. CCP Games hasn’t revealed a third class of ships yet — a support role that’s kind of like a healer — but it still has plenty of time left before the game releases next year. It’ll launch alongside the Rift in the first quarter of 2016 and with the Morpheus whenever Sony decides to release its headset. The developer is currently holding a closed pre-alpha test with people who already own a Rift developer kit (the now-outdated DK2 headset).

The Reykjavík, Iceland-based CCP Games was one of the first developers to contribute to Oculus VR’s 2012 Kickstarter campaign to construct the first Oculus Rift prototypes. A small team of CCP devs got their hands on those dev kits and worked on a side project called Eve VR. The demo became more polished and sophisticated as Oculus VR released better kits and headsets every couple of months. Eventually, CCP Games decided to turn Eve VR into a real game and renamed it to Eve: Valkyrie in fall 2013.