LOS ANGELES — At the Electronic Entertainment Expo (E3), many publishers try to grab your attention with flashy booths, large television screens, and pulsating music. But sometimes, the best stuff are hidden, tucked in a corner away from the noise. One of those games and my personal favorite of the show was Eve-VR.

In truth, Eve-VR is more of a prototype than an actual game ready for release, but it’s already an incredibly immersive experience. The space-combat simulator by developer CCP Games uses the Oculus Rift, the popular virtual-reality headset created (and successfully funded on Kickstarter earlier this year) by Oculus VR.

After I strapped the goggles to my noggin, I was immediately transported to the cockpit of a ship. By tilting my head, I could see my virtual hands and feet resting next to a high-tech computer console. But I didn’t have much time to acclimate to my new surroundings before the ship launched into cold space.

With the Rift controlling my point of view and an Xbox 360 controller handling the ship’s thrusters and guns, I dove into an awe-inspiring dogfight between large space cruisers, with lasers and missiles attacking from every direction. The goal is simple: Destroy as many of the other players (who are sitting next to you in the booth) as you can. I died a bunch of times and only shot down two enemy ships, but that’s okay. I was too enamored with virtual-reality space flight to care about my kill-death ratio anyway.

It’s only a hobby … for now

The Eve-VR demo I played is only 7-weeks-old. It’s the same version that was shown during CCP’s annual Fanfest event in Reykjavik, Iceland. The team behind it consists of just 10 people — none of them work on it full-time. CCP allows its employees to dedicate 20 percent of their work time to side projects such as Eve-VR. 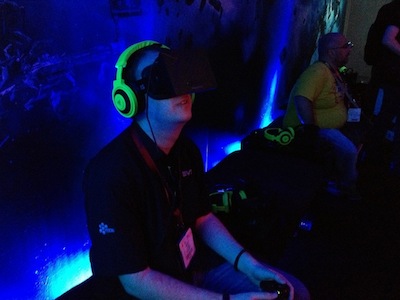 “We all have other responsibilities,” said Sigurdur G. Gunnarsson, one of the developers behind Eve-VR. “Like based on the [business] card I gave you, I’m actually a senior web developer. I work on one of the back-end web servers for Dust. We all have different jobs.”

As much promise as the prototype has, Gunnarsson, his team, and CCP Games are still trying to figure out where Eve-VR can fit in the universe shared by Eve Online (its 10 year-old massively multiplayer online game) and Dust 514 (a first-person shooter for the PlayStation 3). Both of those games are intricately connected. In addition to shared factions and alliances, Eve players can send down laser strikes from above to kill Dust mercenaries on the planet below them.

“It’s kind of complex because [it’s] the Eve universe, so we have to figure out where [Eve-VR] can fit in,” said Gunnarsson. “With Dust, it’s actually really nice because it works with the planets. But in like Eve, it’s the rest of space — where are you gonna fit this without disturbing the normal Eve gameplay?”

Above: You have to keep your head on a swivel: enemy players are all around you.

With its dark, moody lighting and monitors showing off massive spaceships, developer CCP Games’ E3 booth felt a lot like walking into Disney’s Tomorrowland park. A handful of kiosks displayed the latest updates for Eve Online and Dust 514, showing what CCP has accomplished. On the other side were a row of Oculus Rift headsets — just one way that the Eve universe may grow in the next few years.

This ongoing expansion isn’t limited to games, either. A TV show based on the adventures of real Eve Online players is in development — stories that CCP will also use for an upcoming graphic novel.

As for the future of Eve-VR, Gunnarsson remains optimistic about its role in Eve’s “second decade,” a term CCP uses to describe its years-long plans for the Eve-related games.