Hearthstone: Heroes of Warcraft has been out on iPad for a week, and already it’s one of the top-downloaded apps in Apple’s App Store.

The digital collectible card battler has already impressed on PCs and Macs, becoming a new free-to-play bonanza for publisher BIizzard Entertainment, a subsidiary of Activision. And with analysts predicting that it and the publisher’s free-to-play online strategy game Heroes of the Storm could rake in up to $200 million in microtransactions this year alone, nailing the mobile port was key.

But how do you port a game to a platform you’ve never made a game for before — one that’s vastly different and uses devices that are far less powerful than those that run Diablo 3 or StarCraft II?

You turn to Unity, the game-design toolset that can handle just about any platform you throw at it — console, PC, mobile, or browser. When they first showed off Hearthstone on the iPad recently, production director Jason Chayes and producer Bryan Chang (who both have their 5-year swords with the company) touched on Blizzard’s first foray into mobile gaming. Here’s an edited transcript of our interview.

GamesBeat: How challenging is it to nail touch controls for a game designed for a mouse interface? 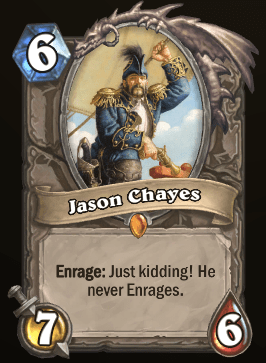 Above: Hearthstone production director Jason Chayes even has his own card, which you can find in the credits.

Jason Chayes: We kinda halfway through development — a little earlier even than that — we felt Hearthstone would be a good match with the iPad, so we did make some decisions as we went to try to be very conscious of what the controls would be like on the iPad, and that actually helped to make sure that when we release that it would feel like a very natural experience. There definitely was some custom work we had to do to bring it to the iPad.

For example, how Battlecry mechanic works as a mechanic — something where you’re dragging the mouse on the PC and targeted another card — didn’t work as well when you dragged your finger across the screen to target a card, so we had to think differently, had to turn that a two-step process. But overall, we feel very good about Hearthstone on iPad. We feel like it’s a great experience. We feel like just the idea of dragging cards into play feels very natural. Flipping through pages in the collection manager just by dragging your finger across the page feels great as well. Dragging a pack in the pack-opening screen and having that burst into cards feels great.

I targeted Hearthstone specifically because I thought it would be a great experience on the iPad, and the feedback we’ve received is that it is a great way to experience the game.

GamesBeat: How long have you been at Blizzard?

Chayes: I’ve been there about 5.5 years.

GamesBeat: So you’ve never done an iPad game before?

Chayes: Since I’ve been at Blizzard we’ve been focused on other titles and not on the iPad.

GamesBeat: What’s the greatest challenge in taking a bunch of folk who do PC games and telling them that you’re now doing an iPad game?

Chayes: For us, it’s how do we make sure it hits that quality target. There are different considerations here that we haven’t had to think about in the past. We have very high goals and aspirations for keeping it a Blizzard-quality game, and so understanding what are those changes that are necessary to make to make it feel like a seamless transition to this new platform is one of the biggest things we had to work through.

Bryan Chang: I’m the producer on Hearthstone, focused more on the mobile platform. Been at Blizzard for 5.5 years. We both got our 5-year swords at roughly the same time.

My whole career at Blizzard — actually, my whole career in games — has been in mobile. For Blizzard, I worked on the mobile armory and the mobile authenticator before I joined the Hearthstone team and bringing this to iPad.

GamesBeat: Did Blizzard make all of the tech to bring it to iPad, or did it use any third-party solutions?

Chayes: We are using a game engine called Unity for the development of the game, and Unity does support iOS, which is great, that actually helped bring Hearthstone to the iPad in dramatic fashion, which is great. 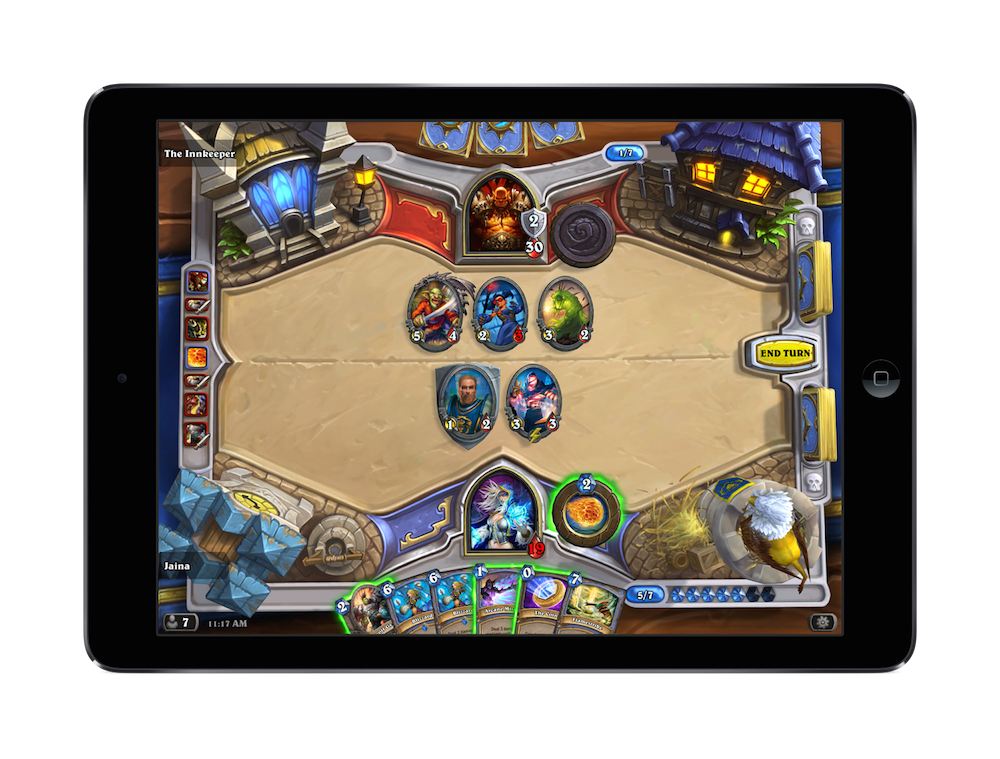 Above: One of the most difficult parts of bringing Hearthstone to the iPad was figuring out Battlecry.

GamesBeat: So, you could port Hearthstone to anything that supports Unity?

Chayes: We want to make sure that the experience is great on all the platforms, but that’s one of the reasons why we did pick Unity to begin with, was because the potential to hit other platforms like that.

Chang: There is a lot of work that went into the mobile .. we didn’t just click the button and it was immediately there like magic. But it did get us a lot of the way there.

Our guys have spent a lot of time making sure that the experience is appropriate for mobile.

GamesBeat: Did you need any third-party software to get Battle.net to work with the App Store for microtransactions?

Chayes: All the Battle.net stuff is largely designed in-house. The Battle.net team that handles all of the authentication flow — you mentioned that the authenticator is getting a lot of that set up, a lot of the social systems we have in our games — so we partnered with that group to do the custom work that was necessary to have Battle.net integrated into the iPad version of the game.

GamesBeat: So all of that is custom stuff.

Chang: You get all of the Battle.net social so that all your friends from all the other games are there.

GamesBeat: What was the biggest challenge in making the social stuff work?

Chang: The hardest part to bring it to the iPad, which is a common thing, was fitting it on a small screen. I’ve spent my life, my whole career, doing this. The challenge was not in the game. When I was brought into Team 5 [the Blizzard group on Hearthstone], they were already playing with Unity, getting to know the dev tools. Bringing it to iPad was not the most difficult challenge — not as big a challenge as shipping a game.

Chang: The fix bug button. It affects all platforms at the same time.

GamesBeat: What are the major lessons Blizzard has learned about free-to-play, especially since this is your first foray into that business model?

Chayes: One of the challenges for us was what sort of game makes sense? We start with the game first and determine the business model later.

GamesBeat: Who wrote the lines for the grinding wheel that spins while Hearthstone is making a match for you?

Chayes: Our UI artist, Derek Sakamoto, has a good sense of humor. He’s the primary driver of those lines. We have fun with games, and Hearthstone is no exception.