Arcades aren’t what they used to be, especially in the West. They’re looked upon as places for retro nostalgia, not where you’ll find some of the most interesting games available. But that’s where Japan has an advantage as some of the arcades are being used to test cutting-edge virtual reality games.

Above: Japan’s arcade business, as measured by its manufacturer’s association.

Arcades, or “game centers” as the Japanese call them, are alive and kicking in Japan as I noticed in my whirlwind visits to Tokyo, Osaka, and Fukuoka last week. Many companies have exited the business as the market for arcades has sagged in the U.S. But in Japan, arcades still occupy a huge amount of real estate. Square Enix’s Taito has more than 138 arcades throughout Japan, and it’s just one of the companies in the business. Square Enix said that arcade sales were $360 million in the year ended March 2016, up 9.7 percent from a year earlier. One of the reasons? Foreign tourists like me.

Instead of being artifacts of the past, these arcades have turned into experimental labs where game companies can test their newest creations in ways that their American counterparts can’t. They’re located in prime real estate in places such as Akihabara, Tokyo’s electronics store district, where it would be ludicrous to operate businesses that consume a huge amount of electricity and don’t make money.

“Since entertainment options have increased significantly over the last two decades, especially driven by the Internet and mobile, many people in Japan predicted a quick death for arcades,” said Serkan Toto, game analyst at Kantan Games. “The market has been shrinking both in terms of revenue and the number of centers over the years. But overall, arcades are still a surprisingly resilient business.”

He said that game center operators have been creative, both in terms of locations and attractions. Many arcades are not standalone anymore but now integrated parts of larger entertainment or shopping complexes, especially in big cities like Tokyo. All told, there are 15,612 arcades, according to a report by the Japanese Amusement Machine and Manufacturers Association.

“Some locations host events or offer other ways to spend time and money, such as themed cafes or restaurants,” Toto said. “Content-wise, arcades have been trying to expand away from single males towards families, females, and also elderly people. The stereotypical arcades with old video game cabinets still exist, but new ones being opened are usually clean, look modern and try to create a more positive atmosphere. The most recent wave are VR experiences that can be enjoyed by a group of people – something that an increasing number of arcades here in Japan are using to lure customers.”

For sure, the arcade business is weaker than it used to be, particularly because PC and console games have become so popular in our homes. Street Fighter V debuted earlier this year, and it was the first major title in the series that did not get released in the arcades first.

But there’s plenty of other bizarre games in the arcades and new games in development. Fans are more than ready to drop 100 yen (about 87 cents) into all the machines. The games generally fall into categories such as fighting, romance, racing, biking, shooting, music, dancing, slot machines, mahjong, horse-racing, prizes, and photo booths.

At an amusement park called Joypolis in Tokyo, Sega has a free-roaming multiplayer virtual reality game called Zero Latency VR. In this game, players occupy a warehouse-like physical space. They wear VR headsets and hold guns with light sensors on them. They have to fend off zombies that attack the space from all directions. Sega’s PR folks say that the place is always packed full on weekends, even with sessions that cost $10 per visit.

Masaru Ijuin, the technical director at Capcom, told me at Canadian game event that his company is experimenting with different ways to do VR. In one location in Tokyo, Capcom has created a Kaiju, or giant monster, simulator. You act as a Kaiju and stomp through buildings in a 25 feet by 25 feet space. It’s like you’re Godzilla, raging through Tokyo with touch controllers in your hand. You can stomp with your feet (with touch controllers attached to them) or your hands, all the while viewing a cartoon-like city where you can tear apart buildings and pull helicopters from the sky. Your job is to save the little Kaiju. 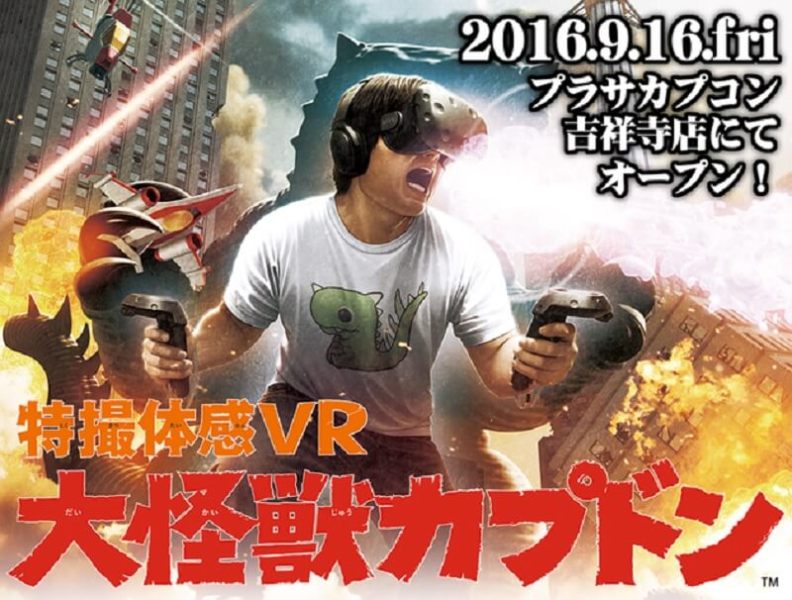 Ijuin said that the experimentation, such as one horror VR demo called Kitchen, has proven useful. In that game, you are tied to a spot in a kitchen, and you have to listen to 3D audio cues to figure out the direction that creatures are coming at you. It’s not a full game by itself, but will prove to be a useful part of an upcoming VR experience.

These kinds of games are going to be in high demand in places such as South Korea’s PC Bang cafes and China’s internet cafes. Many of those cafes are being retrofitted for location-based VR entertainment. HTC plans to open 10,000 such VR arcades in China alone. 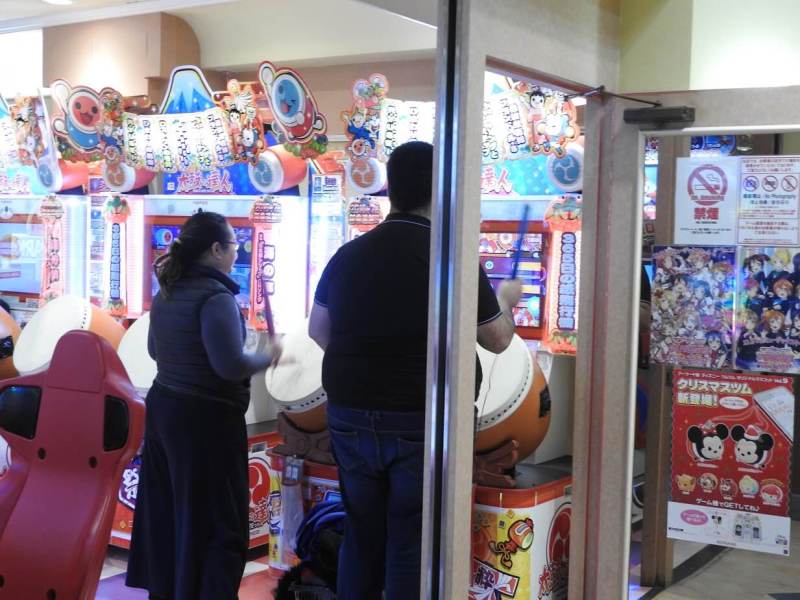 I was struck by the variety of games in the huge arcades that I visited. At a giant Namco arcade in Fukuoka’s main train station, I played Taiko Drum Master (Taiko no Tatsujin in Japanese) with Akiko Onozuka, a Canadian diplomat who was my guide in Japan. We had to pound on the drums with wooden sticks and hit the sides. It was like Guitar Hero, except you had to pound the drum at exactly the right time. The title was more than a decade old, but I’ve never seen anything like it in the arcades I’ve frequented.

I did OK, winning the first round. But Onozuka came back and beat me in the second. Our arms were tired after banging the drums. We didn’t score particularly high, but some of the people who play these games are truly masterful.

The game centers are usually multiple stories high. In the Taito Station game center that I visited in Tokyo, the main floor was a bunch of family friendly games where you use a crane to fish for plush toys. On the floor below were shooter and hardcore games. There were all sorts of games on the upper floors, and at the very top were high-end photo booths such as Katy 2 and the oddly named Cyunt. 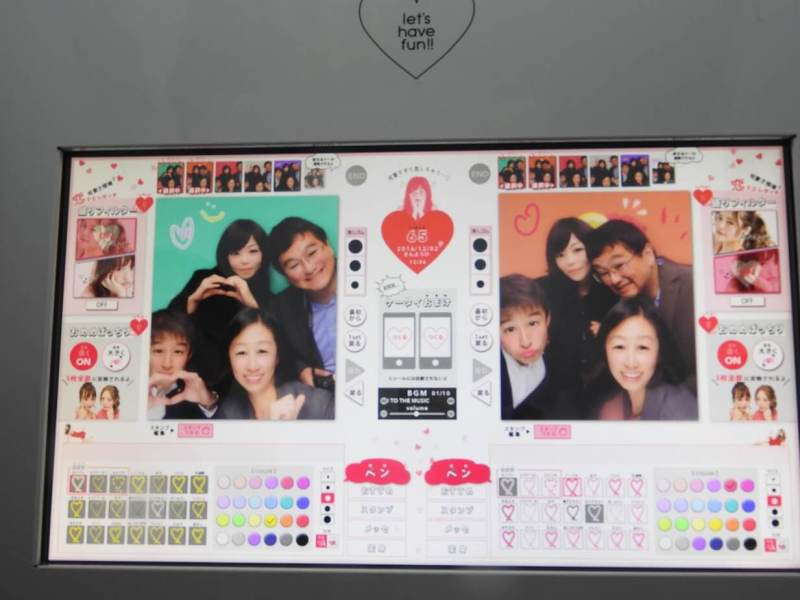 Above: The product of the Cyunt photo booth.

Onozuka and her Canadian government colleagues got me to do the Cyunt photo booth. I thought it was one of those weird girlfriend simulators.

At first, we had to look at a mirror to see if we looked presentable. Then all four of us went into a photo booth and snapped pictures with funny poses. Then the computer took our image and gave everyone funny faces, making us all 20 or 30 years younger. We all now had colorful lipstick and rosy cheeks. The computer also made our eyes bigger, like with anime characters. Then we could add a bunch of writings and stickers to the images before we printed them out. 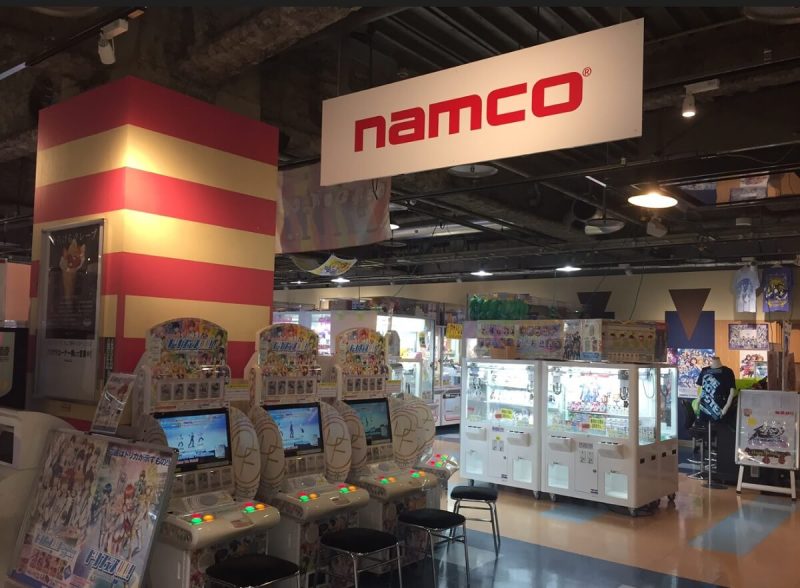 Above: A big Namco arcade at the Hakata train station in Fukuoka, Japan.

Some of the contrasts with Western arcades are comical. The classic Jurassic Park arcade game is a bloody affair in the U.S. But in Japan, you shoot the dinosaurs with tranquilizer guns and cart them off to a safe place. The phrase “Rescue the dinosaurs” is on the back of the cabinet.

It seemed a little sad to see some of the adult players in the arcades during the day, perhaps playing hooky from work and spending a bunch of money in the arcades. But it was also amazing to see how masterful some of them were.

Here’s a video of a couple of players moving their hands around quickly in a session during the middle of a work day.

And here’s a video of a super-fast arcade player. I hope to be as good one day.

And below is our photo gallery of Japanese arcade games.