I thought robots made my life easier. Then I played Choice of Robots.

I’m not pointing any fingers here, but in developer Choice of Games’ interactive-fiction game, I got involved with building robots and then bad things happened. Sure, I enjoyed moderate to incredible fame and wealth for a while, but then my funding money ran out and I may or may not have helped trigger a world war between humans and robots in which the Chinese kicked our flesh and metal butts.

That’s just one outcome in Choice of Robots, a 300,000-word playable sci-fi novel for Steam, iOS, and Android where all you have is a story and a choice. Quite a few choices, actually. No frills such as graphics or music are there to distract you.

“You could call it a life sim, vaguely similar to The Sims or Princess Maker,” said Kevin Gold, the author of Choice of Robots, in an email interview with GamesBeat. “The game that Choice of Robots is most closely patterned after is Alter Ego, a quirky 1986 game in which you play out a whole life from womb to tomb. I remember getting a chill when I died of old age in that game, and that epic whole-life experience is what I was shooting for.”

Because of his Ph.D. in computer science, you could say Gold is qualified to lead you through a story about robots from all angles — designing and constructing them, deciding what intelligence to give them, talking to the media about your amazing creation, side-stepping (or aiding) presidential candidates and the military, and so forth. Choice of Robots takes you through every possibility while keeping careful track of your relationships, both social and romantic, and how well you’re doing as a friend, lover, roboticist, and businessman.

“A typical playthrough has about 100 choices, which puts the number of possible run-throughs at at least 3^100, since there are almost always at least three options,” said Gold. “There are seven chapters in each playthrough, and until the sixth chapter, the narrative usually wanders back to join the other streams by the end of each chapter. Then that sixth chapter, the climax, can take one of four very different forms, and chapter seven is like an epilogue. There are 38 final sentences, but the endings are all heavily flavored by the things that came before.”

If that sounds complicated, it is — or was for the developers, anyway. All the player has to do is decide what action to take as they play through the story, but the work was a lot more intense for Gold and Choice of Games. 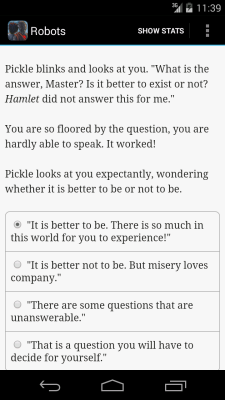 Above: Choice of Robots on Android phones.

“It is really, really difficult to keep all the paths in your head at the same time,” he said. “Beta testing revealed a few places where dead characters could speak, just because I forgot there was a way to reach that point with that character dead. But in some cases, I can create an illusion of remembering everything by sprinkling the narrative with little callbacks. The dreams at the beginning are referenced throughout partly because they’re the earliest choice, and reminding the player that you remember that choice suggests you’re really keeping track of everything. It’s an illusion, though, and much of the game is written to work with a variety of paths that have come before.”

As the player makes choices, the game adjusts the various stats (such as humanity, empathy, and relationships with the characters) as they go along. “The main character is always someone who’s still working on remembering to live a real human life in addition to making robots, which comes more naturally,” said Gold. “The game’s also supposed to give the impression that fame and wealth are ultimately a little pointless — most of the game was written while I was on a Stoic philosophy kick.”

Because every choice can steer the story in a different direction — any one of those 3^100 combinations that Gold mentioned — they carry huge meaning. In other games, that might not be the case. Gamers haven’t always been too happy about how light the connection between choice and consequence can be in games like BioShock or Mass Effect 3. 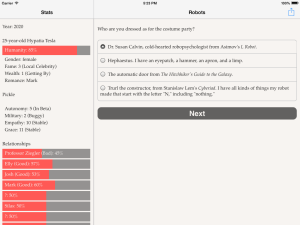 Above: How would you dress for a nerdy costume party? I totally went as the automatic door.

Choice of Robots touches on a number of social issues that are or were relevant at one time: human-robot marriage is strikingly familiar, as is the fear of American job loss to robot workers. And while playing, I was surprised at how much I cared for my robots — and how much they taught my character about life. But that doesn’t mean Gold is trying to influence the player’s feelings either way. Your robot can be good (with divine empathy) or evil, after all.

“Ira Glass was once asked what civic outcome he was trying to accomplish with a particular story on [radio and television show] This American Life, and he said, ‘It’s hard enough to be entertaining.’ That’s more or less my position with Choice of Robots,” said Gold. “But part of being entertaining can be being philosophical or educational, and I try to be a little of both of those throughout. But I wouldn’t say I’m trying to convince the player of anything. It’s hard enough to be entertaining.”

Not every choice is serious just because it has an impact on the story. Humor is a big part of Choice of Robots, too.

“I think my favorite set of choices in the game are the ‘education’ choices, specifically the path where you educate your robot with video games,” said Gold. “I cackled out loud when I wrote the bit where your robot can get different endings of Civ IV depending on its stats.”

Gold clearly had fun while writing Choice of Robots, but he’s surprised by how well it’s doing on Steam when gamers can grab Portal 2 for a similar price.

“Who doesn’t want a personality test maze novel? That sounds like fun to me.”