VR is going through its trough of disillusionment at the moment, but Everest VR could very well break even on its investment, said Thor Gunnarsson, cofounder and head of business development at Sólfar, in an interview at the Casual Connect Europe event last week in Berlin. Adding the new platform will be a big help in heading toward profitability, as VR experiences have a long tail in terms of demand, he said.

“We’ve tried hard to manage our time and expectations to match the opportunity in the market,” Gunnarsson said. “The long tail demand has been pretty steady. We’ll breakeven on the project from an investment perspective. The goal for every VR company in 2017 is ‘Don’t die.'”

Sólfar’s Everest VR has some stunning new content, including a Lhotse Face sequence and an expanded version of the experience’s “God Mode” with a documentary-style look back featuring historic photos from the first successful summit of Everest. 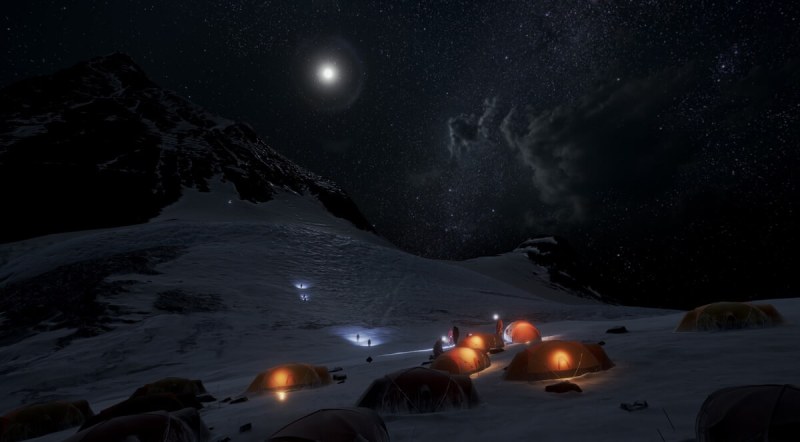 Above: Everest VR base camp at night.

You explore the treacherous landscape of Mount Everest in a first-person experience. It debuted August 2016 as an HTC Vive exclusive, the experience is now available to purchase via Oculus Home for $15. It supports the Oculus Touch controllers.

The Reykjavík, Iceland-based Sólfar worked on this VR experience for about nine months with a team of 12 people, Gunnarsson said.

“Our team has worked tirelessly to optimize Everest VR for Oculus Rift,” said Kjartan Pierre Emilsson, a cofounder and CEO of Sólfar Studios, in a statement. “We’ve made numerous content updates to ensure that users have the most visually accurate experience of ascending Mount Everest. We’re particularly proud of the addition of the 1953 Hillary expedition photographs to the experience, which brings an entirely new documentary lens to the experience of being on the mountain in VR.”

Gunnarsson said that it was challenging to launch the original on Steam VR in part because there wasn’t yet a category for non-game experiences. Some people expected a game, even though the company tried to fully describe Everest VR as a climbing experience.

The journey includes notable milestones and interactive events from Base Camp, the Khumbu Icefall, Hillary Step, Lhotse Face, and the ascent to Summit, as well as a ‘God Mode’ that offers sweeping views of Mt. Everest and the surrounding mountain ranges at scales ranging from 1,5000-x to 1-x resolution. You can teleport all around the mountain range.

Above: Everest VR takes you places you wouldn’t go in real life.

With the debut on Rift today, explorers can follow 18 different historical expedition routes, including the 1953 British Expedition when Edmund Hillary and Tenzing Norgay made the first successful summit of Everest. Following the Hillary Expedition in God Mode, users can view along the route a collection of stunning high resolution color photographs from the 1953 expedition, often presented in the actual position where the photograph was taken at the time. This collection of documentary material is courtesy of the Royal Geographical Society (with IBG) in London, which holds the largest collection of Everest related material in the world.

“You get the same perspective that the photographer had in 1953,” Gunnarsson said.

In order to create this photorealistic experience, Sólfar Studios and RVX pieced together tens of thousands of high resolution images of the mountain range using advanced stereo-photogrammetry techniques and multiresolution shading to create a definitive CGI model of Mount Everest.

Gunnarsson said that climbers are starting to use the Everest VR experience to plan their own expeditions.

“They believe digital cartography is the most accurate way to do expedition planning,” he said.

Gunnarsson said it was not a trivial task to redo the textures for a 90-frames-per-second experience in VR. The experience was built on the Unreal Engine 4, providing a level of authenticity and visual fidelity that pushes the envelope of real-time graphics.

The minimum required specifications to enjoy Everest VR on Oculus Rift are a Windows PC with 8GB RAM, an Intel i5-4590 or greater CPU, an Nvidia GeForce GTX 960 or better or an AMD 290 or better GPU.

As for the future, Gunnarsson said it will be a “slow burn” for VR to gain more popularity and traction.

“We don’t have our killer app yet,” he said. “We need our Super Mario for VR. I think it will come.”