Yesterday, Patreon sent out an email about changes it’s making to its pledge system. The membership platform enables fans to become “patrons” and support creators directly by committing to tiers of payment starting from $1. Creators are currently responsible for payment processing fees, which range from 2 percent to 10 percent and come out of their cut of each pledge. However, starting on December 18, those fees will be transferred to patrons instead.

In addition to the transaction fees coming out of pledges, Patreon also takes 5 percent. After factoring in processing fees, creators typically take home 80 percent to 88 percent of each pledge. In the new model, creators receive 95 percent of money pledged, Patreon continues taking 5 percent, and patrons are responsible for paying 2.9 percent plus a $0.35 fee for each pledge they make. 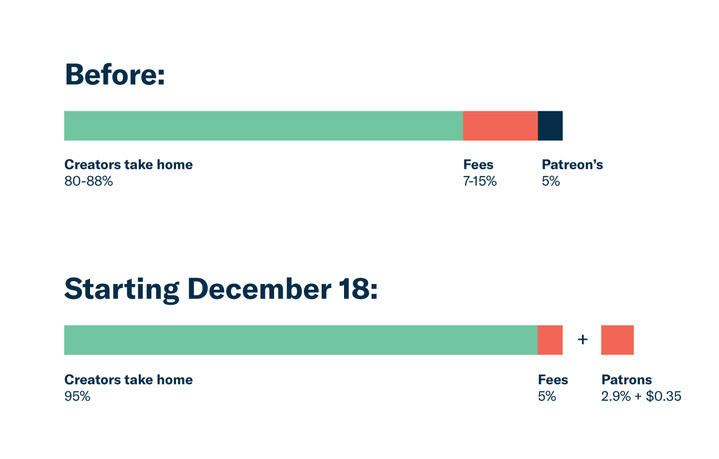 Above: Patreon’s chart for how the new fee structuring will work.

The backlash on social media to this new structure has been swift. Many creators are saying it’s unfair for patrons to have to pay transaction fees. In addition to that, most people support multiple creators and not just one, and they’ll have to pay the extra fee for each pledge they make.

“I understand why [Patreon] would want to make the amount that creators receive more apparent, but the way they’ve went about it feels like they’re going to make more money on the flat fees they’re charging patrons for each transaction than the 5 percent cut they take from creators,” said indie developer George Buckenham in a chat conversation with GamesBeat. “Which feels bad?”

“This especially disincentivizes people pledging single dollars per month to multiple creators, which I assume they factored in and are happy with, in favour of people backing fewer projects for larger amounts of money,” said Buckenham.

Though Buckenham hasn’t seen his number of patrons diminish, other creators have posted screenshots of people deleting their pledges. The 2.9 percent and $0.35 fee might not seem like a big deal, but it can add up when multiplied, making the difference between whether someone pledges or doesn’t.

With over $30 in dropped pledges today after the news from @Patreon about fees-per-pledge, I’m not feeling any upside here.

This Patreon change is complete garbage. @GameHistoryOrg lost 5 today so far, which is huge when you're only in the 200s, and to be honest I'm so furious at what they're doing to my backers that I hope it doubles. pic.twitter.com/gRQ0eW6aS1

“The $1 tier is not the largest part of my revenue on the service, but also psychologically it feels important?” said Buckenham. “It’s what people back at when they want to support you, but maybe don’t have as much money to spare. So I definitely appreciate those pledges as much as those at a higher amount. That feels like a part of Patreon to me, and I guess a part they want to move away from, or don’t appreciate.”

To offset the cost to patrons, some creators are restructuring their own tiers. One user, Boozy Barrister, posted an explanation of how he’s moving things around so that even with the new processing fees, patrons will still be paying close to their original donations.

“Essentially I took the reward level and futzed around to get the payment, with the 2.9 percent processing fee and the $0.35 service fee, as close to the amount the rewards were previously at,” he writes in a post. “This means your total donation amount shouldn’t change. The $5 tier, for instance, is now $4.51, which when you add in the 2.9 percent processing tack on and the $0.35 service charge patrons are hitting, evens out to a penny under $5.”

However, because pledges have to be $1 at minimum, those who opt for that tier will still end up paying the new fees.

Creators like Frank Cifaldi, who runs The Video Game History Foundation, says that putting the burden on patrons is the worst part about the reworked pledge system. The VGHF is a digital library that aims to archive important information about video game history and culture. Its patrons are in the 200s, and after Patreon’s announced change, it’s already lost five subscribers.

And Cifaldi expects it to get worse.

“What’s most upsetting to me about this change is that it punishes Patreon’s poorer contributors,” said Cifaldi in an email. “We’re a public charity, and we don’t offer any perks below the $5 tier, so the $1 and $2 donors we see every month are doing so purely out of kindness. These are people who have faith in what we’re doing and want to help in whatever way they can, even if they don’t get anything out of it. To suddenly pull the rug out from underneath them breaks my heart. Those $1 tips are votes of confidence in what we’re doing, and I would have much rather kept them and eaten more fees.”

Because of the new fees, some indie developers are now reconsidering using the platform. James Earl Cox III creates small games — 100 of them, in fact, in five years — and also cofounded the two-person studio Seemingly Pointless, which developed the award-wining interactive fiction game You Must Be 18 or Older to Enter. He’s uncomfortable charging players money for short, individual works, so he was considering setting up a Patreon. However, the revamped pledge structure has given him pause.

“Patreon was attractive as it supports creators as a whole and felt like a great way to navigate this conundrum: I wouldn’t have to charge for a single 5-minute-or-less game but could still allow people to donate to me if they wished,” said Cox in a chat conversation. “The new changes (in their current form) would stub the small donations I’d ask for. To me, the patron-artist relationship embraces goodwill and a feeling of contributing to art. So losing [35 percent or more] of a small $1 donation could chip away at participants’ goodwill.”

He added: “I never expected to subside off of Patreon. Rather, I wanted to use it as a platform to embrace supporters and grow confident with asking for donations for experiments. But with GameJolt’s and Itch.io’s open revenue sharing, I feel more comfortable giving to these host sites than to Patreon.”

Still others, like indie developer Clarissa “Maruki” Picolo, say that they may decide to leave Patreon altogether. Picolo is the co-founder of Brazilian game studio Lostalloy, which is currently developing the Zen ghost game Aftertile. She says she actually designed her tiers to favor patrons who are contributing $1, but because the fees make it more expensive for her supporters, she might just take donations through her website instead.

“This decision affects heavily the patrons that contribute just a little (from $1-$5), and they happens to be the majority — hence, artists will lose quite a chunk of their fanbase that gives financial support,” Picolo said in a chat conversation. She added, “Overall, I’m considering going back to the roots by adding a ‘donate’ button on my Tumblr/website and installing a comments field session on my Tumblr, so it can be more similar to Patreon’s interface, and carry on with posting my content there,”

Patreon maintains that the new structure is to ensure creators can have a stable income. Its reasoning is that creators can now reliably expect 95 percent of base pledges without unpredictable payment processing fees. And it updated its initial announcement with additional explanations, noting how complicated the current system is and how creators have been unhappy with numerous and expensive charges because of various processing fees throughout the month.

“We are having lots of conversations with creators, and we encourage creators who want to talk to us or learn more to reach out,” said Patreon head of communications Mollie Starr.

Comic artist and illustrator Caytlin Vilbrandt posted a poll earlier today asking, “Patrons: How do you feel about this?” At the time of publication, a majority of responders have said they’re upset by the new system. 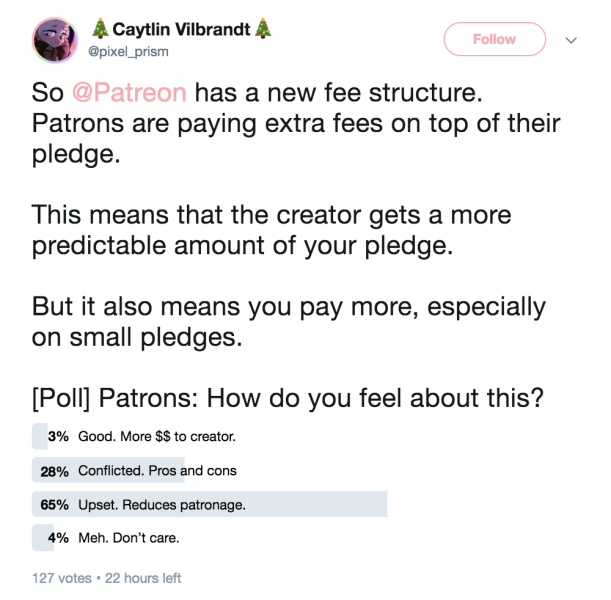