Microsoft showed off a bushel of upcoming games today at its Xbox event ahead of the Electronic Entertainment Expo (E3), including a longer look at Bethesda’s anticipated Fallout 76 and CD Projekt Red’s Cyberpunk 2077. It also highlighted a few indies, such as the adorable fox action adventure Tunic and Studio MDHR’s punishing run-‘n’-gun Cuphead, which is getting new DLC next year.

Here’s everything that took the stage at the Xbox event:

343 Industries is back with Halo Infinite, which will feature idyllic landscapes powered by the new Slipspace Engine. Xbox boss Phil Spencer describes this as Master Chief’s greatest mission yet.

Moon Studios shared another trailer for its upcoming Metroidvania, Ori and the Will of the Wisps. It was announced at last year’s E3, and it follows the indie darling Ori and the Blind Forest, which debuted in 2015.

Samurais fight against ogre-like creatures and other enormous monsters in From Software’s Sekiro: Shadows Die Twice, a game that looks like it’s taking cues from the Dark Souls series. 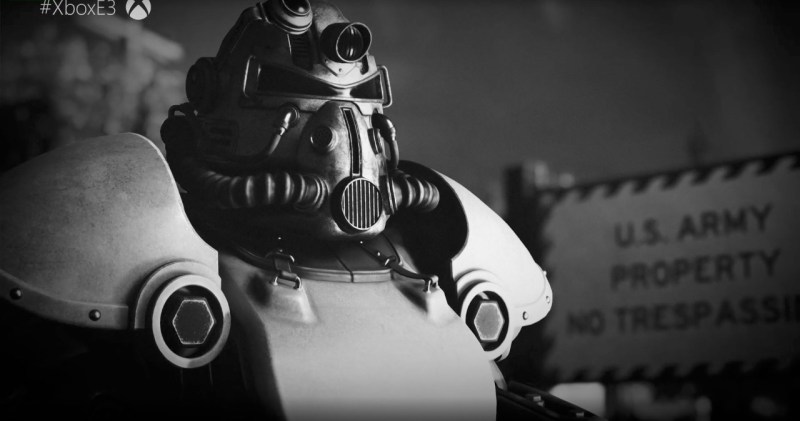 Bethesda showed off a longer trailer for Fallout 76, which will be a prequel to all other Fallout games that’s four times the size of Fallout 4. “Set in the hills of West Virginia, you are the first to emerge into an untamed and very different wasteland,” said Bethesda game director and executive producer Todd Howard on stage.

The Awesome Adventures of Captain Spirit

Dontnod Entertainment‘s The Awesome Adventures of Captain Spirit dives into family drama and childhood imagination. It’s set in the Life Is Strange universe, and it will be available on June 26.

Terry Crews got some screentime at Microsoft’s E3 event again in the Crackdown 3 trailer, though unfortunately the game has been delayed to February 2019.

Above: Nier: Automata comes to Xbox One with its Become As Gods edition.

Yoko Taro’s heart-wrenching android adventure Nier Automata sold over 3 million copies on PC and PlayStation 4 — and it’s coming to Xbox One on June 26.

The cold never bothered Kingdom Hearts III anyway — the Square Enix/Disney mashup extravaganza is getting a level from the hit movie Frozen. At an orchestra performance last night, the developer announced that the game will be coming out on Xbox One and PlayStation 4 on January 29 in the U.S. and January 25 in Japan.

Rare Games has four teams dedicated to Sea of Thieves content, and it showed off two of the upcoming expansions — Cursed Sails and Forsaken Shores.

Playground Games’ Forza Horizon 4‘s roads will take players through the idyllic British countryside, and it will feature a shared open world and dynamic weather. It revs up on October 2 for Xbox One and Windows.

Compulsion Studios’ We Happy Few got a new story trailer, showing off a dystopian U.K. where resistance fighters struggle against a sinister government that forces its citizens to take Joy, a drug that warps people’s perceptions and dulls their emotions. The trailer came right after Microsoft announced that it had acquired the studio.

PlayerUnknown’s Battlegrounds is getting a snowy new map this winter. The battle royale has reached over 5 million players since it launched on Xbox One in December.

Bandai Namco’s Japanese role-playing game series has sold over 16 million copies since it launched its first title, Tales of Phantasia, in 1995. Tales of Vesperia is the 10th entry in the series, and it will be out on Xbox One this winter.

The Division II is all about surviving a postapocalyptic Washington, D.C., and taking out marauders. Ubisoft showed off a trailer along with some gameplay for the upcoming sequel, which will be out on March 15 in 2019.

Eidos Montreal’s new trailer focused more on Lara Croft’s emotional journey as she tries to prevent the Mayan apocalypse in the upcoming Shadow of the Tomb Raider, which will launch on September 14.

Crea-ture Studios’ Session kickflips onto the Xbox One as a console exclusive. The skateboarding sim game originally raised funds on Kickstarter in 2017.

The massively multiplayer online role-playing game Black Desert will enter beta on Xbox One this fall. Previously, it was only available for PC players.

It’s been 10 years since the last Devil May Cry, and Capcom director Hideaki Itsuno seemed excited to be back in the mix. Devil May Cry 5 shows Nero with a makeover — like a robot arm, for one — but the spirit of the game seems to have stayed the same: It’s all about hacking and slashing at demons.

Andrew Shouldice’s adorable action adventure Tunic still doesn’t have a release date, but it does have a new charming trailer that shows off its world and its perils. Originally titled Secret Legend, Tunic follows a cute fox who explores the worlds and fights creatures in ruins.

Bandai Namco’s Jump Force is a fighter featuring anime characters from the most popular series, like Dragon Ball, Death Note, One Piece, and Naruto.

Techland’s survivor horror game Dying Light 2 pits players not only against zombies but other humans.

As though 2018 weren’t divisive enough, Battletoads is coming in 2019 to wreck friendships and ruin relationships with three-player couch co-op.

Studio MDHR’s Cuphead is getting an expansion: The Delicious Last Course, which will release in 2019. Along with new levels and bosses, folks will be able to select Ms. Chalice as a new playable character.

Just Cause 4 is out on December 4, and a new trailer showed off plenty of explosions and one-liners.

Gears Pop is a mobile game slated for release in 2019. It’s created in a partnership with Funko, and the characters are styled in that signature figurine style.

Gears of War 5 is also coming next year for PC and Xbox One, and it will follow Kait as she tries to puzzle out the meaning behind her dreams. Both local and online co-op will be available.

The turn-based strategy game Gears Tactics is the third title based on the franchise that got a reveal at Xbox’s E3 event. It’s also the first Gears game designed specifically for PC gamers.