It may not surprise you to know that Ubisoft’s presentation at the Electronic Entertainment Expo in Los Angeles included its annual, lengthy musical tie-in to its annual Just Dance franchise. But we also got updates on its popular shooters and time-stabbing Assassin’s Creed franchise. So it wasn’t just dancing.

Fans who are low on time or just wanted to skip the talking and get straight to gameplay footage and trailers can check out all of our coverage from the event below.

After the dancing stopped, Ubisoft gave people what they came for with some new info on the long awaited Beyond Good & Evil 2. A cinematic trailer revealed that the protagonists of the original game, Pey’j and Jade, were making their return, but the latter may not be as heroic as we’re used to.

We also discovered that the developer is teaming up with Joseph Gordon Levitt’s collaboration platform Hit Record to bring fan-created content into the game. 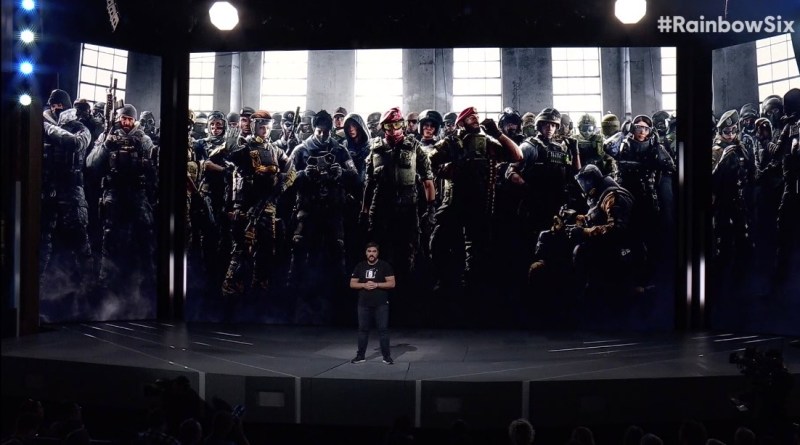 The creators of the squad-based shooter announced that the game has brought in over 35 million players.

We got a look at the next entry in the skill-based motorbike racing series. Trials: Rising will be out in February 2019.

The postapocalyptic team shoot-and-loot title is getting a major upgrade for the sequel: eight-player raids. The developer also showed off a snapshot of the upcoming seasonal content, all of which will be free.

We already knew that Donkey Kong was coming to help Mario and the Rabbids take turns fighting evil. But now we know when. The expansion DLC will launch June 26.

Fans of pillaging found out where they’ll be setting sail. The online pirate sim will take place in the Indian Ocean. Buccaneers will get their shot at all the treasure their holds can carry next year.

This creepy, virtual reality title from Ubisoft and Elijah Wood’s production company, Spectervision is coming out this fall to scare players directly in their faces.

Ubisoft’s getting in on making virtual worlds that play with real-world toys with this adventure title. And the Switch version will come with a special bonus. Star Fox and his Arwing will be playable.

For Honor is getting a few notable updates. First, Imperial Chinese armies are coming to join the fight on October 16 in an expansion called Marching Fire. It’s also receiving a 4-on-4 castle siege mode called Breach.

We expected to hear more about how the time-stabbing series would approach its upcoming entry in Ancient Greece, and Ubisoft delivered. Odyssey will let players choose between a male and female hero, and it’s expanding on the shift to role-playing that Origins started last year. We also got a glimpse of a minotaur in the trailer, so it’s possible the series is breaking from the historical accuracy it’s gone for throughout.

Keep checking back for our coverage at E3 all week.