French publisher and developer Ubisoft revealed a ton of new information about its games and services at the 2019 Electronic Entertainment Expo (E3) trade show today. During its annual press briefing, the company talked about the future of Watch Dogs, Assassin’s Creed, and more.

Here’s a rundown of everything Ubisoft showed at the event. Click on the subheads for the full story on each game or announcement. 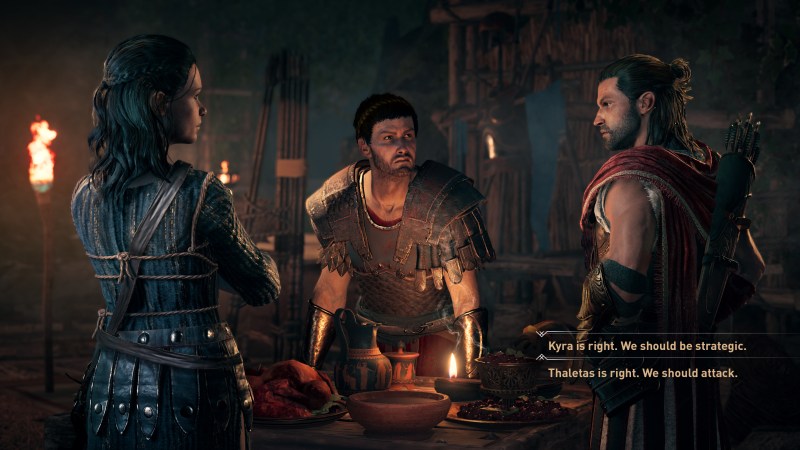 Above: Assassin’s Creed: Odyssey gives players choices throughout its story.

Right before the briefing started, Ubisoft’s pre-show segment made some news when the company announced that Assassin’s Creed: Odyssey will be getting a Story Creator mode and a combat-free Discovery Tour.

The next entry in the open-world hacking series takes place in a post-Brexit London. The big innovation this time around is that instead of playing as just one character (as you did in the first two games), you’ll create and inhabit multiple members of hacker group DedSec.

Always Sunny in Philadelphia star Rob McElhenney took the stage to announce not a game, but a TV show. Mythic Quest is a comedy series about a fictional video game studio known for its massively multiplayer online game, Mythic Quest.

McElhenney is working with Ubisoft to create the show, which will only be available on the Apple TV+ subscription service.

Ubisoft debuted a new trailer for the next season of content for its popular multiplayer shooter.

Adventure Time characters — like Finn, Jake, and Princess Bubblegum — are coming to the free-to-play multiplayer fighting game. Brawlhalla has over 25 million players to date.

The Walking Dead and Punisher actor Jon Bernthal made a surprise appearance to talk about his Breakpoint character Cole D. Walker. Ubisoft also revealed that the beta for Breakpoint will be coming on September 5.

Breakpoint wasn’t the only Tom Clancy-branded game to be at the show. The company revealed that it’s working on a role-playing game for mobile called Tom Clancy’s Elite Squad. It appears that most of the characters come from Rainbow Six: Siege. Just Dance is turning 10 years old this year. The latest version of the hit dancing game is coming to consoles and PC (even on the Nintendo Wii!) this November.

For Honor: Shadows of the Hitokiri

The popular weapon-based brawler is getting a new event.

Ubisoft is working on yet another Rainbow Six game. Unlike Siege however, Quarantine is purely focused on cooperative multiplayer.

Subscription services are all the rage these days, and now Ubisoft wants to get in on the action. The Uplay+ subscription will cost $15 a month, and offer more than 100 downloadable PC games.

Roller Champions is a new free-to-play multiplayer game that kind of looks like a futuristic roller derby league.

Gods & Monsters is a colorful exploration game based on Greek mythology. It’s coming to consoles and PC on February 25, 2020.