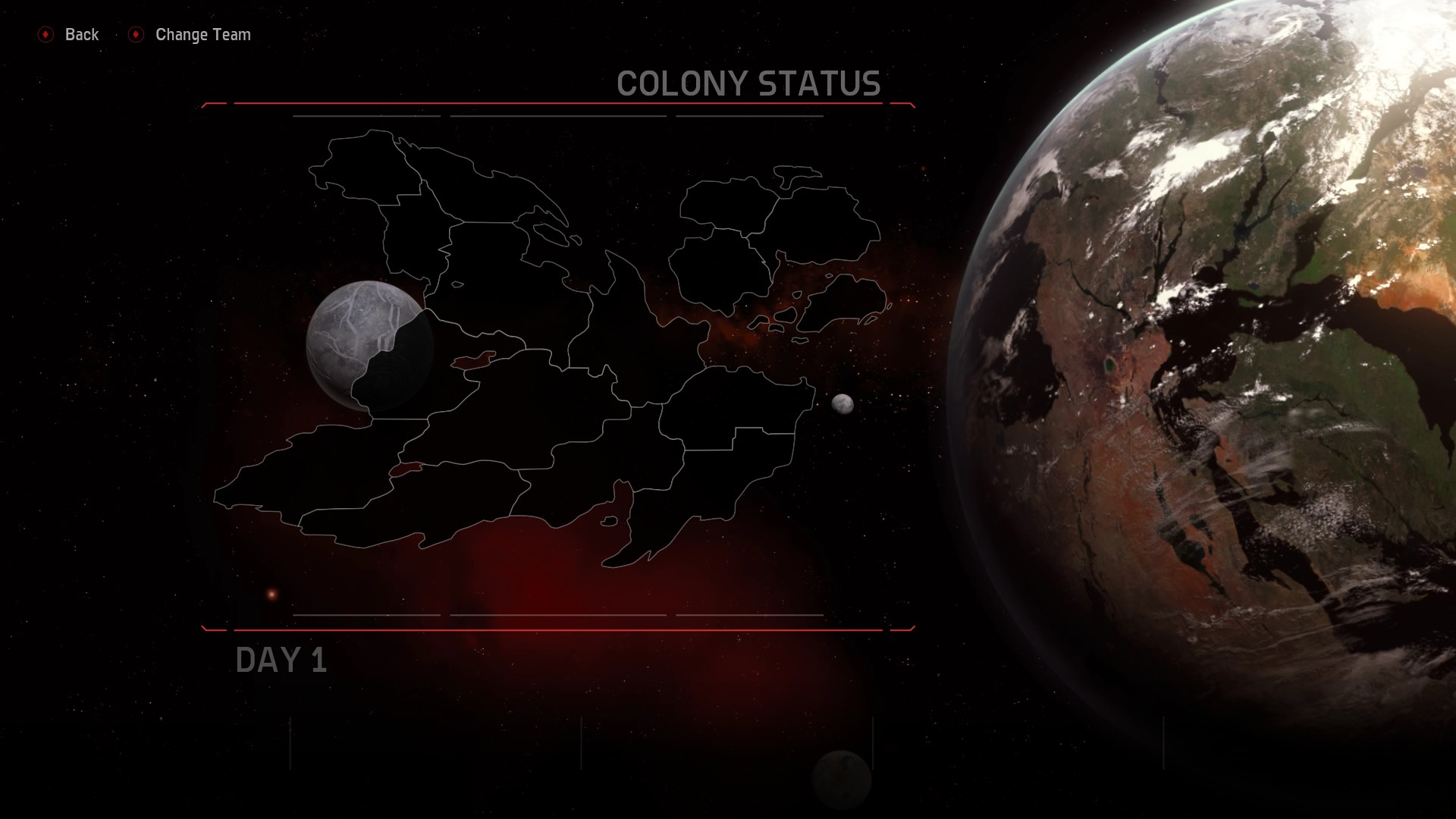 Above: The opening screen in evacuation. Each region represents a different possible mission location.

The evacuation mode is a stroke of genius

I can’t remember seeing a co-op game mode that lives and breathes quite like Evolve’s evacuation.

Evacuation is essentially a five-mission playlist in which either the monster or the hunters are rewarded for their successes and punished for their defeats. Each mission adopts a certain story arc, such as a Shear colony asking for help delivering a shipment of captured animals. This is completely random. If the hunters win that mission, the crew will show its gratitude by giving the team an A.I. soldier or additional turrets to help in their fight. If the monster is victorious, the hunters will be denied that bonus and the captured animals will be set free, giving the beast a more delicious and evolution-inspiring dinner.

Each round also awards a series of powerful bonuses to the loser, giving that person or a team a chance to even the score in the next encounter. The winner is determined at the end of five rounds. If the hunters saved more civilians than the monster killed, they win.

Evacuation mode is truly deserving of the name Evolve. The omnipotent narrator, who provides background information and guides players through tutorials for the characters, said that more than 800,000 perk/detriment combinations are possible throughout the five-round process. Winning teams get the perks, and losing players get the detriment — as well as a hefty bonus to their skills. The result is about an hour of highly competitive and unpredictable gameplay that should carry Evolve to mountainous heights in the hearts of its players.

I don’t normally heap praise or criticism on a game’s sound effects. Music can play an integral role, but the actual noises people, creatures and object make don’t excite me.

But Evolve’s overpowering audio is worth mentioning. I split my review hours between a headset and a modest surround sound setup on my PC, and both auditory experiences were memorable.

It’s loud. It is really, really loud. But the noise level isn’t just for volume’s sake. It creates a thrilling mood, especially when you are playing as a hunter. It is a terrifying experience when a monster leaps at you from its hiding place, and most of the credit for that must go to the wonderful sound work.

Playing Evolve provided a sensory experience similar to that of seeing Jurassic Park in theaters as a 5 year old. I can’t think of a better compliment than that. 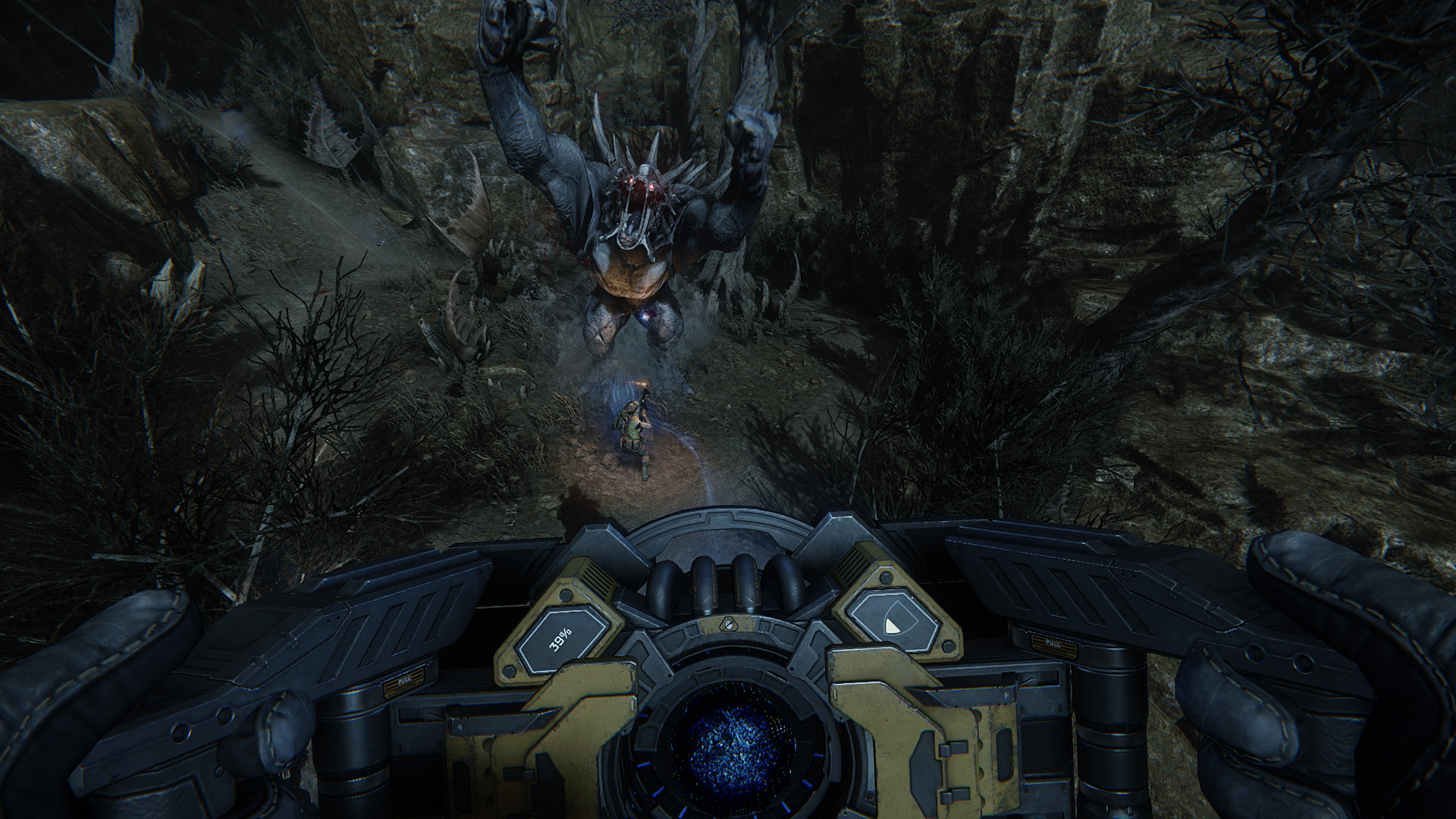 Above: An above-ground view of a hungry monster in Evolve.

I was head over heels for Evolve until I hit a wall at about hour 20. By this point, I had unlocked all 12 hunters. I knew the 12 maps’ various hiding spots and desirable choke points pretty well. Each game played out differently due the human element involved — one new foe, three new teammates — but I couldn’t shake this dreadful familiarity with a game I had only had for a few days.

The truth is that there just isn’t much to do in Evolve right now. Skirmish — a quick, one-game multiplayer queue — only features the hunt game mode. Hunt is a simple kill-or-be-killed scenario — defeat the other team, win a fabulous prize.

Evolve’s other three game modes are basically copies of hunt with one or two variables.

In nest mode, hunters win by destroying monster eggs scattered around the map. Monsters win by killing the hunters or keeping at least one of the eggs intact. Monsters can also hatch their eggs to spawn a strong but stupid minion. Monsters can only hatch one at a time. Hunters must also kill the newborn to win the game. Or they can do what everyone does in every Evolve game at this early stage: Kill each other to end the game.

Rescue mode simply flips this scenario. Hunters must save their own batch of stupid colonists and lead them to various transport points. The hunters win if they save five peons, and the monster wins if it kills five. Or — once again — the teams can kill each other.

Defend mode is awesome. It’s this complicated, timed scenario in which the monster gets a wave of minions every so often and must destroy the hunters base, which consists of three turret-protected generators. I love everything about it, and it requires a drastically different strategy. But it is only available as the fifth and final mission in an evacuation playlist — meaning you have to play at least 30 minutes of the above missions just to get there.

Oh, and the three modes besides hunt are only available in evacuation mode or in a private match. Players can’t just queue up for a quick rescue game.

When I heard that Evolve would have a solo mode, I assumed it would be a cheesy campaign. But the solo gameplay is really just a training option, not a true single-player mode.

It boils down to this: Evolve is fun, but its present state does not deliver the content level expected of a $60 major release from an experienced developer.

One of my biggest pet peeves from the beta tests was how both hunters and monsters got stuck a lot while climbing the many cliffs and buildings that dart Shear’s landscape. I experienced this problem less in the finished product, but the mechanic is still buggy.

Hunters use the jump button for a number of tasks in Evolve. Tapping it executes a basic hop while holding it enables you to jump larger distances or hover for a short time. In theory, holding it also enables you to scale walls. This is where you run into trouble, as it seems to have trouble determining if you want to jump, hover, or climb when you hold the button near a wall. It sounds like a really minor issue, but in a cat-and-mouse survival game where speed and mobility mean everything, the slightest holdup can cost you.

I hate the climbing mechanic even more as a monster. For some reason, players have to press Left Shift to climb as a Goliath on PC (the Kraken can fly, and the Wraith is so fast that climbing is obsolete). As indicated above, my feeble brain can’t handle this extra command — especially given that every other character uses a different button to climb. It seems unnecessary to me. Either stick with the holding jump mechanic (and make that work, please) or designate a climb button for everyone.

In the grand scheme of things, this is a fairly minor issue. Evolve is a great game, but the climbing is definitely a feature that Turtle Rock should continue to improve after launch. 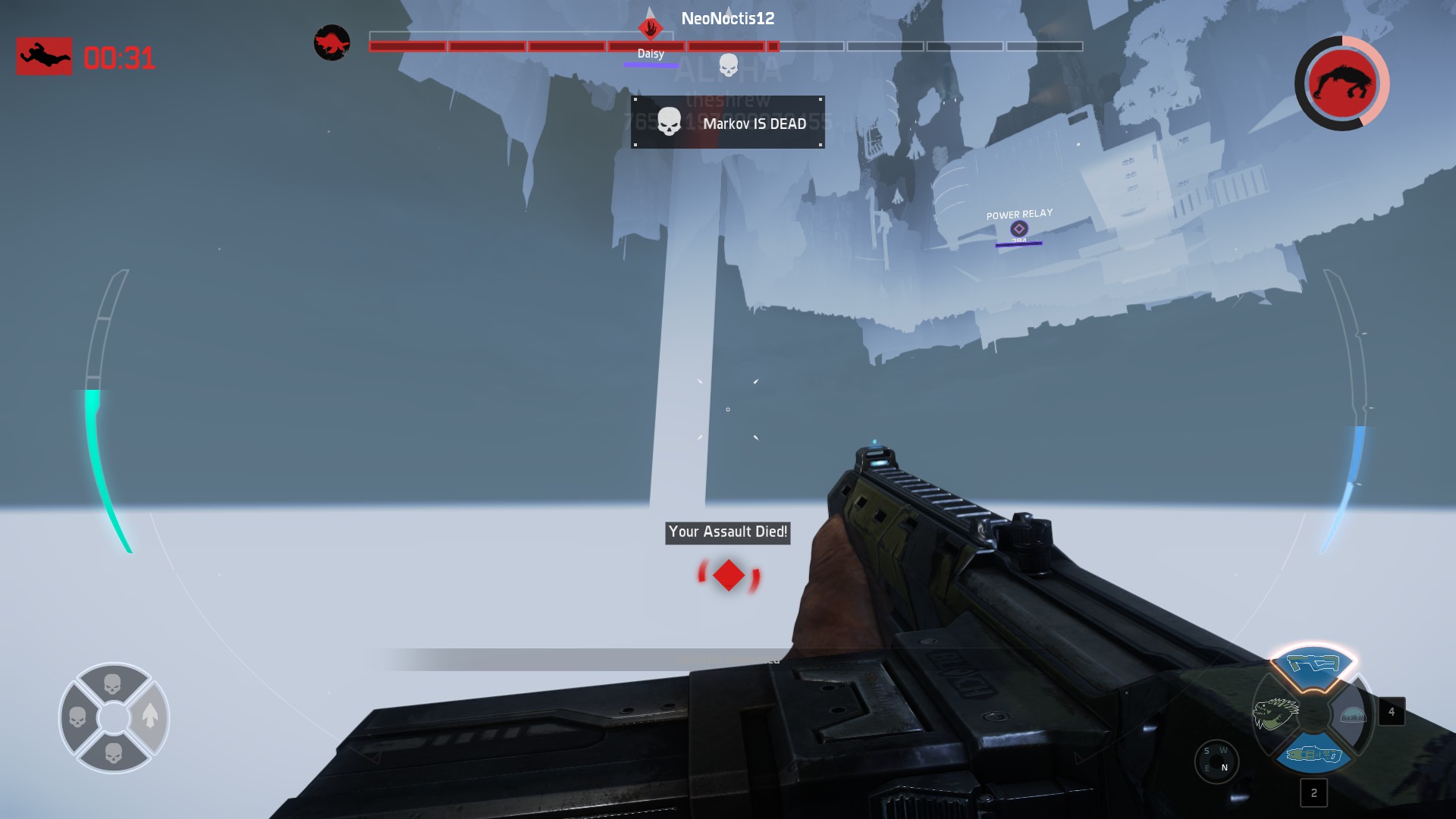 Above: Thankfully, the crappy jump mechanic doesn’t seem to occasionally make you fall through the planet, as I did in the beta.

Balance is an issue

Any gamer who has ever played a massively multiplayer online or MOBA title at launch knows that the game will change drastically in six months. Evolve is no different.

As players master the characters and explore their various mechanics, balance issues will arise. Turtle Rock and 2K will probably continue to tinker with Evolve for years, as presumably new monsters, hunters, and maps will force the experience to, well, evolve.

Many players took to Turtle Rock’s forums during the last open beta to voice their disapproval about the Wraith, which uses a nasty teleport skill to whiz in and out of fights. It is with great sadness that I must tell you that the Wraith is still broken. Inexperienced players will not lay a finger on the extremely mobile monster, and those with some skill will likely fall for its disgusting decoy skill.

The third tier of hunters are also strong. This might be by design, which makes some sense. These talented hunters are a gift for those who toil long enough to unlock them. But I am not quite sure if it’s a positive thing for Abe to be much stronger than Griffith. They are both the same class and should do the same thing, so why can one do it a lot better? A team of tier-three hunters will be nearly unstoppable against most veteran monster players, even if they are using the Wraith.

I love the concept behind Evolve, and Turtle Rock delivered in a big way. Its unorthodox playstyle cleverly uses conventional controls from our favorite shooters and MOBAs to keep players feeling safe. It’s brooding presentation inspires a lack of hope in those leaping to certain doom from the hunters’ space ship.

But it doesn’t offer enough yet, and what content options it does have is cloaked behind a clunky menu that doesn’t permit players to hop into its varying modes. Evolve had a beautiful start, but now it’s time to add to it. We need a queue for players that want to play one round of the nest, rescue or defend modes. We need more character choices, maps and play modes.

If those demands are met, Evolve’s value will skyrocket. Until then, I can only assign a score to the game in front of me.

Evolve was released for the PlayStation 4, Xbox One and PC on Feb. 10. 2K Games provided GamesBeat with a PC Deluxe Digital Download version of Evolve for the purposes of this review.