The modern game industry is frequently compared to the rags-to-riches era of the Gold Rush. And Adam Boyes, the CEO of Iron Galaxy Studios and former developer relations chief at Sony’s PlayStation business, made that comparison again yesterday at the Montreal International Game Summit.

In a keynote speech at MIGS 2016, Boyes went further than usual with the comparison, pointing out the series of mini gold rushes that came on a regular cadence during the history of the American and Canadian pioneer days.

Boyes traced the history of his own ancestors, including one named John Walters, as they migrated westward. He said that journey seemed crazy and fruitless at times, with maybe 200 people getting rich during gold rushes that attracted 40,000 people. That compares well to the modern game industry as entrepreneurs hop from one platform to the next, from console to Facebook to mobile to PC to virtual reality. Each era represents a new stage in the gold rush, with only a few striking it rich. 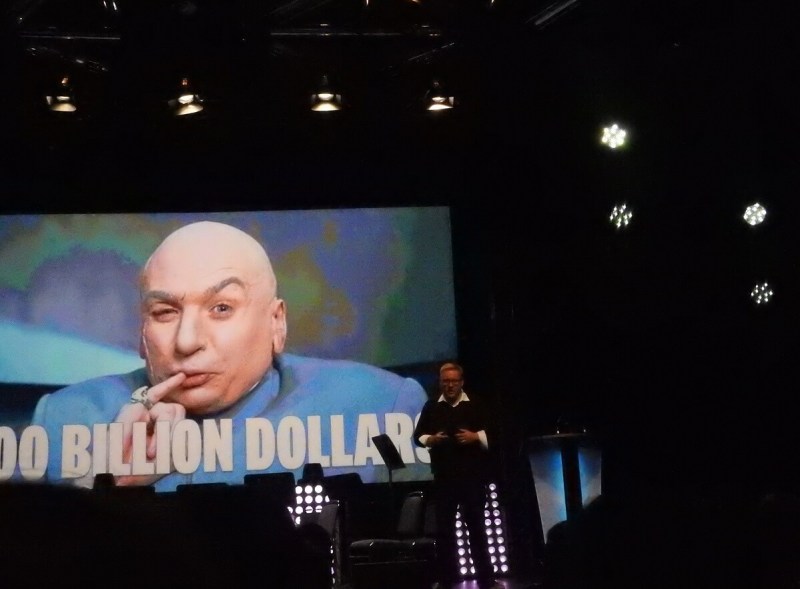 Above: Adam Boyes says the game industry is “a hundred billion dollars!”

“It’s an incredible time to be a game developers,” Boyes said, noting, in his best Dr. Evil imitation, that the game industry has grown to be “a hundred billion dollars!” Not only are new platforms being born, but new markets like China and India are taking off. He noted that virtual reality is expected to hit $1 billion this year.

“The fact you can take VR on the go is really transformative to how we interact with VR,” he said. “We have a more immersive high-fidelity system that you can keep in the house. Bringing someone else into VR who has never tried it ever is the greatest thing.”

He pointed out that game acquisitions are happening with unheard of valuations. The deals where Microsoft bought Minecraft maker Mojang and Activision Blizzard bought King exceeded the value of Disney buying Lucasfilm and Marvel. 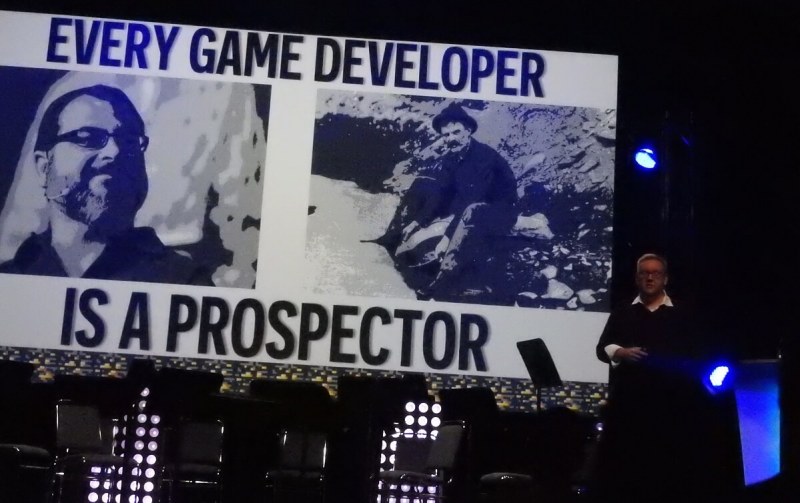 “Who would have thunk in our life that Minecraft and Candy Crush would get purchased more than Iron Man, Captain America, Darth Vader, and Luke Skywalker?” Boyes said.

Every game developer is a prospector, looking for that kind of gold. But he pointed out that not everyone gets rich. There are a lot of fears about indie doom or an indie apocalypse. He noted that United Front Games and Roadhouse Interactive shut down recently. There are so many “broken dreams” in gaming at the same time there are jackpots.

Sometimes the point isn’t to get rich but to learn and survive and produce something that you’re passionate about.

“What do you want to prospect for?” he said.

That’s when Boyes went off on what seemed a long digression, only to come back to his central points about the gold rush, the pioneers who survive it, and the homesteads they eventually create for themselves that have nothing to do with finding the gold.

One of his ancestors gave up a British Army pension in exchange for a free trip to the New World. Though blind, he managed to migrate to Canada. Then, Boyes said, the Toronto family raced to the California Gold Rush of 1849. They stopped being lumberjacks and made their way to California by taking a boat around South America. They had to deal with cramped quarters and scurvy just to make to California, where they arrived too late to make any money. They became ranchers but drove their cattle northward when they heard about a gold rush in British Columbia. 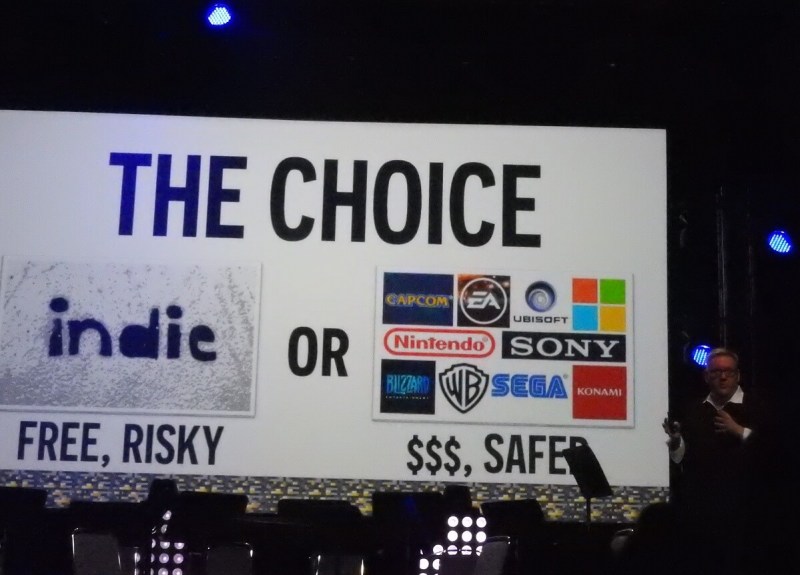 Above: Game developers can be indies or triple-A gamemakers.

Once again, they arrived too late, in 1865, after all the stakes were claimed. They lost half of the cattle and set up three trading posts. When the Klondike Gold Rush started many years later, they were smart enough to stay home. But the Klondike strike in 1896 drew 100,000 people to trek to the most inhospitable place, Dawson City, in Alaska. Only 40,000 made it, and those that got there found all of the claims were taken. Lead poisoning, scurvy, typhoid, and scam artists preyed on those who survived. Most of those who stayed made a living doing what they did previously, like being dentists. Something like 200 people got rich, mostly by selling things like boats and pickaxes.

The lesson, he said, was that you have to accept that there may not be any gold at the end of your journey and that what you learn along the way is important. He said that even veteran game developers have to acknowledge that nobody really knows the answers. But everything you do makes you better, and you have to put yourself in situations where you have to figure it all out. There were times, he said, where he felt like a con artist, like when he was striking an exclusive deal with Activision for Call of Duty on the PlayStation 4. He was learning how to do it for the first time, and he learned that there are no wrong decisions.

“I want to prospect for inner happiness,” Boyes said. “I want to make games. That’s why I left for Iron Galaxy. In our industry, the gold is not finite. Go find your gold.”