Updated 2:56 p.m. Pacific with a correction that Elan Lee claims this project beat a Kickstarter record, not that Kickstarter confirmed to him that it had broken the record. 2nd update: 5 pm: Topped $1M.

A Kickstarter crowdfunding campaign for a card game dubbed Exploding Kittens has hit $1 million funding in a single day, dwarfing its goal of $10,000 and setting a record for a crowdfunded card game, its creators say.

Elan Lee, one of the creators of the Russian Roulette-style card game, claims that their game broke a Kickstarter record based on his calculations. The campaign hits its goal of $10,000 in a few minutes after starting at 10 a.m. today.

Lee was most recently ended a stint as the chief design officer at Xbox, a technology design position that was closely linked to Microsoft’s shuttered Hollywood TV studio, the Xbox Entertainment Studios. Lee previously cofounded highly creative companies such as 42 Entertainment, creator of the ilovebees.com campaign for Halo 2. He also started eDoc Laundry, which hid codes for a web mystery in T-shirts.

In the game, you put the deck of cards face down. You take turns drawing cards, and if you draw the Exploding Kitten card, you are out of the game — unless player has a “defuse” card that can trump the kittens with laser pointers, kitten therapy, and catnip sandwiches. You can also deploy a Tacocat, Abracrab Lincoln, Magical Meat Bikini, and a Catterwocky. And you can use action cards that do things like remove or mitigate the kittens. You can deploy the thousand-year back hair, peek at cards by rubbing the belly of a pig-a-corn, skip a turn by wearing a portable cheetah butt, or seek out the wisdom of a goat wizard. You have to decide which cards to play, when to play them, and which of your opponents to target. With every card you draw, the greater your odds of drawing the Exploding Kitten, and the more tense the game gets. 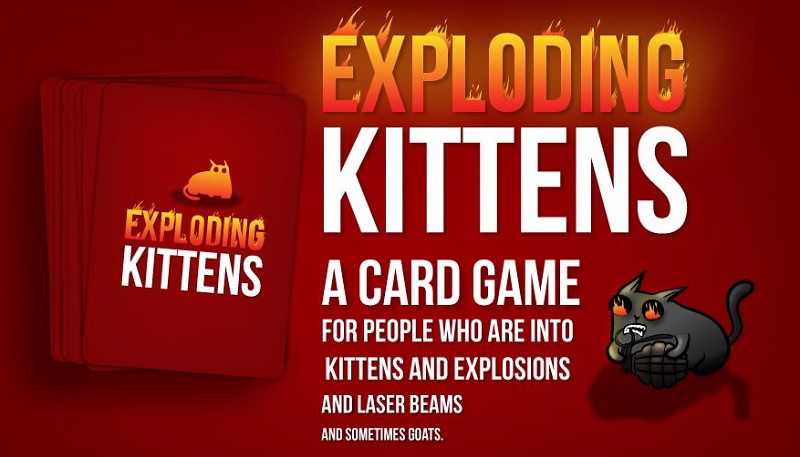 Lee said the game had an amusing genesis.

“This started out as fun when Shane came to me with an idea for a card game,” Lee said. “It’s Russian Roulette with a deck of cards. You draw until you get the Joker. It was no fun at all. There was no skill. So we sat around for a few weeks and tinkered with it. Like what happens if you reverse the order, or force someone to draw a card. It started out as fun, but then we decided to launch the thing.”

Lee showed it to Inman, who proceeded to play it with Lee for two days straight during a vacation in Hawaii. Inman said he would put everything else he was doing on hold if Lee would allow him to illustrate the card game, which was then called Bomb Squad. But Inman said they had to change the name to “something like Exploding Kittens, because cats are huge and I’m really good at drawing them.”

For the past two months, the team has been running fast. And since this is their first card game, they’ve gotten advice on how to proceed from the creators of Cards Against Humanity. They decided to do a Kickstarter campaign because they wanted a collaborative community to help them perfect it.

One of the challenges was how seriously to take the idea of Exploding Kittens. They thought of doing a gory game, but that didn’t fly. And they thought of making suicidal kittens, but that didn’t work, either. So they decided to make the kittens normal, where their curiosity gets them into a lot of trouble. They could walk across a keyboard and launch some nuclear weapons. Or they could chew at the ring of a grenade, Lee said.

“The kittens do what kittens do,” Lee said. “The game got really silly.”

For future release, the team has other ideas like a NSFW (not safe for work) deck and possibly some digital entertainment options as well. 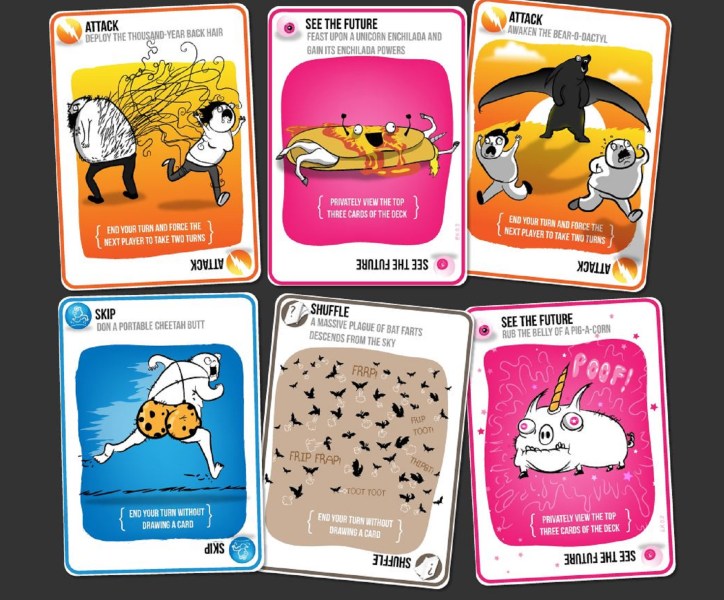