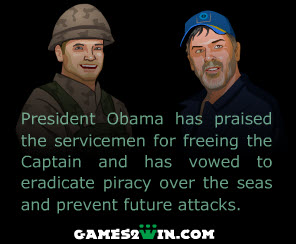 Reality games have a rich tradition of picking up on current events and using interest in them to sell games. The latest to do so is Saving Captain Phillips, a game by Games2win based on the US Navy SEAL rescue of Captain Richard Phillips from Somali pirates.

Is it shameful or educational? That’s the question these sorts of games always get, whether it’s a simple flash game like this one or an expensive, high-end game such as Konami’s upcoming Six Days in Fallujah. Another game involving Somalia, of course, was Black Hawk Down, which was not only a bestselling book and movie but also the subject of multiple games.

In this two-dimensional game, you watch some figures climb down a ladder from the Maersk Alabama into a lifeboat. Then you shoot the pirates by clicking with the mouse. It’s not so easy to hit them since they move around a lot. If you shoot the four pirates, you rescue the captain. The lifeboat isn’t being towed (and only three pirates were killed in the real event), so it’s not exactly accurate.

Alok Kejriwal, chief executive of Games2win (an Indian game company we wrote about last year), said the company wanted to build awareness of the incident among youth and honor the brave Navy SEAL snipers and the heroic captain. Of course, if the game is popular, the company can generate ad revenue from it. Other similar games are in the pipeline involving political, historical and global themes.

If the Somali pirates were smart, they’d launch their own version of a game from their point of view.