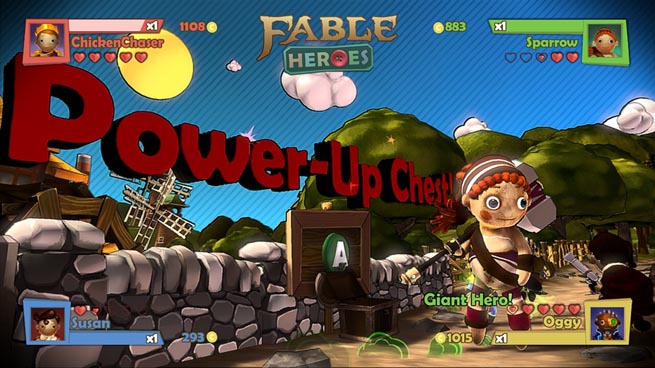 Fable fans have given this game some flak for not playing very much like Fable. It’s a fair enough criticism from a certain perspective — “hardcore, solo, role-playing game focused on moral choice and consequence” rests on more or less the exact opposite side of the game design wheel from “four cutesy puppets grab loot and clobber stuff.”

But like Juliet once said, what’s in a name? Fun is fun no matter what they call it, and Fable Heroes is a pretty good time. It’s a cooperative game but only up to a point. A lot of players will recall The Legend of Zelda: Four Swords Adventures, another “co-op” experience that cheerfully rewards the selfish, greedy, and mean. Four friends can get their ten bucks worth of fun here so long as they don’t end up at each other’s throats before it’s over.

Kill. Loot. Kill. Loot.
Fable Heroes lives somewhere in between a four-player side-scrolling beat-em-up (e.g., Teenage Mutant Ninja Turtles) and a four-player dungeon hack (Gauntlet). Four little puppet people team up to run from one side of each stage to the other, smashing cartoon versions of Fable monsters and grabbing whatever’s not nailed down. Each hero’s arsenal comes straight out of Final Fight as diverse as light jabs, stronger attacks, and all-around area effect blasts that eat up a chunk of health.

Players start the game with access to a few basic characters — a sword-swinging hero, a goon with a hammer, a gunslinger, a fire-throwing wizard — and eventually unlock access to several more. These adventurers have their quirks but break down into two basic categories: Heroes with close-range weapons have to run up and get stuck in with the bad guys while the ranged attackers can hang back and do their damage at a safer distance. This creates a basic trade-off. Do you want to stay alive, or do you want first crack at the loot? 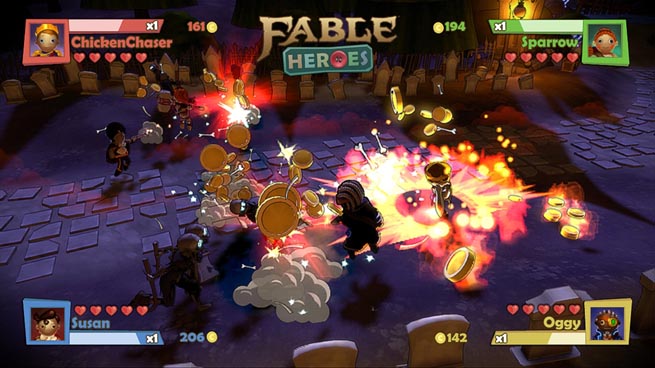 Loot is the point of the exercise. Beating up monsters is merely a means to an end — that end being the coins that fly every which way as soon as something dies or a barrel explodes or a chest gives up cash. At the end of each level, after the team beats a boss or blazes through a mini-game, a little meter totes up everyone’s coins and the winning player basks in fireworks and glory. Meanwhile, the hero in fourth place receives a sad little music sting, like a loser on “The Price is Right.”

Just as in Four Swords, then, it only looks like everyone is fighting toward a common goal. In truth, it’s a race to grab the loot before the other guy. This is great fun if a little bit stressful. Heroes is one of those games that shows off a player’s real personality. Nice, quiet people drop the mask and reveal themselves as coin-snarfing demons.

As such, playing Heroes with friends on the couch is a lot more interesting than teaming with strangers on Xbox Live. We expect people on Live to be thieving jerks. It’s not the same as seeing a best pal make a treacherous grab for your loot. 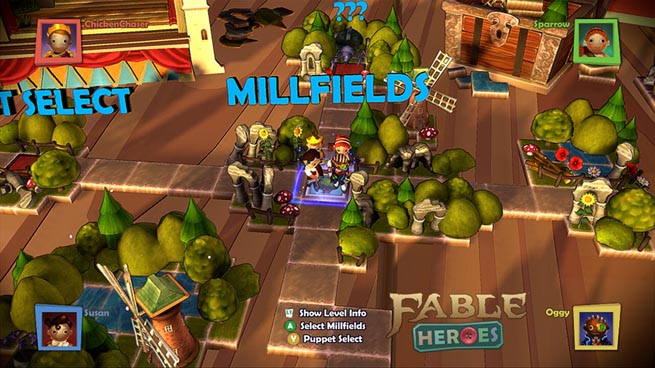 Smart game systems
Underneath the basic, familiar beat-em-up gameplay, Fable Heroes has some ingenious ideas for extra features and sub-systems. The project started life as an experiment run by five staffers at Lionhead Studios, and it has that sort of feel to it – something that came out of a “wouldn’t it be cool if we…” brainstorming session.

Coins aren’t just the way Fable Heroes keeps score. Naturally, you can buy stuff with them, too. In between stages, players take turns rolling dice and trotting their heroes around a little Monopoly-looking game board. Landing on a space reveals a few options for spending coins and gaining permanent power-ups, including all-around bonuses for attack power or speed and extra-special advantages against particular kinds of enemies. The board-game presentation is a cute idea — more involving and fun than just picking from a list of options in a store menu.

Meanwhile, Lionhead chose to handle character death in a way that might be the cleverest idea in the game. Players who run out of health don’t disappear or even stop fighting. They stick around as ghosts and keep slugging away with the rest of the party. (Apparently they’re the kind of ghosts who can still interfere with the corporeal world using hammers.) So why does it matter if you live or die? Well, ghosts can fight…but they can’t grab loot. Dead players don’t get to snatch more coins until they find a health power-up and bring their bodies back.