Five years after its release, Clash of Clans continues to be one of the top 10 grossing games on the app stores. And Facebook and Clash of Clans creator Supercell are teaming up to promote the mobile strategy game with an augmented reality experience on a smartphone.

A week ago, Supercell revealed a video that showed the Builder, the funny character who creates structures in Clash of Clans — only to see the structures destroyed — left for greener pastures. He wants to find a place where his creations might last longer than the next battle. (Supercell said more than 100 billion town halls have been destroyed in Clash). That video received more than 38 million views. And since AR is still a novelty for users, the AR promotion has a better chance of engaging them.

And now the Builder will appear in augmented reality, using Facebook’s AR studio. Players will be able to put themselves in the Builder’s shoes. When they point the camera at themselves, they don the Builder clothes, complete with his grin, bushy eyebrows, and hat. And when they flip the camera around, they can place the Builder in the real world. 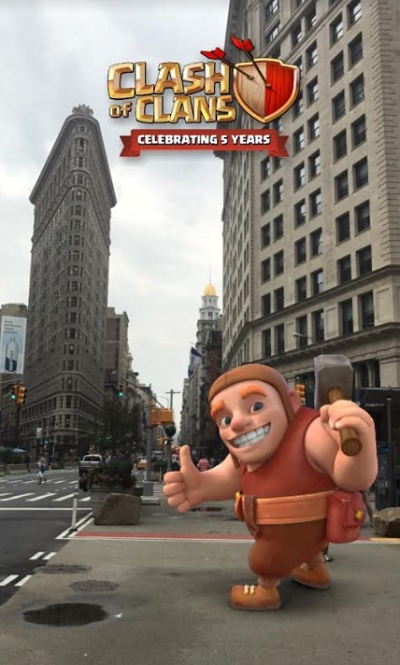 Above: The Builder in augmented reality.

“This is a way to celebrate the game through the camera,” said Leo Olebe, director of global games partnerships at Facebook, in an interview with GamesBeat. “As Facebook, we always look at engagement. One clear measurement will be how much this gets used, and how much people share it. Another measure is brand engagement, like how are we having conversations about this.”

Facebook’s AR studio is about getting people to celebrate what they love and letting them share it, Olebe said. Facebook announced AR studio at its F8 event. Ahead of the Electronic Entertainment Expo (E3) game trade show in June, Electronic Arts rolled out the first games integration using Facebook’s AR studio for Mass Effect: Andromeda. Players could select characters and an array of options to transform into and share with their friends. The effect also integrated in-game stats so people could compare their multiplayer match results with friends.

Ahead of E3, EA/BioWare rolled out the first games integration using AR studio for Mass Effect: Andromeda – players could select characters and a wide array of options to transform into and share with their friends. The effect also integrated in-game stats, letting players view and compare multiplayer match results with friends.

And outside of games, Rimmel London, a cosmetics company, launched an effect that lets users cycle through and try on different eyeliner looks, take a photo and share it to Facebook Stories. And in late July, Nike also rolled out an AR Studio effect that lets runners track and share recent running routes and milestones with friends.

Facebook hasn’t yet released any usage numbers for AR. If AR succeeds in boosting engagement with users, then it can fend of challenges from rivals such as Snapchat and keep growing both its overall engagement and users.

“AR is only going to get bigger, as the camera transforms your reality into a fantasy,” Olebe said.