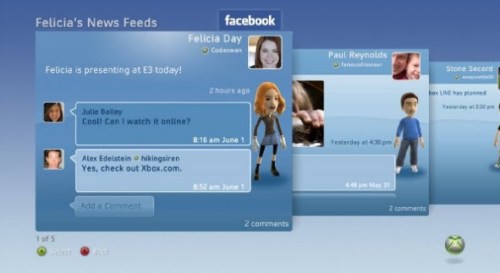 Microsoft scored a coup last November when it debuted Netflix movies on the Xbox 360. Now it’s Facebook’s turn. Microsoft will now integrate the Facebook social network into the Xbox 360 dashboard. You can now view photos, make friends, and otherwise interact on Facebook directly from the game console.

Facebook Connect will be integrated with the Xbox 360. That means you can post screen grabs of your exploits in games on Facebook from within games such as Electronic Arts’ Tiger Woods golf game. [Update: You can also link your Xbox Live gamertag, or online identity, to your Facebook account, said Garth Davis, program manager for games at Facebook. Davis said that means you can tell all of your Facebook friends what your Xbox Live name is so that you can add more friends to play games with on the Xbox 360.

Davis said the service will launch in the fall after Microsoft finishes creating software for the Xbox Live dashboard to enable the Facebook connectivity. Also, it’s going to take time for game makers to integrate the Facebook communication into their games, since Microsoft has to build the capability into its software development tools.

Davis declined to say whether Sony was doing something similar. Microsoft probably has a better relationship with Facebook because it’s an investor in the social network. But Sony could likely launch its own version for the PlayStation Network, considering that Facebook Connect is an open platform.]

In another nod to social media, Microsoft said players can also post on the micro-messaging service Twitter from the Xbox Live game dashboard, so you can Tweet your friends while playing games. Both are coming this fall.

The whole idea is to create entertainment experiences beyond games so that the game console becomes the gateway to all entertainment in the home. This is part of the reason Microsoft got into games in the first place, a vision spelled out by Bill Gates in planning for the original Xbox.

Also in this vein, Last.fm, a music discovery service with more than 30 million members, will come to Xbox Live this fall.

The music service will be free of charge for Xbox Live Gold members, who pay $50 subscription fees. British TV broadcaster Sky will also offer live TV on the Xbox 360 in the fruition of Microsoft’s IPTV strategy in the United Kingdom. That means that Sky will deliver TV programming over web-enabled phone lines and Microsoft’s software will display it via the Xbox 360. Microsoft wiill integrate Zune HD videos into Xbox Live this fall.

Also, now Microsoft will be able to stream video and movies to Xbox 360s with “instant on.” That means even 1080p high-definition videos can be viewed instantly, with no download time delays, over Xbox Live. You can also join friends in a virtual room to watch movies at the same time.