Playable ads debuted four years ago as a new way to entice gamers to play mobile games. The ads were interactive, allowing people to try a game out before they downloaded it. And after a lot of testing, Facebook is finally blessing playable ads today by launching its own version of it across its platforms.

Rick Kelley, vice president of gaming at Facebook, said in an interview with GamesBeat that advertisers will now able to pitch games using playable ads, which are interactive ad experiences in app-install campaigns on Facebook. Such ads are a lot more effective because they give a player a good idea of what the game entails. And once such players download the app, they’re more likely to play it because they know it’s something that they already liked.

“With 6 million apps on the app stores, it’s super hard to get discovered,” Kelley said. “Companies are shifting from volume to quality users, and it’s imperative we give them the tools to do that.”

Playable ads drive higher-intent installs from people who have experimented with the game and are therefore more likely to play after installing. Combining the interactive ad experience with Facebook’s ability to show ads to the people most likely to be interested in your game can help game marketers drive qualified installs.

Facebook’s version of playable ads are a little different, launching a video of the game first and then showing interactivity, Kelley said. It also uses HTML5, the lingua franca for the mobile web.

“The result is a more rich experience,” he said.

Kelly acknowledged it’s late in coming, but Facebook’s playable ads were in beta for more than a year. 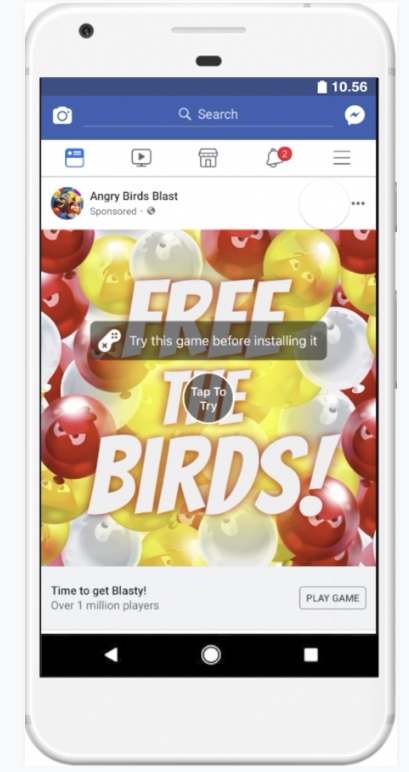 Above: You can try games out before you install them with playable ads.

And Facebook is introducing retention optimization. Retention refers to the percentage of players who return to a game after certain periods of time, such as a day, or a week. And with mobile games, retention isn’t easy, with 4 percent to 5 percent coming back after the first 30 days after downloading an app, according to AppsFlyer.

“If you are paying for installs, that’s not good,” Kelley said.

So Facebook is testing a way to optimize retention to help game developers find highly engaged players to ultimately achieve a better ROAS through higher ad and subscription revenue.

Retention optimization works by using the “app launched” event sent from the Facebook software development kit (SDK) to estimate the likelihood of a player opening the app on day two or day seven after the app is first installed. The ad’s bid is then automatically adjusted based on this estimation, allowing game marketers to deliver ads to people likely to use the app more often, and in turn helping businesses monetize their app better.

“Facebook’s retention optimization solution helped us acquire users with much higher retention rates with a 14 percent better return on investment (ROI) compared to install optimization when looking at cost per day seven retained user,” said Kisup Lee, CEO of Bitmango, in a statement. “Moreover, our installation volume has increased with Retention Optimization compared to our previous campaigns.”

Retention optimization is currently in testing with select app advertisers, and they’re planning to roll it out more broadly later this year for ads on Facebook, Instagram, and Audience Network.

Facebook is also introducing value optimization, which helps developers spot their most valuable users and reward them.

Players who make in-app purchases are extremely valuable to game developers because paying users who remain active in a game tend to increase their spending over time. In fact, recent research by AppsFlyer and Facebook found paying gamers in the United States spend on average $20 in-app by day seven after installing a game. That goes up to $49.33 by day 90.

Facebook launched value optimization last year to help businesses drive more efficient ROAS by optimizing ad campaigns for their most valuable users. Since launch, gaming advertisers said they want more control over their campaign performance to ensure they achieve their business goals. That’s why Facebook is now adding minimum ROAS bidding to give advertisers the ability to set a minimum benchmark for their return on ad spend when using value optimization.

“Being able to set a minimum ROAS is critical for us to ensure we’re spending each of our clients’ dollars efficiently towards users who drive the most value as defined by their business, without sacrificing upside performance,” said Manuel Pacreau, head of operations at Addict Mobile, in a statement.

Value optimization with minimum ROAS bidding is rolling out globally over the next few weeks for ad campaigns on Facebook, Instagram, and Audience Network.