Facebook has provided updates on its progress with its major gaming initiatives: Instant Games, Gameroom, and Gaming Video. That’s all part of its vision to become the place where people play, watch, and share games.

The company made the announcements today at its F8 annual developer event in San Jose, California. In an interview with GamesBeat, Leo Olebe, the director of game partnerships at Facebook, said that people have played Instant Games 1.5 billion times in the past 90 days.

Instant Games are based on the cross-platform HTML5 format, and they can run without being downloaded to a specific device. They were introduced in November last year. Fans can embed them in their Facebook news feeds or Facebook Messenger feeds and get their friends to play instantly. There are now more than 800 million people playing games on Facebook or playing while logged in to Facebook, up 23 percent from 650 million a year ago, Olebe said. And Facebook wants to keep that momentum going.

“It’s going to be a pretty grand year for Facebook games,” he said.

Facebook is giving developers more control of the games they create. They can customize their own start and end screens and integrate new application programming interfaces (APIs) that can help drive share and connected gameplay.

Olebe said that rich gameplay features are laying the groundwork to support a wider variety of games that extend beyond the lightweight, score-based games currently offered on the platform.

A new version of EverWing (from Blackstorm Labs), along with Words with Friends from Zynga, will be launching on Instant Games in the coming weeks. In a Messenger game, you can touch the joystick icon and challenge someone to play. You can play immediately, rather than wait for a download. 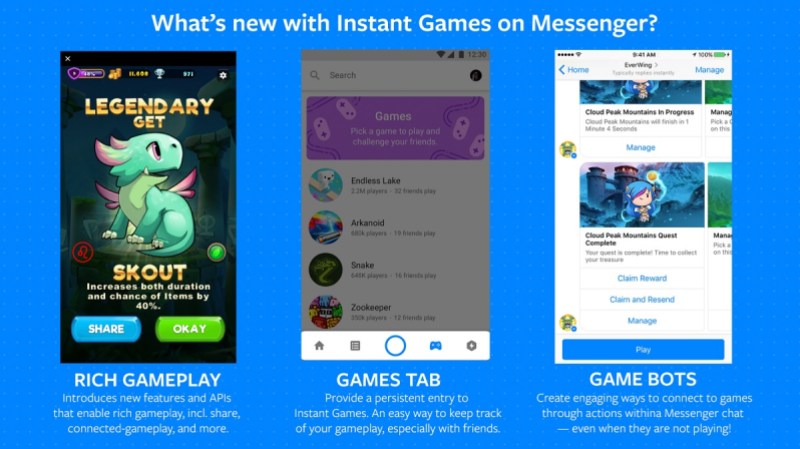 With the forthcoming Instant Games launch of Words With Friends, Zynga will allow players to share great in-game wordplay moments (or fails) directly within their Messenger threads.

Blackstorm’s new EverWing will make in-thread updates available in Messenger that give people a preview of what’s happening in-game, which is especially useful for players who are deciding whether they should jump into a boss raid that’s already in progress. (Ernestine Fu, the cofounder of Blackstorm Labs, will speak about Instant Games at our upcoming GamesBeat Summit 2017 event).

Facebook will also start rolling out a new “games tab” to make it even easier for players to discover games. Players can use the tab to return to Instant Games and track gameplay with friends.

“It is now front and center of the Facebook experience,” Olebe said.

Additionally, Olebe said that developers will be able to use bots to create engaging ways for players to connect to their games through actions they take directly within a Messenger chat — even when they are not playing. The game bots can do tasks like fulfill quests, collect rewards, and remind you when you need to do something, Olebe said.

In a partnership with Unity, Facebook announced the commercial release of the new Facebook build target in Unity 5.6 last month. It enables Unity developers to streamline the deployment of their games to Gameroom, which is a hub for all things gaming on Facebook.

Gameroom supports PC games optimized for native performance and web games built via HTML5, WebGL, or Flash technology. Available for Windows 7 and up, Gameroom has more than 1,000 games across more than 10 different categories. Among the new features is support for downloadable premium games.

To enable more developers the opportunity to bring their games onto this emerging PC gaming platform, Facebook is rolling out a closed beta of the new Gameroom platform software development kit (SDK), which will offer developers the flexibility to port games that are built in a variety of engines, including Unreal Engine, Cocos2d, and more.

Facebook is working with High Voltage Software to bring Dragon Front (which debuted as a virtual reality game on the Oculus Rift) to the platform. A 2D version of Dragon Front will launch on Gameroom in the coming weeks. 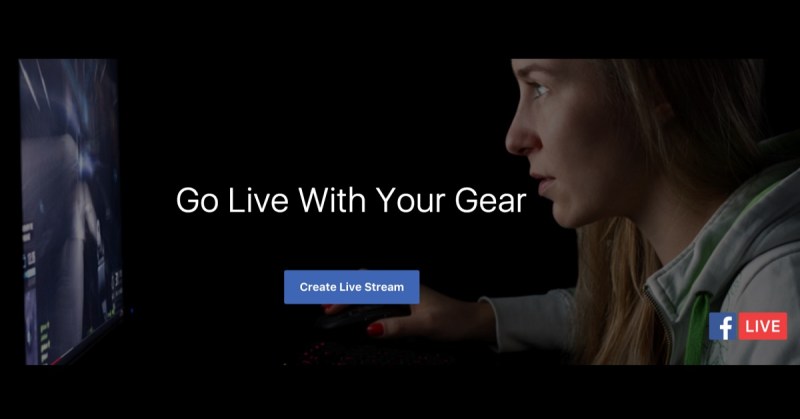 Facebook is also in the early stages of rolling out Gameroom’s new Games Feed, which offers players a continuously updating list of stories on games. Facebook wants to improve discovery for developers by helping people find out about different games they may enjoy. The Games Feed features studio-created posts, videos like producers’ chats, and general games news.

In competition with Twitch, Facebook recently announced that players around the world can broadcast live video to Facebook from their desktop. The company is now enabling players to bring their gameplay experiences to Profiles, Pages, and Groups. The goal is to enable gamers and streamers to connect with each other and the games they love in more meaningful ways.

At F8, Facebook is also announcing that platform partners using the Live API will soon have the ability to share directly to Groups with XSplit, a livestreaming and video-mixing application made by SplitmediaLabs. Facebook is looking forward to the application’s launch of the feature and how it will build new functionalities to existing Live API integrations.

Lastly, Facebook said that the Philadelphia 76ers’ Team Dignitas is the latest esports pro team to engage and find new fans on Facebook.