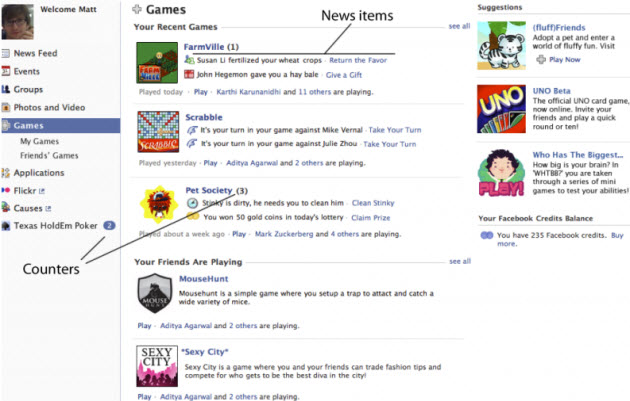 Facebook is in the midst of redesigning how users find, interact with, and keep track of games on the social network. Called the “Game Dashboard,” the new feature is Facebook’s attempt to play nice with social game developers, serve the interests of gamers, and at the same time stop games from ruining the experience for everybody else.

The company is reining in the worst abuses of Facebook game companies, which have polluted the network’s communications with spam-like messages that general users have begun to ignore, such as “Joe Smith wants to thank you for chasing crows out of his pumpkin patch.” Facebook has announced that these “push notifications” will no longer be put into the notifications channel, which is one of the ways that apps currently communicate.

If Facebook does this previously announced redesign right, it will lead to more app usage and allow developers to keep growing. But if it does it wrong, then it will effectively shoot the golden goose, slowing the growth of game publishers such as Zynga and hurting other third-parties as well. The Game Dashboard will thus have a significant effect on how Facebook generates future revenue.

Gareth Davis, platform manager for games, said the Game Dashboard is going through iterations of its design and nothing is final yet. He said the dashboard will launch in January. Much like Facebook’s toughening stand on special offers, these changes are putting social game makers into a nervous wait-and-see mode, making it a difficult time for them as they adjust to a tectonic shift. But observers have said they think they will have long-term gain, short-term pain from all of the changes.

“We are all in the throes of major changes on Facebook now,” said Roy Sehgal, general manager at Zynga, said at our recent DiscoveryBeat conference. “They are all going to be great changes because they focus on the user experience. They are going to be great for discovery of apps. They will happen fast. They will force us all how to rethink our games.”

At the same event, Sebastien DeHalleux chief operating officer at Playfish, said he accepts the fact that Facebook thinks of itself not as a web site but an ever-changing service that has to continuously improve its relevance to users.

Under the redesign, rather than appearing in your notifications channel, games can tell you what you need to know in different ways. They can put an email in your email inbox. This will take the game spam out of your hair unless you’ve indicated you want it. And that’s the way that non-gamers like it. But for gamers, this could make it harder to tell when something is happening in a game (although there are other ways to track activity — a counter”, for instance, can tell you how many actions you have to take or acknowledge in a game or app that you have bookmarked on your Facebook page). With the redesign, all of your invites for apps will also be stored away in a tab dubbed “invites” that you must click on to view.

In that sense, Facebook is putting a stop to the spam-like messages game developers send out to attract new users to their games. At the same time, though, Facebook is creating a new page that gives game players all of the information they’d want to know about the games they’re playing.

Facebook says on its own developer page that “the goal of the Games Dashboard is to make it easier for users to find games on Facebook, including games played recently and the discovery of new games through friends.” But Facebook may want to take a lesson from Microsoft, which created a Windows “game manager” for Windows Vista that didn’t work and angered a lot of game users.

The Dashboard will display your most-recently played games. If you click on the name of a game, it will take you into that game’s canvas page, where you can find out about it and play it. The canvas page will make it clear to users if they are playing an app created by a third party. The final look for this page is still under development. The Dashboard will also feature Game News, which tells you things like “You are ranked 17th among your friends in Mafia Wars.” And it’ll tell you what your friends are playing.

Alongside the Game Dashboard is the Application Dashboard, which can tell you about the non-game apps you’re using. But Facebook is creating the Dashboard for games because it is well aware that games are the top apps being used. About two thirds of the top 15 apps are games, according to AppData. Developers can’t have an app be on both dashboards. They have to classify it one way or another, and Facebook will review the classifications.

Facebook is also, as others have reported, testing its own currency to be used in games and other apps to buy virtual goods. Right now, lots of third parties compete with each other to offer these virtual currencies. These middlemen, such as PlaySpan, take a cut. But Facebook, as the platform owner, could force the app developers to use its own native solution. That would hurt the third parties, but it could also create a universal virtual currency that could be used across games and apps. John Pleasants, chief executive at Playdom, said he was pleased with what Facebook was doing with its credits system and that it would be great if it changed user behavior.

“It should be able to double conversion rates [of getting a player to pay for something in a free app], which are around 5 percent and it would be great if we could get to about 10 percent,” Pleasants said. “It’s all about reducing friction in the system.”

Game publishers and developers are giving Facebook their feedback. So it’s a very good time to know people at Facebook. But the move by Zynga to create its own FarmVille.com web site is telling. You still have to use Facebook Connect to play FarmVille on that site. But there is some sense that this site allows for more independence. It shows that third-party developers realize that being totally dependent on Facebook, which can change its platform at will, is not a good idea. If Facebook screws up, the third parties will move to a more friendly platform.

So Facebook has to walk a fine line of making its 350 million users happy, keeping its game developers happy, and pleasing gamers as well. The creation of the Games Dashboard will no doubt show us how far Facebook can go. Is it supplanting Xbox Live? Will it replace game consoles?

The Facebook Game Dashboard could be the beginning of something very important in the video game industry. That’s for sure.