Facebook announced Thursday evening that it has made updates to its platform to improve game usage and discovery of new apps.

The social network said it made changes to the platform based on tests that showed it could drive re-engagement and discovery higher. The changes are part of constant tinkering that the company does to prompt users to return to their games or click on new titles. If they work, they could generate more usage and profits for game companies.

Facebook has now increased the number of bookmarks at the top of every canvas page (a page where you’re playing a game) from four icons to six. Those icons show you the notifications (pictured left) for each game you’re playing. Early results have shown that this has increased referrals from canvas bookmarks to games by 20 percent. 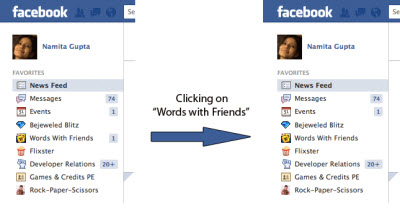 Facebook also updated bookmark counters on the home page to clear automatically once clicked, similar to how notifications behave. Facebook has also combined the Games and Apps dashboards into a single dashboard, called Apps and Games. That dashboard will let users see all their requests and invites on a single page, making it easier to find new games and the games friends are using most and have recommended.

Facebook has also begun testing aggregated game stories for mobile platform apps to drive traffic from mobile devices to games. Gamers and non-gamers will both see stories for the games their friends are playing the most. And Facebook published a Games Tutorial to help developers get started building social games. Earlier this month, Facebook hosted a Social Games Hack at its headquarters, and it has now provided tips for best practices in making games.