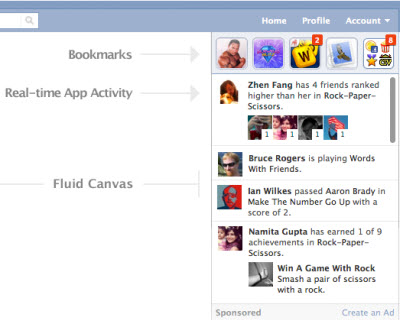 Fighting back against Google’s new social game platform, Facebook announced its own game announcements today. The enhancements are part of a larger set of improvements for Facebook users.

The social networking giant is making the announcement today in part to try and keep the focus on its own platform, rather than the new Google+ game platform announced today by its competitor, Google.

Facebook announced some enhancements such as the ability to post announcements about particular user achievements on your friends’ Facebook pages. If you pass up your friend’s score in a game, you can easily brag about that and make your friends more competitive. You can also boast about your movement up a game leaderboard. Facebook users can also utilize new bookmarks on the home page to see their top apps more easily.

Arjun Sethi, a top executive at 6waves Lolapps, one of the biggest Facebook game developers, attended an event tonight where Facebook described the enhancements.

“They’re really focusing on engagement and retention of the user,” Sethi said in an interview. “They have a qualitative and quantitative way to deliver better discovery of games for developers.”

That means that game players might become more engaged in noticing the new games that are promoted to them or appear on their home pages, Sethi said. So far, 6waves Lolapps is paying attention to Google+ games, but its main focus is still making Facebook games, he said.

As pictured, you can also see exactly what your friends are playing or doing on Facebook in a real-time “app activity” ticker window on the upper right corner of the page now. Users can also see a bookmark for a person’s top apps listed, so the player can quickly go back to the app when they want to do so. Facebook will also allow developers to expand the size of their games on the page so that players can have a more immersive experience. Lastly, Facebook said that it is driving quality distribution to its game developers, mainly through improvements that get game promotions in front of the right gamers at the right time.

But Facebook is drawing attention to other successes beyond Zynga. Stung by criticism that Facebook and Zynga have too cozy a relationship, Facebook is trying to point out that there are a lot of other players that are part of its game ecosystem.

Overseas growth has been good as well among Facebook developers.