Facebook is on the web and mobile, but it’s increasingly making its money from the latter. Likewise, social-game developers are starting to generate more revenue on mobile platforms like iOS than they are on Mark Zuckerberg’s social network. But Facebook isn’t freaking out about developers making money on mobile — it is embracing it.

Facebook revealed an update to its SDK (software development kit) for Unity today. Unity is a free and powerful game-creation tool that is popular with indie developers and small studios. Facebook’s SDK for Unity makes it easier for developers to take advantage of the social network’s platform for acquiring users, generating revenue, and more. Today’s update, however, is all about improving the cross-platform functionality of the Facebook SDK for Unity, which is now out of beta. 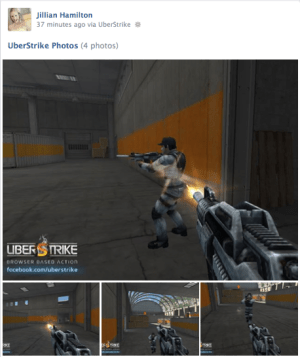 “The Facebook games team is focused on bringing high quality games to Facebook users,” Facebook games engineer Brian Jew wrote in a blog post. “One way we’re doing this is by building tools to help developers provide social experiences in 3D games, like those built with Unity. We’ve made our SDK for Unity even easier to integrate with cross-platform games and added new features to help you grow your games.”

Some of those new features include full support for the latest versions of iOS and Android. This means developers can use Facebook’s app events to see how effective an ad campaign is on mobile. The SDK for Unity also makes it easier for studios to integrate screenshot-sharing in their game.

Facebook gave an example of developer Cmune’s Uberstrike, which uses this screen-sharing feature. Uberstrike players share around 65,000 pictures a day, according to Jew.