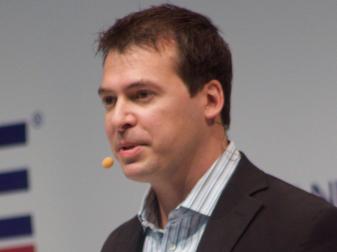 Facebook has been so focused on growing its social network of 500 million users, you would never know that it is operating one of the biggest game platforms in the world. So far, the company has organized itself around its platform, not the vertical segments within the platform.

Even though games are a huge part of its business, Facebook is not organized like other game platform operators such as Sony, Nintendo, and Microsoft — even though it probably has more gamers than each of those companies. But Facebook is taking one baby step in that direction, as it plans to hire someone to be the head of its game partnerships. That person will report to Ethan Beard (pictured), director of the Facebook Developer Network.

It’s about time for that kind of move. More than 200 million people play games on Facebook every month. The biggest app on Facebook is FarmVille, a game made by Zynga, which is a social game company and is Facebook’s largest partner. Facebook really ought to listen more to its biggest constituency and deal with the concerns of that group in a more intimate and transparent fashion.

“Gaming is very popular on Facebook and important for us,” said Beard, in an interview. “Hundreds of millions of our users are playing games. We continue to invest resources in teams and product necessary to make our platform a good one for game developers and gamers.”

The job is a senior level post. Beard would not specifically address the management chain, as Facebook already has a platform manager, Gareth Davis, who oversees the game business within Beard’s division. So it’s not clear whether Davis would report to this new manager or not. At companies such as Microsoft, there are numbers of people dedicated to the company’s Xbox 360 game platform. Microsoft also has an account manager to deal with each big third-party game publisher that publishes games on the Xbox 360.

Facebook isn’t there yet. It does not have a dedicated game manager assigned to deal with Zynga, Playdom or EA Playfish — the biggest companies in social gaming. The company has 1,400 employees that work in large, cross-functional groups that work on creating the overall platform.

But Beard acknowledges that the company is evolving. There are people within his group who are knowledgeable about games and work directly with the game developers. They also talk with those within Facebook who are creating the roadmap for the platform. One of the problems that game developers have raised about Facebook is that it can switch directions without telling the app developers, even though those changes can have a huge impact on the business of those developers. Beard said that game developers want more predictability from Facebook and his goal is to provide as much transparency for platform changes as possible.

“We are a much younger company, and our open platform is only three years old,” Beard said. “We have evolved from the classic two guys in a garage. As those social game companies have grown up, we have to evolve what our team looks like as well. Hopefully, we will become more and more predictable when it comes to games.”

As for the position itself, Beard said, “It’s a great opportunity for a superstar to shape how we work with our partners in the social gaming space.”

There are other game-related positions open at Facebook, but Beard isn’t saying exactly how many there will be.